U.S. Now Has Largest Oil Reserves in the World, Thanks to Fracking

A new study by Oslo-based group Rystad Energy has found that the US holds more recoverable oil reserves than both Saudi Arabia and Russia.  That means that we have the largest oil reserves in the world – and it’s all thanks to hydraulic fracturing. 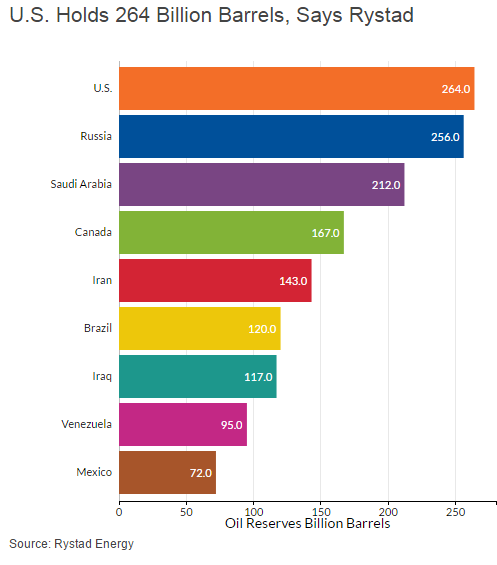 The study estimates that more than 50 percent of remaining oil reserves in the US is unconventional shale oil. Advances in hydraulic fracturing technology in recent years have allowed producers to tap those large shale reserves, making the US one of the most energy secure countries in the world, while simultaneously reducing the environmental footprint of drilling.

So much for the “Peak Oil” theory that US oil production would soon enter permanent decline and that we would run out of oil in a few years.

The Rystad study is not only a triumph for the American energy industry, but for America as a whole. For many, the OPEC oil shocks of 1973 still stand clear in memory. Even through recent years there has been concern regarding OPEC’s power over the global market and, by extension, American consumers. But US oil and gas production has continued to thrive as OPEC’s positon has diminished. The new study is yet another affirmation that the US has wrested back control and left the years of oil shocks and foreign oil control behind.

With the world’s largest reserve and a thriving fracking industry, the US looks poised to be the world leader in production and energy security for years to come.