A new report from Fitch Ratings is another point in a growing line of evidence that U.S. shale development is aiding in moderating global oil prices and shielding the United States from price shocks.

According to the report, production from American shale plays – including the Eagle Ford, the Bakken, and the Permian Basin – has increased total U.S. oil output by three million barrels per day (mmbd) since 2008, roughly equal to three percent of total world consumption.  The benefits of this production have been felt here at home from new job creation to more tax dollars flowing into state coffers. Yet what is becoming increasingly clear is domestic energy output is having an impact far beyond America’s shores.

“Many of the benefits of the U.S. oil and gas fracking revolution accrue only to the U.S.: increased employment and GDP, a lower trade deficit, a booming petrochemical industry, manufacturing benefits across a range of other energy-intensive industries, cheaper and cleaner electricity.

“These are the benefits of increased energy independence — more and cheaper domestic oil and gas. But all oil-consuming countries benefit from the stabilizing effect of increased U.S. output on world oil prices. This is the benefit of energy interdependence — the linkage of U.S. and world oil markets through reduced imports of crude and increased exports of products.” (emphasis added)

While the United States is, and will continue to remain, a part of the complex global energy market, the increase in U.S. production has provided clear benefits for American and international consumers alike. As a new report from the Center for New American Security explains, “internationally, new U.S. oil supplies have helped to cap the price spikes caused by severe global supply disruptions and to moderate oil prices for consumers.” 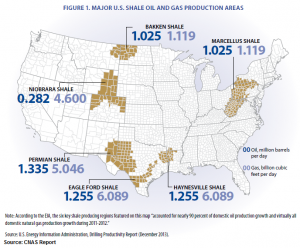 Meanwhile, North American oil production is slashing imports from OPEC and sending “shock waves” throughout global markets – a development that is providing tangible national security benefits. As the Council on Foreign Relations (CFR) highlighted in October 2013, “greater availability of domestic energy resources benefits the United States by reducing dependence on imported energy and diversifying the economy.”

Charles Ebinger from the Brookings Institution also notes how American oil and gas abundance “pose the opportunity for a manufacturing renaissance and a revitalization of the North American industrial base,” in addition to positive international implications. Ebinger continues:

“With the surplus of natural gas and crude oil beyond our domestic needs, we also have the opportunity to help alleviate the dependency of our major trading partners in Europe and Asia on more politically insecure regions of the world.”

From improving American security to shielding consumers from global price shocks, the development of shale is providing enormous benefits across the globe. Members of OPEC now have to look to American energy production — a “defining feature of tomorrow’s market” – as a dominant contributor to the world oil supply. Few people could have envisioned such a turnaround just a few short years ago.