Less than a year after predicting the United States would become a net energy exporter by 2022, the Energy Information Administration issued a new forecast this week: Thanks to record-shattering oil and natural gas production, the United States will actually achieve this status by next year.

EIA’s Annual Energy Outlook (AEO) found the United States will reverse its status as a net energy importer for the first time since 1953, based on every scenario the agency considered. From the AEO:

“The United States becomes a net energy exporter in 2020 and remains so throughout the projection period as a result of large increases in crude oil, natural gas, and natural gas plant liquids (NGPL) production coupled with slow growth in U.S. energy consumption.” 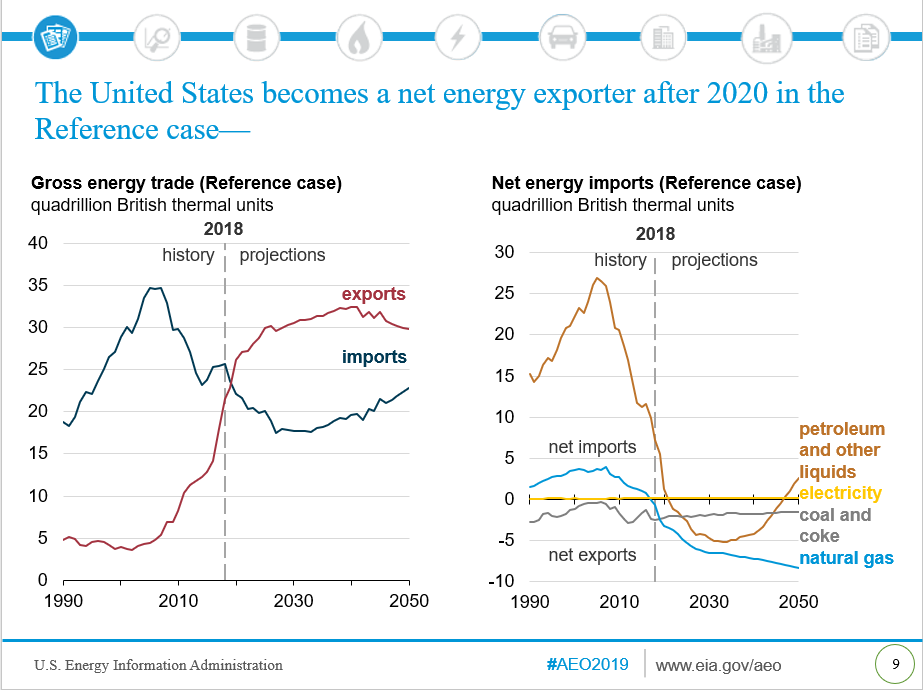 In addition, EIA predicts that despite a substantial increase in electricity generation, the use of natural gas and renewable sources will help emissions from that sector remain relatively flat.

“U.S. crude oil production continues to set annual records through 2027 and remains greater than 14.0 million barrels per day (b/d) through 2040.” 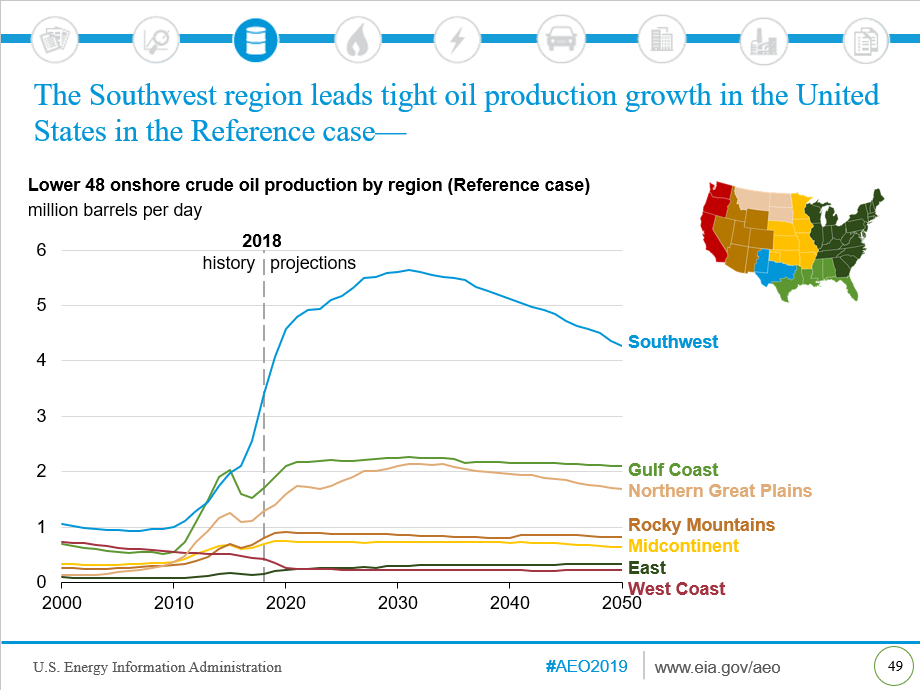 For perspective, crude oil production was 11.9 million b/d as of January 11, according to EIA. The forecast calls for a more than 17 percent increase in production over the next 8 years, which follows 112.5 percent production growth since January 2011.

In fact, a new report from research firm Rystad Energy predicts U.S. oil and hydrocarbon liquids production will surpass that of Saudi Arabia and Russia combined by 2025. 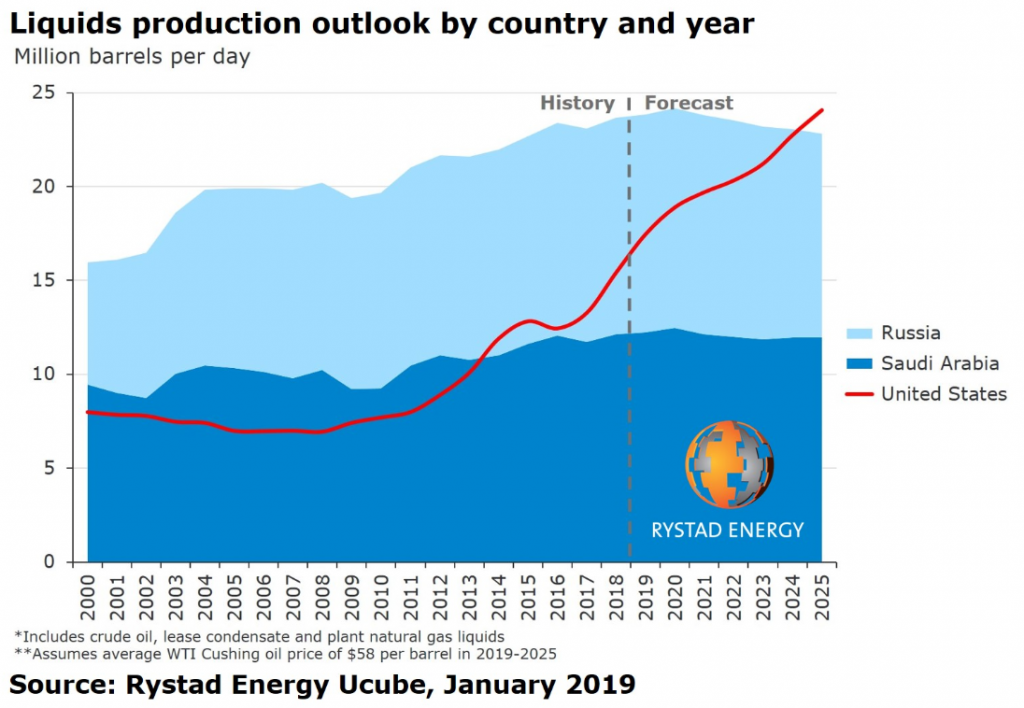 EIA forecasts that natural gas production liquids (NGPLs) will comprise one-third of total liquids growth, and alongside natural gas, will have the highest production growth of all fossil fuels through 2050. 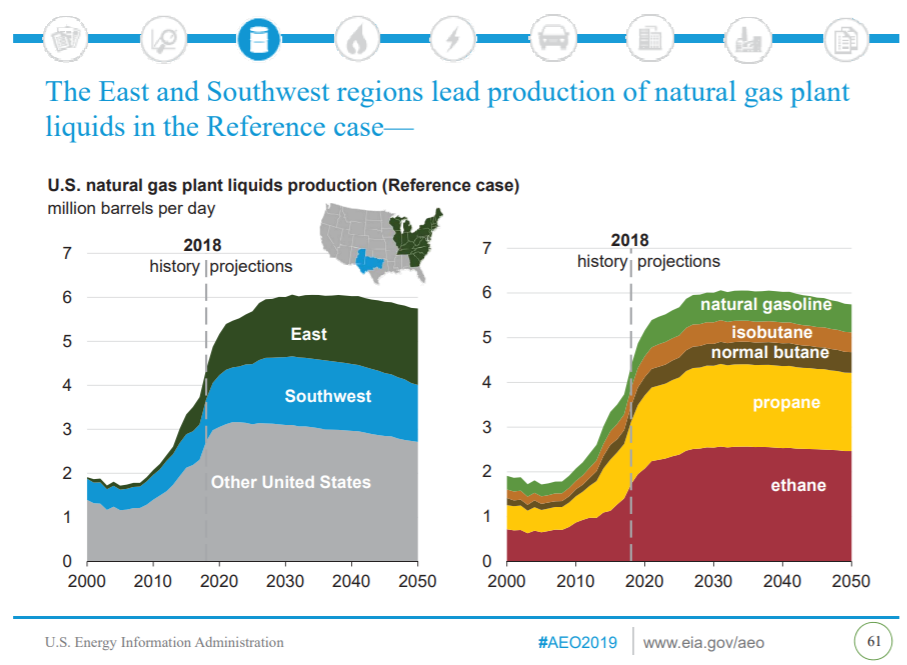 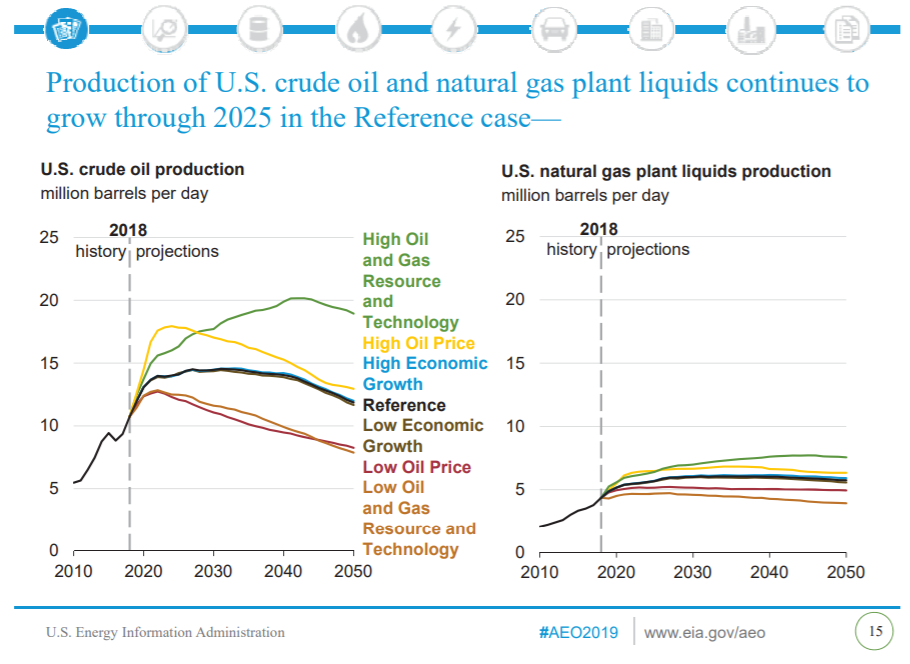 Natural gas is poised to  have the largest increase in production of all fossil fuels through 2050. From the report: 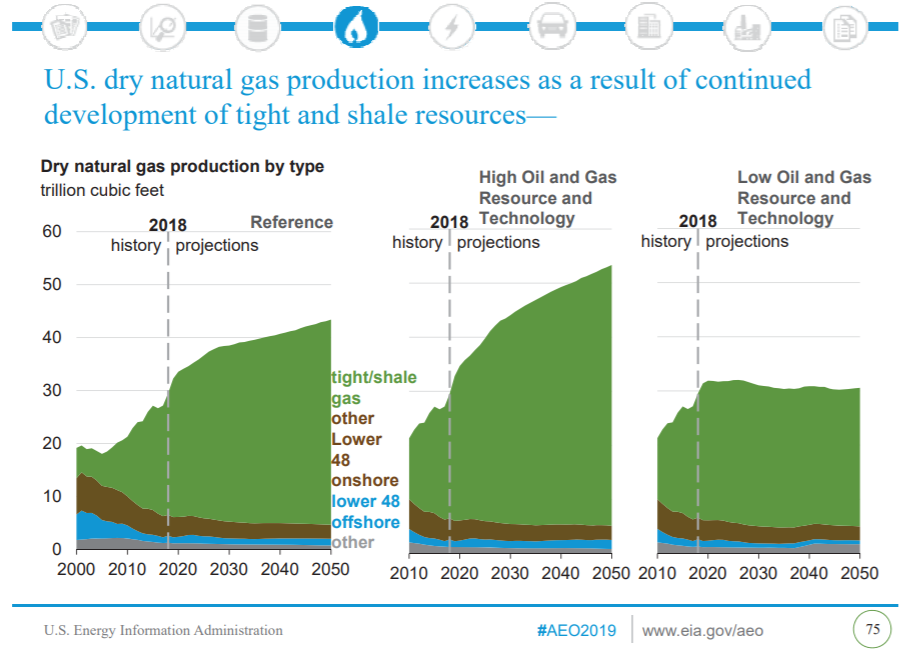 The Marcellus and Utica Shales in the East will continue to drive this production growth, along with strong contributions from the Eagle Ford and Haynesville plays in the Gulf Coast, according to EIA. 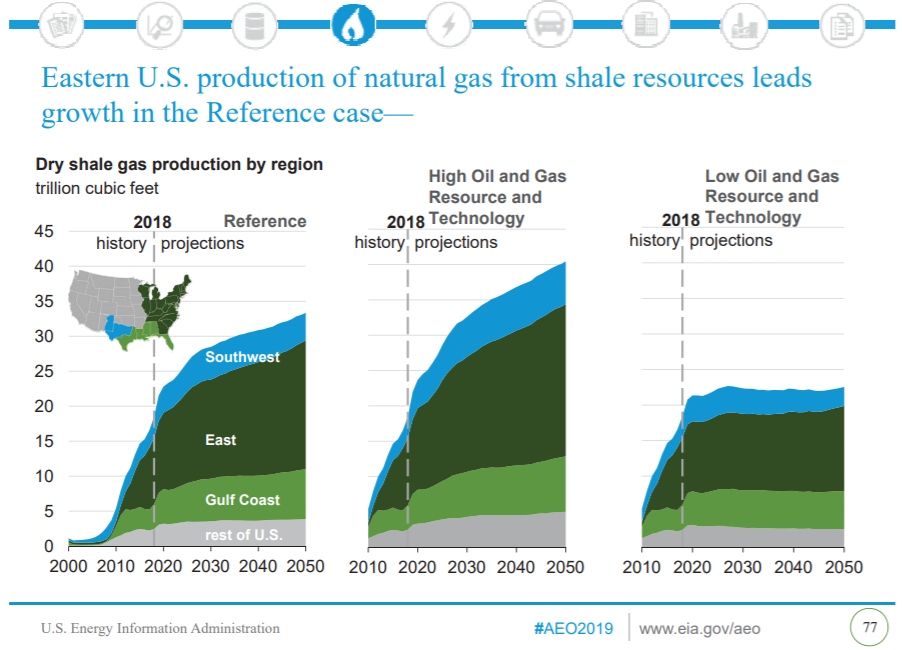 “Growth in drilling in the Southwest region, particularly in the Wolfcamp formation in the Permian basin, is the main driver for natural gas production growth from tight oil formations.” 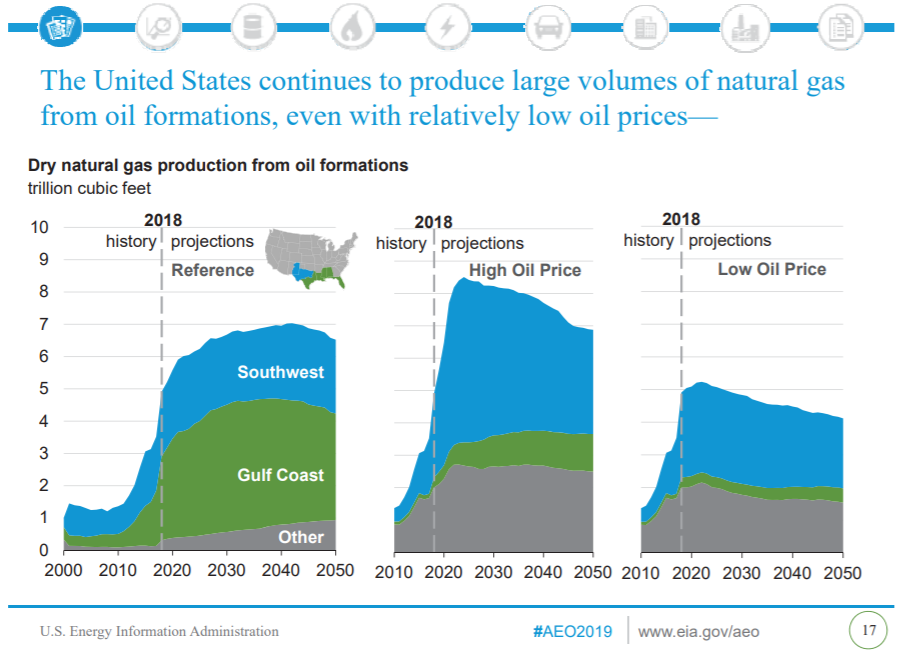 Natural gas consumption will be led by the industrial sector, which “becomes the largest consumer of natural gas starting in the early 2020s. This sector will expand the use of natural gas as feedstock in the chemical industries and as lease and plant fuel, for industrial heat and power, and for liquefied natural gas production.” Additionally:

After 2020, the growth of production will outpace that of consumption in most scenarios, the AEO found. This will lead “to a corresponding growth in U.S. exports of natural gas to global markets.” 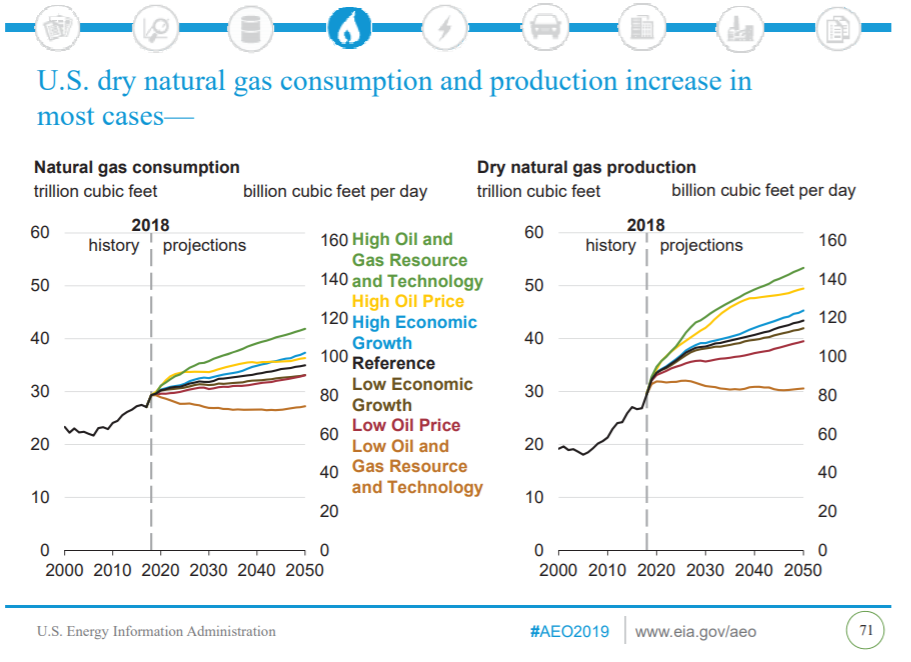 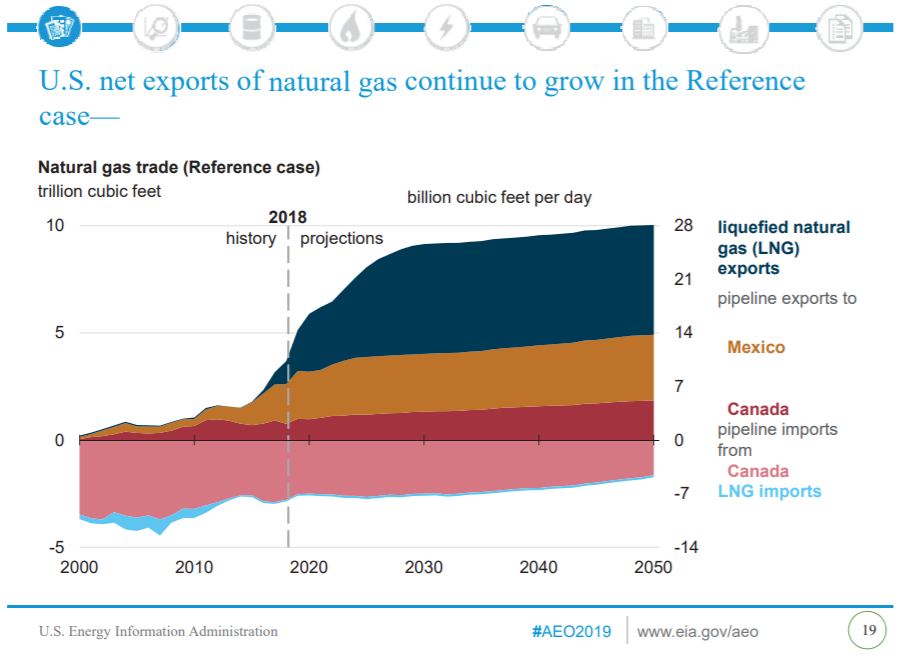 Low natural gas prices will also help drive “a notable shift” in electricity generation fuel sources, according to the AEO:

Notably, EIA explains, “the level of emissions remains relatively unchanged in the Reference case from 2018 to 2050, despite a 30% increase in generation during the projection period.” 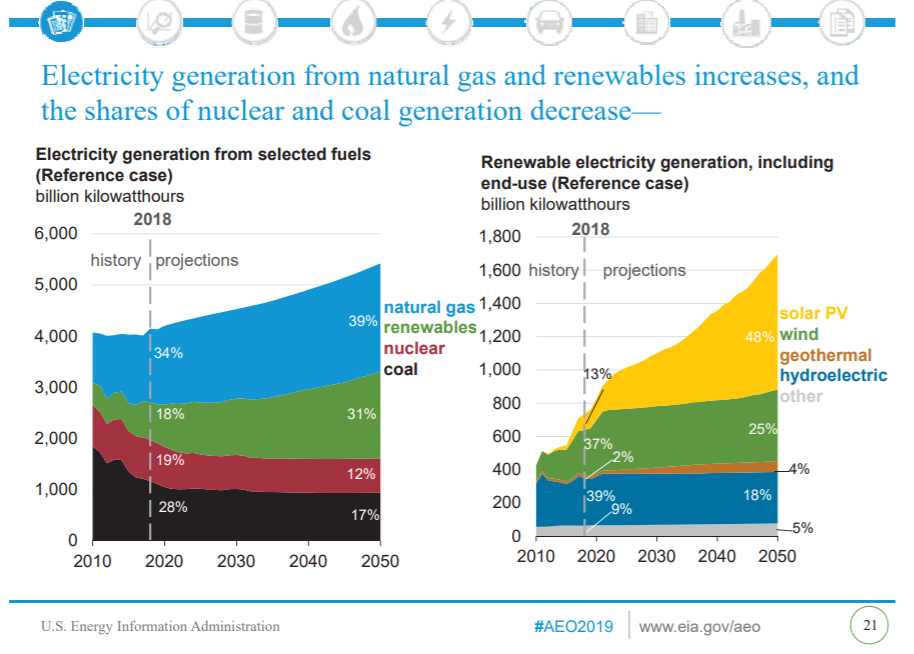 The 2019 Annual Energy Outlook forecasts the strengthening of U.S. energy security, as record oil and natural gas production continues to reduce American dependence on foreign energy. This abundance of U.S. energy will not only provide domestic benefits, but will enable the United States to have an important role in improving the world’s access to energy and decreasing global emissions. And we’re poised to do it more quickly than previously imagined.