It was one year ago that the University of Cincinnati released its data on the most comprehensive Utica Shale groundwater fracking study ever conducted in Ohio. The study found “no evidence for natural gas contamination” and was “disappointing” news to the anti-fracking community, which funded part of the study.  Despite the fact taxpayers also funded this study, the paper has yet to be published by a peer-reviewed scientific journal.

EID has been tracking this story for the past year, uncovering the study’s funding and calling question to the delay in publication. Recently, we asked the study’s lead researcher, Dr. Amy Townsend Small, to give us an update as to the status of UC’s publication efforts. She issued the following statement in response,

“I’m hopeful that the paper will be accepted for publication in 2017. It’s always been the goal of this and my other work, and we’ll keep working with the journals to try and make that happen. And, of course, we continue to publicize our results whenever the work is included in conferences.”

However, it was almost a year ago that Townsend Small stated in an email to the National Association of Royalty Owner’s (NARO) that UC is “currently working to prepare these data for publication in a peer-reviewed journal.” In other words, it’s been one year and results are still the same.

At the end of the day, it’s on the University of Cincinnati to circulate the unpublished manuscript among the academic community to find a scientific publication to accept its findings. Without doing so, the research cannot be used for National Environmental Policy Act (NEPA) reviews, such as the recent environmental assessment that was conducted for leasing in the Wayne National Forest.

While UC has stated it “did not fund the water sampling campaign” with taxpayer dollars, the study actually could not have been conducted without taxpayer-funded tools to determine its findings. According to UC’s own press release:

“Funding for the UC study was supported in coordination with …the Ohio Board of Regents… were also awarded a $400,000, 3-year grant from the National Science Foundation (EAR-1229114) for an isotope ratio mass spectrometer. The instrument measures the stable isotope composition of methane, which can indicate whether it is derived from biological activity or natural gas.” (emphasis added)

“Results from research projects using this instrumentation will be disseminated through student and faculty presentations at national and international scientific meetings, publications in peer-reviewed journals, and online data repositories.”

UC’s indefinite delay in securing scientific journal publication of a study that found no water contamination from hydraulic fracturing — despite scrutiny, media attention, and numerous calls from groups and elected officials to do so — is all the more interesting considering UC was able publish the results of its 2015 study that claimed fracking was causing significant air pollution in Carroll County. That study appeared in Environmental Science & Technology just three months after it was completed.

But that study was quietly retracted due to “errors” and “incorrect” calculations. In fact, the researchers’ “honest calculation errors” in the original study led to an exaggeration in the cancer risk from PAH emissions in Carroll County by an astounding 7,250 times what the corrected study shows they actually are. 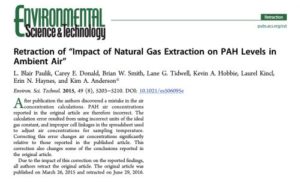 Both studies were first announced at events hosted by Carroll County Concerned Citizens (CCCC), a well-known anti-fracking group that has since dismantled. The same professor that presented the air quality study results to CCCC, study co-lead author Dr. Erin Hayes, has also participated in other anti-fracking events.

Additionally, UC and others have announced similar efforts to attract grant funding for studies all across the Utica Shale region. Most recently fringe environmental activists led by Columbus environmental lobbyists, the Ohio Environmental Council, announced their plans to chase taxpayer dollars toward a solution in search of a problem.

Ohioans deserve a full explanation as to why the two taxpayer-funded studies led by UC received two very different levels of attention in the scientific community. It’s been one year since UC announced the findings on its groundwater study (which cost taxpayers $400,000, by the way) and yet Ohioans are still waiting for the study to be peer-reviewed and published. By any measure, this example is of serious concern and the Ohio UC case study should pose a serious question to a larger problem that may exist with federal and state tax dollars being used to support academic research to drive a particular bias.

Is the academic community using taxpayer dollars to promote an agenda? Are studies that show that fracking is not causing widespread systemic groundwater contamination being muted by the refusal of scientific publications to review and publish data that does not fit their narrative?