Earlier this week, EID published the testimony of a landowner who attended a meeting with the U.S. Forest Service regarding oil and gas leasing in Ohio’s Wayne National Forest, which Keep-It-In-The-Ground activists disrupted and tried to shut down.  While that meeting was underway in Ohio, fringe Keep-It-In-The-Ground extremists stormed a union construction site for the Dakota Access pipeline, intimidating men and women who were just trying to do their jobs. Why? Because the Keep-It-In-The-Ground movement is driven by “self-righteous” anti-fracking activists who are “not beyond performing acts of public disobedience to attain their goals.”

In Ohio and across the country, unions and landowners are speaking out. Just today, AFL-CIO President Richard Trumka said,

“We believe that community involvement in decisions about constructing and locating pipelines is important and necessary, particularly in sensitive situations like those involving places of significance to Native Americans. However, once these processes have been completed, it is fundamentally unfair to hold union members’ livelihoods and their families’ financial security hostage to endless delay. The Dakota Access Pipeline is providing over 4,500 high-quality, family supporting jobs.

Furthermore, trying to make climate policy by attacking individual construction projects is neither effective nor fair to the workers involved.  The AFL-CIO calls on the Obama Administration to allow construction of the Dakota Access Pipeline to continue.” (emphasis added)

The Laborers International Union of North America (LUNA), representing half a million men and women across the country, recently explained that “Extremists Target Dakota Access Pipeline Construction.” According to their website,

“It is deeply troubling that LIUNA members and fellow tradesmen and women, who are simply trying to do their jobs and put food on the table for their families, are facing intimidation and dangerous confrontations as protests against the Dakota Access Pipeline have intensified. Over the weekend, hundreds of protesters, illegally trespassing on private land, stormed an active construction site – risking their own injury as well as that of construction workers on site.” 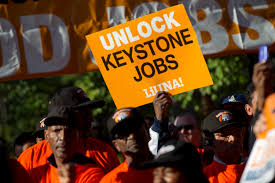 LiUNA, which was a key supporter of the Keystone XL pipeline is pushing back against Keep-It-In-The-Ground in the Dakota Access Pipeline fight

This most recent statement by the AFL-CIO is not surprising as more than 50 unions have recently spoke out against Keep-It-In-The-Ground crusader and funder California billionaire Tom Steyer and his all-out campaign against oil and natural gas.  In fact, the LIUNA president Terry O’Sullivan stated in a letter,

“Tom Steyer and his allies oppose an all-of-the-above energy policy that not only creates good union jobs, but offers to keep the lights on and meet our nation’s energy needs even as we transition to a cleaner, more sustainable future. His vision of leaving oil, natural gas, and other fossil fuels in the ground kills jobs, drives up energy costs, and threatens to strangle our economy. As a hedge-fund billionaire, he may not feel the pain of such self-righteous, patronizing and damaging policies, but our members, and all American families, do. ‘Leave it in the Ground’ is not a viable energy policy; it’s political bulls*&#.”

Of course, communities are getting pretty tired of this disastrous campaign. Whether it’s Keep-It-In-The-Ground or “rights of nature,” or the so-called Community Bill of Rights, Ohio citizens are fighting back. As one Ohio outlet reported about an anti-fracking ballot measure:

“self-absorbed allies in the anti-fracking movement keep up this exercise in futility, the more they feel the wrath of the people of Youngstown.”

In the Buckeye State, the building and construction trades unions are already hard at work, thanks to billions of dollars in pipeline and natural gas plants. In fact, all of the construction jobs associated with the $4 billion invested in natural gas fired power plants, have gone to local union workers.  Many pipelines are currently under construction with millions of workhours slated to come to Ohio soon.

As USA Today reported in 2014 (and is still true two years later), “Fracking foes cringe as unions back drilling boom.”  These anti-fracking groups continue to highlight that they are in fact outliers, which is why Republicans, Democrats, unions, landowners, and the general public are speaking out.