Researchers from the University of North Texas recently gave a presentation on their preliminary analysis of ozone conditions in north Texas, in which they drew a link between Barnett Shale development and higher ozone levels. But a closer examination of the data raises questions about that link, including evidence that even appears to contradict the researchers’ claims.

The presentation was based on data collected from Texas Commission on Environmental Quality (TCEQ) monitoring sites, stationed in 11 counties, and collected over a 14-year time frame.  Notably, there is no peer reviewed study to accompany the presentation, because the research has not been officially published. However, the raw data did show an overall reduction in ozone across the region.

The authors divided the region into monitoring sites found within the “Fracking Region” (FR) and “Non-Fracking Region” (NFR), and then split the 14-year time span into two groups from the years 2000-2006 and 2007-2013. 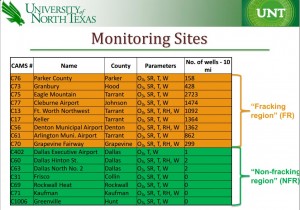 From 2007 to 2013, the average number of wells developed per year in the FR zones more than doubled — from 713 to 1,682. Yet, according to the raw data, both regions showed an average reduction of 10 percent in ozone from 2000 to 2013 (Slide 5). So, with nearly 1,000 more wells per year being drilled in the region, the ozone levels still decreased – and at virtually the same average rate as those in the NFR zone.

The presenters also looked at the raw data to identify days where the ozone levels reached levels greater than 75 parts per billion, the current federal standard. As found in similar studies regarding temperature and ozone, most of these days occurred in the summer months from May until September (the National Oceanic and Atmospheric Association [NOAA] even refers to this as “ozone season”). Despite some exceedances, the raw data again showed major reductions in the number of days this occurred over the past 13 years.

Airports and Ozone: A Missed Factor

Looking at the monitor names and locations (see chart above), there are three locations identified as airport monitors in the FR zone, compared with only one in the NFR zone. A fourth location in the FR zone is identified as being in the county of Grapevine. There is no Grapevine County, but the city of Grapevine (which we assume the authors meant; it’s in Tarrant County) includes Dallas-Fort Worth airport – the fourth busiest airport in the United States and the eighth busiest worldwide.

Why is that important? Just this past January, the Federal Aviation Administration (FAA) issued a press release highlighting a national program intended to help airports reduce overall emissions, with ozone reductions being a key goal. The reason, as you may expect, is because airports – with all of the air traffic and other industrial activity that they facilitate – are major sources of emissions that cause or contribute to ozone. The Texas Commission on Environmental Quality calls aircrafts a “significant source of NOx, VOC, and CO emissions,” which contribute to ozone.

In other words, even had there been zero Barnett Shale wells developed in the region, one could reasonably expect to see high ozone readings in the researcher-determined “fracking zone.”

The researchers told the Fort Worth Star-Telegram that, between the two zones, the “only difference is the shale play, or there are sources we are not accounting for.” Clearly, the size and number of airports are a major potential source of ozone in the delineated FR zone – but the presentation includes zero discussion of them.

Much Ado about the Weather

One of the more shocking graphs in the presentation is on slide 25, which shows a dramatic spike in wintertime ozone in the “fracking region” in 2010 and 2011, while the “non-fracking region” shows only a moderate increase. This was after the researchers performed a “meteorological adjustment,” which was supposed to adjust for temperature and other weather-related factors. Earlier in the presentation (slide 13), the data showed comparable ozone levels between the two regions, with the non-fracking region actually registering higher levels in some of the winter months.

But in the “meteorologically adjusted” portion, suddenly the FR zone has ozone levels that appear to be more than five times larger than the NFR zone. Unfortunately, the presentation itself contains no explanation for this, other than a description of the specific computer models used.

Besides computer inputs, what else could account for higher wintertime ozone in the “fracking region”? In short, winter itself.

The FR zone contains at least portions of five counties: Parker, Hood, Tarrant, Johnson, and Denton. The overall population density of that region is roughly 736 people per square mile. The NFR zone – Dallas, Collin, Rockwall, Kaufman, and Hunt Counties – has a density of roughly 988 people per square mile. Thus, the NFR zone is about 34 percent more densely populated than the FR zone.

That’s important because wintertime ozone (as we’ve explained before) is heavily influenced by snow cover, which would be more pronounced in less densely populated areas (think farms, fields, large yards, and other open areas) than in densely populated cities, where streets and other infrastructure are cleared of snow.

North Texas is certainly not known for its blizzards. But in the winters of 2010 and 2011 – the two years that the researchers identified the largest spike in wintertime ozone in the FR relative to the NFR — the Metroplex experienced record-setting cold. According to the National Weather Service, 2010 and 2011 yielded the second and fifth highest snow totals in the region’s history. Maps for both the 2009-2010 winter and the 2010-2011 winter show that counties in the FR zone also had greater snowfall than the NFR zone.

Obviously, ozone accumulation is more complex than tracking whether or not snow fell in a given month or season. It’s also possible that the “meteorological adjustments” factored in snow cover and its significant influence in wintertime ozone. But the UNT researchers provide no discussion of this, even though snow accumulation is well known as a contributing cause of wintertime ozone. In fact, the word “snow” doesn’t even appear in the presentation.

It’s difficult to assess how any of the above-mentioned factors may or may not be significant limitations, because the research itself has neither been peer-reviewed nor published. That also means when the research was distributed to the press, no one could provide any meaningful critique of the methods or validate the quality of the data for those stories.

Regardless, the fact that an increase in Barnett Shale development corresponded with a reduction in ozone levels is certainly “good news,” as the researchers even admitted. It also mirrors what the TCEQ concluded just a few years ago about the Barnett Shale.

This latest research is interesting, and contains some interesting conclusions. But like another recent study linking Barnett Shale development and ozone, it is the computer model inputs (and, in some cases, the lack of inputs) that will ultimately determine its validity.