Untangling the Vote to Ban Drilling in Denton

Sold as a means of protecting homeowners, anti-fracking groups were quick to cheer passage of an anti-drilling measure in Denton. But the neighborhoods at the center of the controversy rejected the ban by a hefty margin.

Earlier this week, after voters in Denton, Tex., passed a measure intended to ban drilling in the city limits, the vote was immediately framed in the media as a rebuke to oil and gas development in urban and suburban environments. The Wall Street Journal described hydraulic fracturing as “disrupting residential neighborhoods.” Coverage from other outlets was equally harsh. “As the shale boom encroaches on urban areas, residents in communities near drilling operations are growing more resentful of the heavy truck traffic, noise and pollution associated with the work,” read a story from Bloomberg News.

In Denton, the emphasis had been primarily on two neighborhoods: Vintage and the Meadows of Hickory Creek, both of which are located near the intersection of Vintage Boulevard and S. Bonnie Brae Street. Frack Free Denton referenced developments in those neighborhoods as its top reason to ban fracking in Denton. A story for the Dallas Business Journal earlier this year described events near Meadows as prompting the push for a ban:

“The crusade against fracking in Denton started when several Barnett Shale wells were drilled and fracked a few hundred feet away from homes in the Meadows of Hickory Creek neighborhood in January.”

Drilling opponents wasted no time declaring that passage of the ban validated concerns that began in those neighborhoods. “The nightmare that unfolded in the Meadows at Hickory Creek will not be repeated,” wrote University of North Texas philosophy professor Adam Briggle, vice president of Frack Free Denton, two days after the election.

But a review of the election results reveals an interesting fact: the precinct that includes Meadows rejected the ban by nearly a two-to-one margin, delivering the strongest rebuke of any precinct in Denton.

A city map shows that Meadows is in precinct 4003, southwest of the I-35 split. The official elections results page for Denton provides a precinct-by-precinct breakdown of all races and ballot measures, including the measure to ban hydraulic fracturing. According to the results, in precinct 4003, 952 votes were cast for the ban, but 1,794 votes were cast against it. Among all precincts in the city, 4003 also cast the most votes on the ban, for and against. 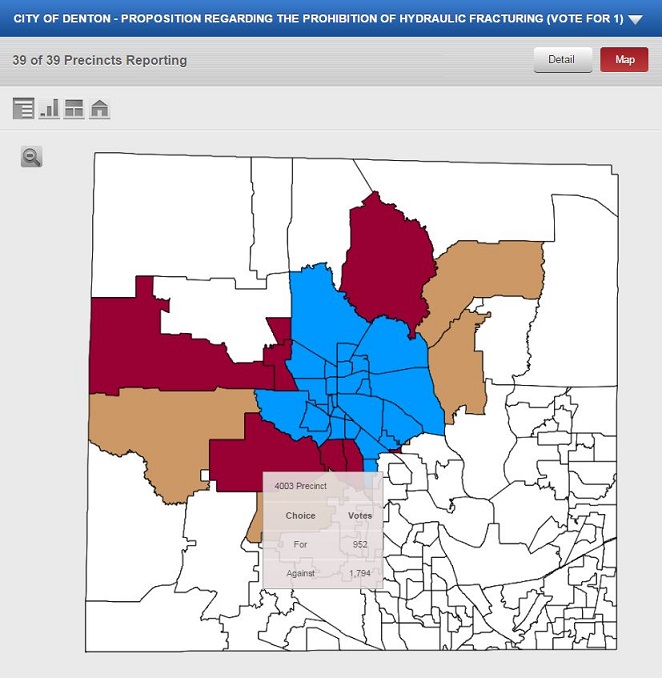 Denton precinct 4003, which includes the neighborhoods frequently referenced by drilling opponents, cast more votes against the measure to ban hydraulic fracturing than any other precinct. SOURCE: Denton County

As Denton Taxpayers for a Strong Economy observed:

The anti-drilling measure was sold as a referendum on whether oil and gas development is compatible with residential neighborhoods, and the Denton homeowners at the center of that discussion said “yes, it is.”

A few days before the vote on November 4th, an organizer for Earthworks – which had been the primary source of funding for the anti-drilling campaign – referenced “complaints from the Meadows of Hickory Creek and Vintage nieghborhoods [sic]” to promote the ban. Earthworks has said nothing in response to the fact that those neighborhoods voted against the anti-drilling measure.

Supporters of the ban were also quick to note that Denton County has a strong Republican base. As the Dallas Business Journal reported, city councilman Kevin Roden – a ban supporter who told Al Jazeera earlier this year that “drilling for natural gas is incompatible with neighborhoods” – played up the political angle:

Denton City Councilman Kevin Roden said voters in the city typically vote 70 percent conservative but that didn’t stop them from standing up to the oil and gas industry.

“That’s virtually unheard of,” Roden said. “That’s a pretty remarkable story of the people getting out and making the case. This didn’t break along party lines and I think the story is that the fracking issue is no longer a Republican/Democrat split issue.”

For example, Republican Greg Abbott won 65 percent of the vote throughout Denton County on his way to winning the governor’s race, according to the Denton County elections. Other Republicans also fared well.

When a heavy industrial activity is placed next to neighborhoods, “it doesn’t matter what end of the political spectrum you’re on. You’re going to be against it,” Roden said. (emphasis added)

But precinct data once again tell a different story. The strongest support for the ban came from precincts near the two college campuses – University of North Texas and Texas Woman’s University – which deviated considerably from how the rest of Denton County voted in the election.

For example, one of the largest margins of support for the ban came from precinct 4007, which includes a portion of the UNT campus. In that precinct, 1,452 people cast votes for the ban, while only 347 opposed it. Precinct 4007 also included twice as many people who voted the straight Democratic ticket than those who voted straight Republican.

Precinct 4009, which includes the TWU campus, cast twice as many votes for the ban than against it. The precinct also supported Democrats Alameel and Davis over Republicans Cornyn and Abbott, respectively.

The vote against drilling in Denton shows the need for more educational efforts in communities, and more proactive outreach with local residents to make sure their concerns are addressed. We know from many other cities across the country, including others within the Metroplex, that responsible development can perfectly complement and enhance local economies with high paying jobs and new tax revenue.

Indeed, as so many permanent homeowners in Denton suggested this week, there’s nothing inherently unsafe about oil and gas development – but there are always opportunities to convey that fact better.