The United States Geological Survey (USGS) this week announced the largest ever assessment of undiscovered, technically recoverable oil and gas resources in the United States, found in the Midland Basin of the Wolfcamp Shale area in the Permian Basin.

The USGS reports the Permian Basin may have an estimated 20 billion barrels of continuous oil, 16 trillion cubic feet of associated natural gas and 1.6 billion barrels of natural gas liquids in the region. The amount of projected continuous oil in the Wolfcamp Shale is 19 times larger than in the Eagle Ford Shale and three times larger than in the Three Forks region of the Bakken Shale. 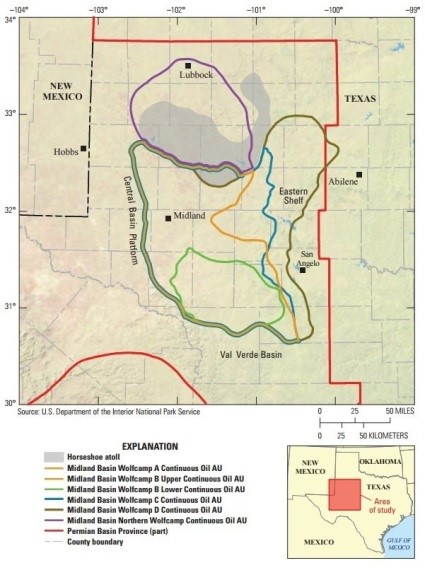 “The fact that this is the largest assessment of continuous oil we have ever done just goes to show that, even in areas that have produced billions of barrels of oil, there is still the potential to find billions more. Changes in technology and industry practices can have significant effects on what resources are technically recoverable, and that’s why we continue to perform resource assessments throughout the United States and the world.”

With a reported 218 active oil rigs, the Permian Basin already has nearly as many rigs currently in operation as the rest of the United States combined. A recent EIA drilling productivity report identifies the Permian Basin as the nation’s most prolific oil-producing shale play. Given its potential, production will undoubtedly increase as companies race to acquire land and holdings in the area.

According to Bloomberg, the estimated continuous oil in the region is worth $900 billion at current prices. This makes the Permian Basin second only to Saudi Arabia’s Ghawar field in potential value.

The International Energy Agency (IEA) recently released a market report noting that if the Organization of Petroleum Exporting Countries (OPEC) were to cut production, it could spark “relentless growth” in U.S. oil production. OPEC agreed on a 2 percent cut at a Sept. 28 meeting in Algiers and will finalize its future output plans in Vienna on Nov. 30.

OPEC opted not to cut output and pump full blast in 2014 in hopes of bankrupting the U.S. shale oil industry, but as Forbes reported, that strategy has backfired,

“When Saudis launched their global oil market share war in 2014, the assumption was that as soon as prices fell below $75 a barrel America’s frackers would dry up and blow away. Sure, there have been 100 bankruptcies. And U.S. output has fallen from 9.6 million bpd to 8.2 million. Yet intrepid oil companies have been busy honing techniques, cutting costs, and finding cheaper oil in the U.S. than anyone thought possible.”

Abundant resources and technological advances mean the Permian Basin is set to be a dominant global player. The Permian Basin is coveted as being one of the few onshore plays that continues to thrive even in a low commodity price environment. And with this new finding, West Texas shale will only continue to be a bright spot.