The United States Geological Survey (USGS) has just released its second-ever report forecasting both natural and induced seismicity potential throughout the United States. Notably, the report finds a 50 percent reduction in the number of Americans living in an area with a significant risk (1-12 percent) of experiencing a damaging manmade earthquake in 2017, down to 3.5 million compared to its 2016 forecast of seven million.

One of the most notable aspects of the report is the dramatic decline in induced seismic activity in Oklahoma: “In particular, in Oklahoma during the last six months of 2016, the rates were significantly lower than the rates observed during the previous two years.”

That’s not the only good news. The report goes on to explain that there were no felt earthquakes in North Texas in 2016. As USGS National Seismic Hazard Mapping Project chief Mark Peterson told Buzzfeed about this new data,

This progress is the direct result of continued collaborative efforts between regulators, industry and the scientific community that have led to a better understanding of induced seismicity — and subsequent effective mitigation measures that have cut the induced seismicity hazard in half. But not surprisingly, media outlets such as Buzzfeed and The Los Angeles Times have produced headlines aimed at stoking fears and downplaying this progress, which notably have been most apparent in areas USGS has identified being of greatest concern.

Notably, Oklahoma regulators have implemented measures that have either shut in or reduced volumes of injection in roughly 700 disposal wells reducing wastewater injection volumes 40 percent from 2014 levels.

The USGS report acknowledges that this was likely a contributing factor to Oklahoma seeing a 31 percent reduction of magnitude 3.0 or greater earthquakes from 2015 to 2016.

“The 2017 forecast decreased compared to last year because fewer felt earthquakes occurred in 2016 than in 2015. This may be due to a decrease in wastewater injection resulting from regulatory actions or from a decrease in unconventional oil and gas production due to lower prices.”

Indeed, Oklahoma has seen particularly dramatic declines in earthquake activity in recent months. Oklahoma Geological Survey and USGS data posted daily on www.tulsaworld.com show that rates of M-2.8 or greater earthquakes decreased 88 percent in the first two months of 2017  when compared to January and February 2016 (302 to 36) and that M-2.8 or greater quakes were down 91 percent this February when compared to the peak month of June 2015.

Kansas, which has taken similar proactive regulatory measures, had a 65 percent drop in magnitude 3.0 or higher earthquakes in 2016, going from 60 to 21. All told, Oklahoma and Kansas — the undeniable focal point of induced seismicity in the U.S. — saw a collective reduction in felt earthquakes of 33 percent in 2016.

In addition to the progress that has been made in Oklahoma and Kansas — USGS’s two most prominent areas of concern — USGS notes that earthquakes in the three other focus areas its highlighted in its 2016 report were lower than it forecasted in 2016, leading to USGS decreasing these regions’ hazard level,

“We define five focus areas where clustered earthquakes occurred in 2016: Oklahoma–Kansas, the Raton basin (Colorado/New Mexico border), north Texas (greater Dallas/FortWorth area), north Arkansas, and the NMSZ (Fig. 2). All of these areas except the NMSZ have experienced induced earthquake activity. Earthquake rates and estimated hazard have decreased in the five focus areas compared with the 2016 model and forecast.” 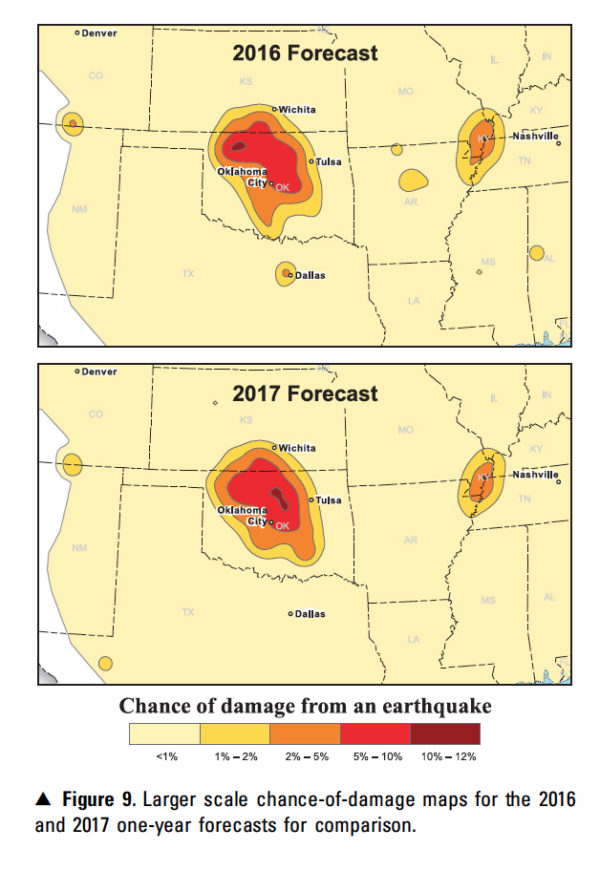 As the report’s press release notes, there were no felt seismic events in Arkansas and North Texas in 2016, leading to those areas being removed from the 2017 forecast map above.

“In north Texas and north Arkansas, however, where the researchers expected damaging induced earthquakes, there were no earthquakes in 2016 larger than magnitude 2.7. Petersen said the USGS team will be working with researchers in north Texas to find out whether there were any changes in injection practices in the area in the past year.”

Not only are incidences of induced seismicity declining, as EID has noted before, induced seismicity is very rare. In fact, even taking into account the roughly 700 injection wells subject to restrictions in Oklahoma, induced earthquakes can be linked to less than two percent of the 40,000 wastewater disposal wells nationwide.

And as expert after expert has noted before, an overwhelming majority of induced seismicity has been linked to saltwater disposal from day-to-day production — not the hydraulic fracturing process.

Industry continues to take the issue of induced seismicity very seriously, investing more than $50 million to reduce earthquake risks since March 2015. Companies have also helped secure funds for additional seismic monitoring stations and shared proprietary data with scientists and regulators, including information on previously unmapped faults. Industry has also collaborated with Stanford University on software that will help producers avoid potentially troublesome faults when drilling injection wells in the future.

Despite the alarmist headlines accompanying coverage of this USGS report, understanding of induced seismicity is improving every day, as are effective mitigation measures, proving once again that the issue is a manageable one.