When it comes to domestically produced oil and natural gas, political and geographic differences are being set aside. Bipartisan elected officials at all levels of government have agreed that growing the shale industry is vital and necessary for economic development. This was especially apparent yesterday when the governors of Ohio, Pennsylvania and West Virginia stood together with bipartisan members of Congress to support shale at two important simultaneous events in the region. These events even resulted in the three states signing an agreement to coordinate efforts to capitalize on Utica and Marcellus Shale development in the Appalachian Basin. 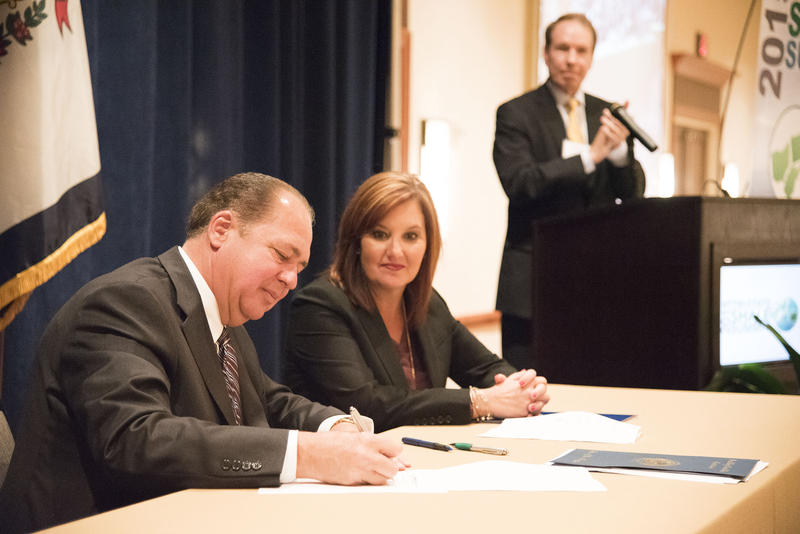 The Tri-State Shale Summit in Morgantown, W.V. and the third annual Utica Shale Summit in Canton, Ohio both focused on the next phase of Utica shale development: infrastructure, pipelines, cracker plants, manufacturing, and natural gas fired power plants. The impacts of the record breaking Utica and Marcellus Shale production in the region has led to more jobs, money, and products to be made in the United States. The two summits highlighted the Appalachian region’s long history of manufacturing, and made a compelling case for the geology of the play aligning with the geography of the Buckeye State that has reinvigorated what was once considered a dying Rust Belt to what is once again the backbone of America.

Congressman Bob Gibbs (R), Congressman Tim Ryan (D), and Congressman Jim Rennacci (R) were on hand for the Utica Shale Summit, and each expressed their staunch support of domestically produced oil and natural gas. Congressman Ryan best summed up the attitudes within the three states when he said,

“We’re not standing on a natural resource, we’re standing on jobs. These are opportunities for all those steel workers and auto workers who lost jobs over generations to have the opportunity to figure out how to go to work. We don’t get these opportunities very often.” (emphasis added)

After all, together West Virginia, Pennsylvania, and Ohio, represent 85 percent of U.S. natural gas production since January 2012. This information combined with the history of the region makes a compelling story for a manufacturing renaissance. The Ohio River is home to the bulk of the Industrial Revolution and has both the infrastructure necessary and the workforce to support cheap, domestically produced feedstock that is used to fuel manufacturing facilities. Southwestern Pennsylvania was once the steel capital of the world, and thanks to shale, is seeing a revitalization in the region. As Mario Langhi, President and CEO of U.S. Steel Corporation, said during President Obama’s visit to the region last year,

“Steel made at our Mon Valley area locations by our more than 3,000 employees is transformed into objects which are essential to modern society. Items like cars and trucks, household appliances, industrial equipment, parts for jewelry, watches, computers, and robotics. Every steel manufacturing job creates seven jobs in the U.S. economy.” (emphasis added)

The Utica Summit focused on how shale gas is reshaping global industries, and particularly the chemical industry, as shale gas components account for feedstock to support 98 percent of manufacturing products.   Tom Gellrich, an ethane market analyst discussed how the United States can produce ethylene more than two times cheaper than China, similar to President Obama’s speech at U.S. Steel last year where he said,

“Business leaders are starting to realize that China is no longer the best place to invest and create jobs, America is.”

And not just America, but Appalachia. Both ethylene and polyethylene which can be extracted during shale development provide the feedstock to the plastics industry. Now, thanks to shale development, we can make plastic cheaper in the United States than in countries like China. This news is consistent, with other reports which have supported shale driven “Made In America” manufacturing opportunities. For instance, a Fortune article recently stated:

“‘Made in the U.S.A.’ is becoming more affordable. The reason? Fracking.” (emphasis added)

In Ohio, that’s especially important given the fact that Ohio is commonly known as the Nation’s Industrial Capital, dating to its roots in the Rust Belt. Today, the “Rust Belt” is represented by Congressman Tim Ryan, who explained how the oil and natural gas industry is starting to bring the region back:

“Growing up and watching the factories close and watching people lose their jobs, and watching it ripple throughout the community… the whole thing that we have seen in Northeast Ohio for the last 20-30 years, we are still trying to recover from some of that…so when we all started to learn about the shale play, which was not necessarily in our lexicon a few years back, and started to really understand what was happening with Utica and Marcellus Shale…I was so excited about what the possibilities were, because we haven’t seen this in so long… We got a break, we got an opportunity.  We have a competitive advantage. We should be aggressively pursuing global manufacturing to come here. We’ve got the location, we’ve got the workforce, and we got our friends in the building trades who are ready-set-go. We have the culture of manufacturing, we got the location, two-thirds of North America is within 500 miles of this area, and we have the Tier 1, Tier 2, and Tier 3 suppliers all the way down the lines. We have the research and development. We have got the job training… what direction do you want to go?  Things are happening around here. “ (emphasis added)

The Youngstown area is just one example of the story playing out throughout the Marcellus and Utica shale regions, which is why statewide leaders from West Virginia, Pennsylvania, and Ohio came together in an unprecedented way to pledge to work together to support shale development. The Tri-State Shale Summit included United States Senator Joe Manchin, West Virginia Governor Earl Ray Tomblin (D) and Ohio’s Lt. Gov. Mary Taylor (R). The first-ever tristate agreement is a pledge for the three states to work together to grow natural gas and support shale development by encouraging workforce development, marketing, infrastructure and research.

“The development of West Virginia’s natural gas industry, although still in its infancy, has the potential to be a game-changer not only in West Virginia, but for the tri-state region. As technology continues to pave the way for new opportunities and create good-paying jobs for hardworking West Virginians, we are also working to support new investors and downstream industry partners who want to locate and invest in our region and our state’s workforce.” (emphasis added)

“My response is, ‘Show me that it has done something wrong or a violation, and we … can repair that or fix that. The bottom line is that if the government and all of us aren’t willing to find the new technology that makes everything as safe as humanly possible and clean as humanly possible, then how can you berate the people that’s providing the energy we all depend on?”

But the region is benefiting from shale development in more ways than just the development process. Natural gas-fired power plants are in the works across the region as a result of more than 72 gigawatts (GW) of electricity that have, or will be, retiring nationwide. Ohio, Pennsylvania and West Virginia will be hit hard, as these retirements will have major impacts on the Pennsylvania-New Jersey-Maryland Interconnection (PJM). Natural gas fired power plants are now essential to power the grid.

Ohio has already learned that close to $5 billion will be spent on natural gas fired power plants, creating hundreds of jobs and powering millions of homes. In Pennsylvania, this process has already started with four projects in the works:

That’s why when you consider the geography and the geology of the Marcellus and Utica shale plays, it’s no wonder the three-state agreement calls the region, “an emerging world-class energy center”.

This week’s bipartisan announcements make it abundantly clear that Ohio, West Virginia, and Pennsylvania are “open for business” and ready to support the oil and natural gas industry’s development of the Appalachian Basin.