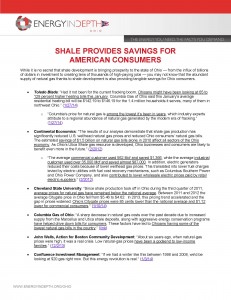 The Utica Shale has been a boon to the state of Ohio, providing jobs, energy, and new investment in the state. But the benefits of shale development go well beyond the well pads and new factories. In fact, one major benefit of this development goes all the way to your pocketbook in the form of lower energy bills.

Columbia Gas of Ohio has also used the increased supply of natural gas to reduce prices for its customers. As the Toledo Blade reports, the company stated “this January’s average residential heating bill will be $142.19 to $146.19 for the 1.4 million households it serves, many of them in northwest Ohio.”  But, as the article also notes, “had it not been for the current fracking boom, Ohioans might have been looking at 65 to 129 percent higher heating bills this January.

Check out EID’s new fact sheet – Shale Provides Savings for American Consumers — to learn more about how hydraulic fracturing and development of the Utica shale is helping consumers across the state.