The Canton Regional Chamber hosted a Utica Upstream conference at the Pro Football Hall of Fame this week with speakers that included regulators, industry executives, analysts, and academics. The key theme of the day was that, when it comes to Ohio’s Utica shale, optimism abounds.

Each speaker discussed the unique regional demand for shale that exists within a 500 mile radius of Ohio, West Virginia, and Pennsylvania. That fact, coupled with the staggering production of Utica and Marcellus oil and natural gas wells, has the region poised for ongoing success. Steve Irwin with the Ohio Department of Natural Resources (ODNR), summed it up best when he said,

“In 2015 we produced more gas (in Utica) than we consumed in 2015, and this is a great thing….certainly for home heating, electric generation, and various uses of natural gas. The rig count may be down, but we are seeing sustained or increasing production, we have surpassed JD Rockefeller.”

“We have curtailed some operations in northeast Ohio. But from a broad perspective we have not because the, the seismic monitors are not picking up any activity. We will continue our commitment to protecting the environment and increasing our inspections.” (emphasis added)

In addition to the seismic discussion, the increased need for more staff was a topic of conversation, as ODNR has sole and exclusive authority to regulate the oil and natural gas industry in Ohio. To highlight this point, representatives discussed the growth of inspectors they have hired across the state to meet the increased demands, as can be seen in the following image. 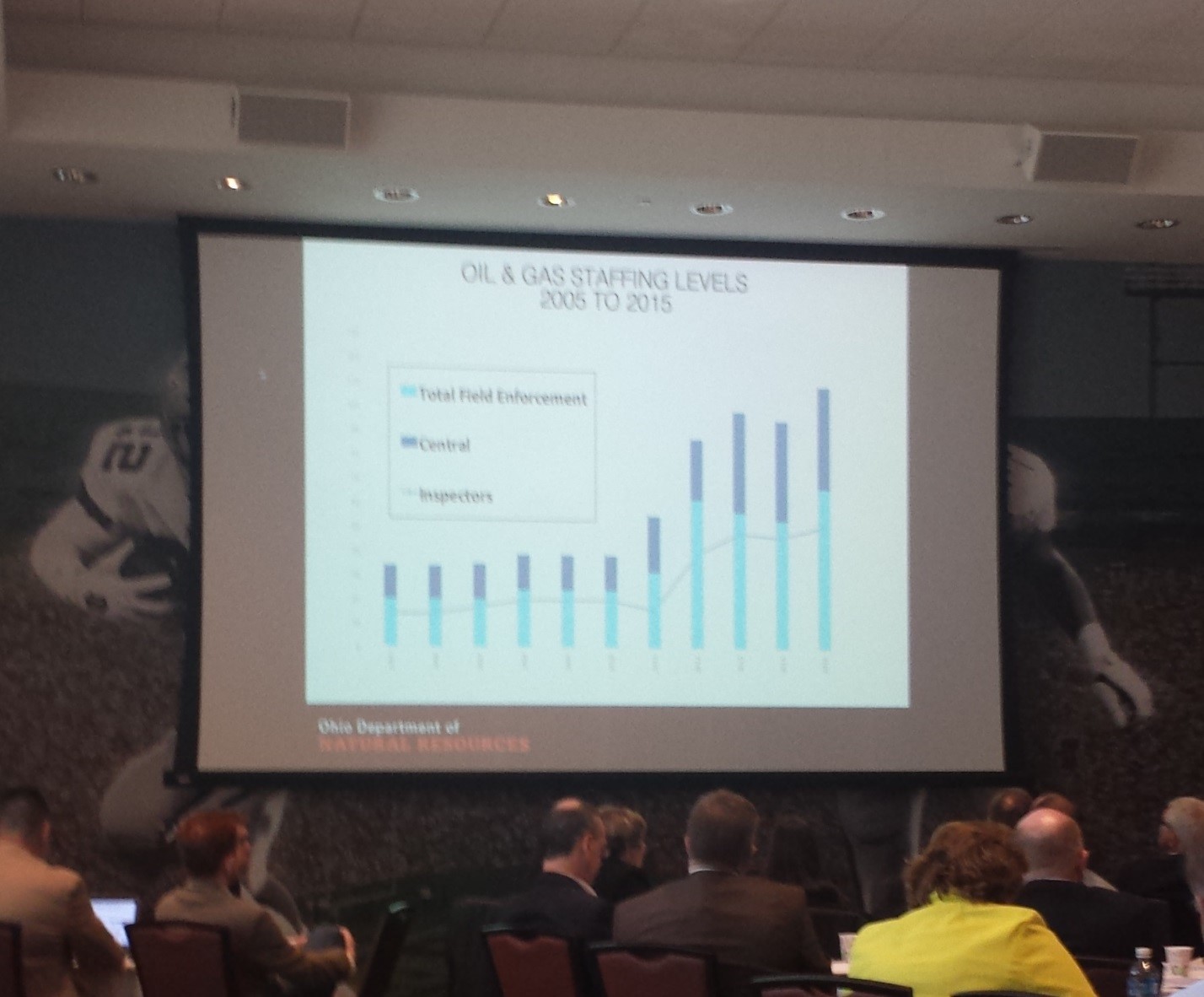 ODNR highlight the increase in staffing required to regulate the oil and natural gas industry.

Dr. Iryna Lendel of Cleveland State University’s Center for Economic Development and Energy Policy Center was another presenter who spoke on the current state of the industry in a presentation entitled. Mapping Regional Shale Development “A Bust or a Pause”. According to Dr. Lendel,

“I like to say we are in a pause. The pause is very favorable for Utica, in particular. Our takeaway infrastructure is just catching up.”

Dr. Lendel, who has led research efforts in the Appalachian Basin for the past several years, highlighted recent Cleveland State University studies which focused on midstream development, such as the need for pipelines and ethane crackers. She made it clear that it’s not a question of when the Utica shale will be developed to its greatest potential, but rather a question of when and how it will be developed, highlighting that the rebound of commodity prices will determine the areas in Ohio that will be developed and when.  There was also a heavy focus on the importance of ethane as it relates to the Appalachian Basin as Dr. Lendel explained,

“Which leads us to the 1,000 dollar question, where is a cracker? I just completed PTT Ohio, the as investors look very confident. They look forward to moving forward.”

A strong emphasis on regional demand was a key focus of the presentation, especially the tristate area of West Virginia, Pennsylvania, and Ohio. According to Lendel, what attracted regional crackers like PTT Global to the tristate, is the wealth of very skilled labor, proximity to consumer markets, aligned supply chain, and of course the low cost of natural gas and ethane.  The demand for the final product in our region will drive the demand for ethane, and therefore the demand for production of oil and gas in the Utica.

The Utica Upstream conference included two Utica shale operators who are working in the heart of the Utica shale, EdgeMarc Energy and Eclipse Resources. Conference attendees heard from Callum Streeter, EdgeMarc Energy chief operating officer. EdgeMarc Energy holds acreage in some of the most prolific natural gas areas of the state, in Monroe and Washington counties.  Mr. Streeter echoed other presenters of the day, as he discussed optimism with developing Ohio’s Utica shale. 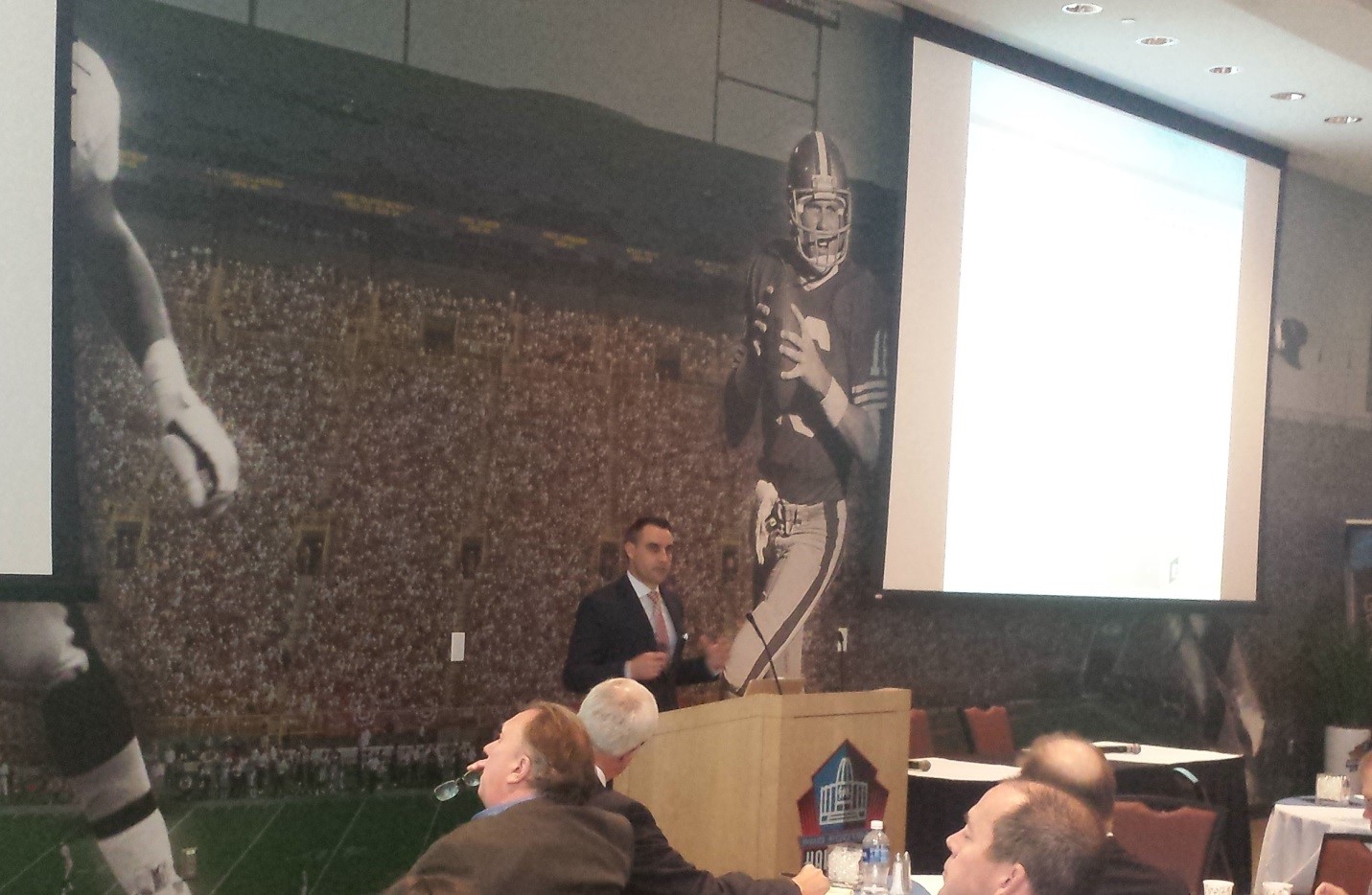 EdgeMarc Energy, chief operating officer offers a presentation at the Utica Upstream Conference at the Pro Football Hall of Fame.

“We have seen dramatic growth in this area. The Utica is still in its infancy.”

He also discussed how Utica operators are becoming much more efficient and have learned a lot from the Appalachian Basin, and how these best practices have led to the company reducing its costs to drill. Utica wells that once took at least 20 days to drill now only take nine days for companies like EdgeMarc Energy. These greater efficiencies are reducing the costs associated per lateral foot with drilling new wells.

Another key point that Mr. Streeter made was on the importance of working with the communities they operate in, as well as regulators. He said,

“At EdgeMarc Energy, we firmly believe that we do not have the RIGHT to operate in the communities we work in. We believe we have the PRIVILEGE to work there”

Speaking to the importance of working with regulators, he went on to say,

Eclipse Douglas Kris, vice president of investor relations for Eclipse Resources, echoed these points, sharing optimism over the development of Utica shale and the company’s recent award of the 2016 VZ Environmental Award for Excellence in Environmental Stewardship, which highlights their commitment to the environment:

“I think there is a light at the end of the tunnel. We employ over 100 people in Ohio. Recently, we won the Northeast Environmental Stewardship Award just last week. We are very committed to giving back to the community.”

Mr. Kris discussed the initial learning curve that Utica operators were faced with, and also discussed how Eclipse has made great strides in drilling wells faster with longer laterals to improve the overall economics of their wells. Community outreach and involvement was also a key component of their business, as well as a commitment to safety and environmental protections.

Both Utica producers stated that recycling of water is the future of shale drilling, particularly in the Appalachian basin.  Streeter explained that EdgeMarc Energy has committed to recycling as much water as they can through their operations and stated,

“One of the great things about this industry is that we are continuing to evolve and continue to use technology.”

“As much as industry opponents try to focus on the negative, there’s a lot of good that comes from innovation and that’s the good thing about our industry, we are continuing to innovate and find the best most environmental and cost effective ways to do things.”

One thing is certain, with over $8 billion in pipelines slated to come to Ohio, the potential of a new multibillion dollar ethane cracker and continued announcements of natural gas-fired power plants, it should come as no surprise that there is still a lot to be excited about in the Buckeye State.