Shale development is providing a number of benefits across the country, from new jobs to enhanced energy security — all while helping the United States reduce its greenhouse gas emissions and local air pollution.

State leaders and regulators have also touted the environmental benefits of natural gas. As the Pennsylvania Department of Environmental Protection (DEP) announced earlier this year: “Significantly, since 2008, when unconventional drilling across the state began quickly increasing, cumulative air contaminant emissions across the state have continued to decline.” According to the DEP, the reductions represent “between $14 billion and $37 billion of annual public health benefit.” 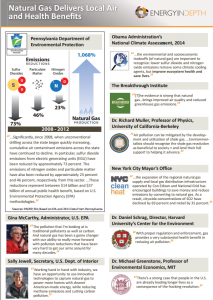 Governor John Hickenlooper (D-Colo.) has also discussed the “game-changing” role of natural gas in America’s ability to reduce its greenhouse gas and air pollution emissions, a statement experts from Harvard and MIT agree with. As Dr. Michael Greenstone, Professor of Environmental Economics at MIT, stated in 2013, “there’s a strong case that people in the U.S. are already leading longer lives as a consequence of the fracking revolution.”