Natural gas will continue to remain a key part of a Virginia’s energy mix to help ensure reliable and affordable power generation as the state pursues an aggressive buildout of renewables.

In a recently released report titled, “Achieving Clean Electricity Generation at Least Cost to Ratepayers by 2045,” the Virginia Department of Energy says the state is looking to meet its goal of achieving net zero emissions has outlined in the Virginia Clean Economy Act by relying on natural gas as a key fuel lower emissions and maintain a reliable power grid.

The report begins by noting the key role natural gas already played in the past two decades:

“Electricity sector emissions in Virginia have fallen by more than 25% since their high in the year 2000, even as generation rose by 33% during the same period. (Through 2019, this decrease in emissions was primarily due to increasing substitution of natural gas for coal.)”

The model used in the Virginia Department of Energy’s report calculates a mix of fuels and includes existing natural gas facilities through 2045. Natural gas will retain its 20 gigawatts of capacity for demand response, flexibility, and resilience by the end of the policy period modeled. 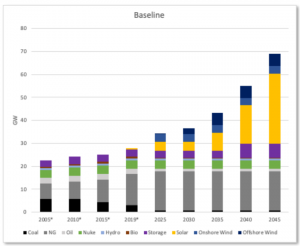 Virginia is in no rush to strand their natural gas assets voluntarily, and instead is primed to keep the natural gas infrastructure in place to retain the flexibility necessary for a 30-year transition. The report warns that writing off natural gas and other carbon-based energies would be imprudent and continues that:

“A moratorium [on whether the General Assembly should permanently repeal the ability to obtain a certificate of public convenience and necessity (CPCN) for any electric generating unit that emits carbon as a by-product of combusting fuel to generate electricity] is unlikely to accelerate the expansion of the clean energy industry in Virginia as carbon free sources will continue to be highly advantaged by the provisions of the VCEA and by market dynamics, including customer preference and falling costs of renewable energy production.” (emphasis added)

Natural gas retains its capacity under the model and will remain vital as renewable resources are projected to be less than 30 percent of electricity supply until about 2035 and only reach 50 percent around 2040.

Failing To Plan Is A Plan To Fail

Virginia’s model and accompanying decarbonization report includes natural gas a reliable energy sources while other states eschew it for the sake of net zero plans. Whereas these states are prepared to set arbitrary dates to phase out natural gas completely, Virginia’s plans for a diverse energy landscape that includes energy efficiency, solar, wind, storage, and smart grid investments along with existing natural gas and nuclear energy facilities. By deploying multiple resources, the state can reduce the likelihood of challenges brought by intermittent renewable resources or supply chain disruptions.

Not planning for inevitable shifts in the market or political landscape leaves states vulnerable to energy disruptions. Massachusetts suffered a setback in their climate goals last November when Maine voters rejected a referendum on a transmission line that would bring hydroelectric energy from Canada to the state. The Bay State and its residents’ have suffered from the abundance of keep it in the ground policies that have limited natural gas access, so any setback in their zero emission plans greatly impacts their electricity rates and energy reliability.

In modeling a 30-year plan, the report’s model has to exclude a number of eventualities, including commercial scale carbon capture and storage or synthetic fuels, hydrogen, and ammonia.

It will be interesting to see how the state’s decarbonization plans adapt to these budding resources that will continue to reduce emissions from natural gas plants. Many natural gas producers in the nearby Marcellus shale patch have begun work towards responsibly sourced natural gas. For example, EQT recently began work to certify a majority of its natural gas production, demonstrating excellence in environmental and social performance while satisfying market demands.

With the promise of renewable natural gas procurement from landfills in neighboring Maryland, and rising interest in carbon capture across the nation, these nascent technologies will certainly shift the state’s assessment.

Virginia starts from a position of relative strength thanks to its natural gas provide a stable base of support to increase renewables in the state’s energy mix:

“With 3.7 GW of nuclear baseload generation, 14 GW (or more) of natural gas capacity and substantial interstate transmission capacity, the electricity sector is in a position to absorb substantial quantities of solar and wind without generating concerns over resource reliability.”

Virginia is providing a strong example for other states looking to achieve net zero emission from their electricity sector on how to approach the issue with flexibility and ensuring reliability. Lowering emissions is a long process and as Virginia has made clear, natural gas plays a critical role.