A full 79 percent of voters responding to a recent survey support “streamlining or expediting the permitting process to improve, modernize, or construct critical energy infrastructure like renewables, pipelines, power plants, transmission lines and export facilities,” according to a new report by the U.S. Chamber of Commerce Global Energy Institute.

The survey of likely 2020 voters is part of GEI’s new “American Energy: Cleaner, Stronger” initiative, which promotes continued economic growth and environmental progress through technological development and innovation in the energy industry.

The survey results echo the sentiment behind President Trump’s newly announced  executive orders revising policies to make it more difficult for state agencies to abuse the process and interfere in pipeline development. The action takes aim at states like New York that have continued to stymie natural gas pipeline development, despite the economic toll of limiting reliable  American energy supplies to the region.

An earlier Global Energy Institute report revealed that “Keep it in the Ground” efforts have cost the nation nearly $92 billion in GDP, $20.3 million in state and local tax revenue, and 728,079 jobs lost.

Trump noted efforts by activists to obstruct infrastructure development in his speech:

“Too often, badly needed energy infrastructure is being held back by special interest groups, entrenched bureaucracies and radical activists.”

“The U.S. energy industry has been among the most innovative sectors of the economy, and will continue to make America cleaner and stronger…Energy companies are investing in innovation and technology which is making our air cleaner even while our economy and energy security are increasing.”

In fact, America is already reaping the environmental benefits. Thanks to technological advancements and America’s impressive natural gas production, the United States has reduced CO2 emissions by almost 800 million tons, the largest in the history of energy. In 2018 alone, the increased use of natural gas in electricity generation helped the country avert 40 million tons of emissions, highlighting strides to improve energy efficiency. 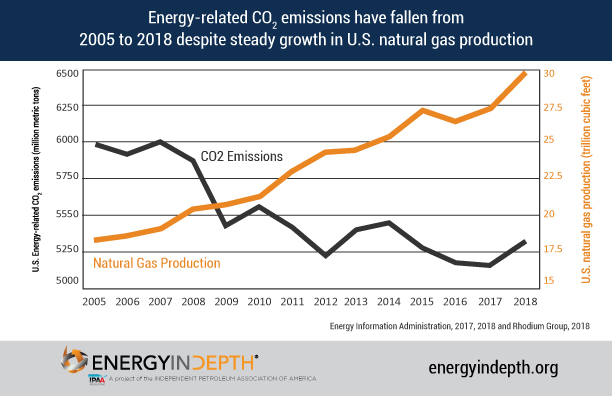 Guith explained what this progress means for Americans during a presentation at a conference earlier this week:

“The air is cleaner today than it was yesterday, and it will be even cleaner tomorrow.” – Chris Guith, @globalenergy #mmdc2019 #wvma #shale #naturalgas pic.twitter.com/kUPInfs9Ew