When the first successful Marcellus Shale well was drilled in Washington County, Pennsylvania over a decade ago, no one could have foreseen the tremendous economic impact and growth this industry would bring. A new study recently released by the Washington & Jefferson College Center for Energy Policy and Management quantifies just how great the economic impact has actually been for Washington County – the “Energy Capital of The East.”

The study looked at the economic impact of the upstream and midstream activities of shale development in the county from 2011 to 2013. According to the report (emphasis added):

Pennsylvania’s Marcellus Shale has been nothing short of impressive as oil and gas operators continue to develop the formation. Last year, the state produced 4 trillion cubic feet of natural gas and provided 16 percent of what the entire United Stated consumes on an annual basis. This type of development has created the need for an expanded labor force across the state, especially in Washington County. According to the report (emphasis added):

With an expanded labor force fueled by the oil and gas industry, Washington County has been able to decrease its unemployment rate by 50 percent between 2010 and 2014. From the report (emphasis added):

“Given the number of firms that have been established or expanded in recent years, Washington County has also been able to reduce its unemployment rate. The county pared unemployment down from approximately 10 percent in February of 2010 to below 5 percent in September 2014 (Bureau of Labor Statistics, 2014). (Pg. 21) 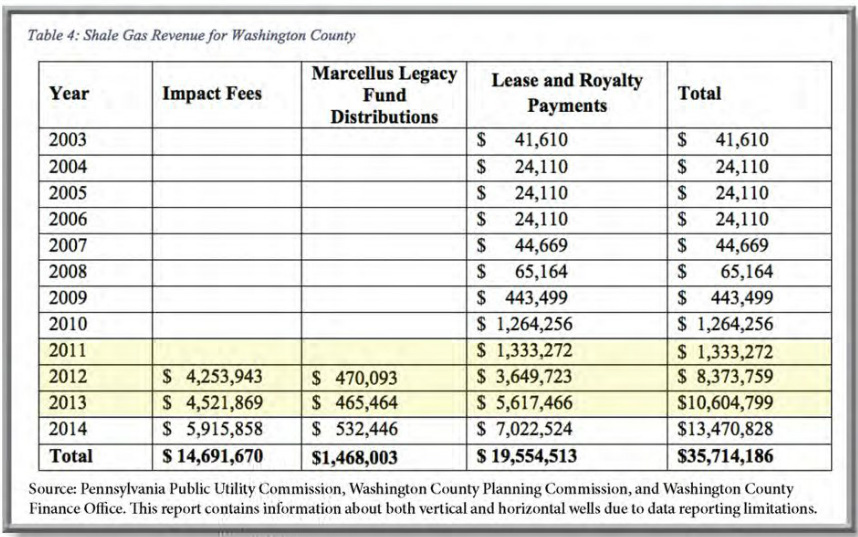 In total the county has received over $35 million, which has been used to offset the cost of county projects that would usually come out of tax payers’ pockets. In fact, because of these new revenue streams the county has one of the lowest tax rates in Southwestern Pennsylvania. Washington County has also experienced an increase in sales tax revenues with a clear correlation between wells developed and collected sales tax: 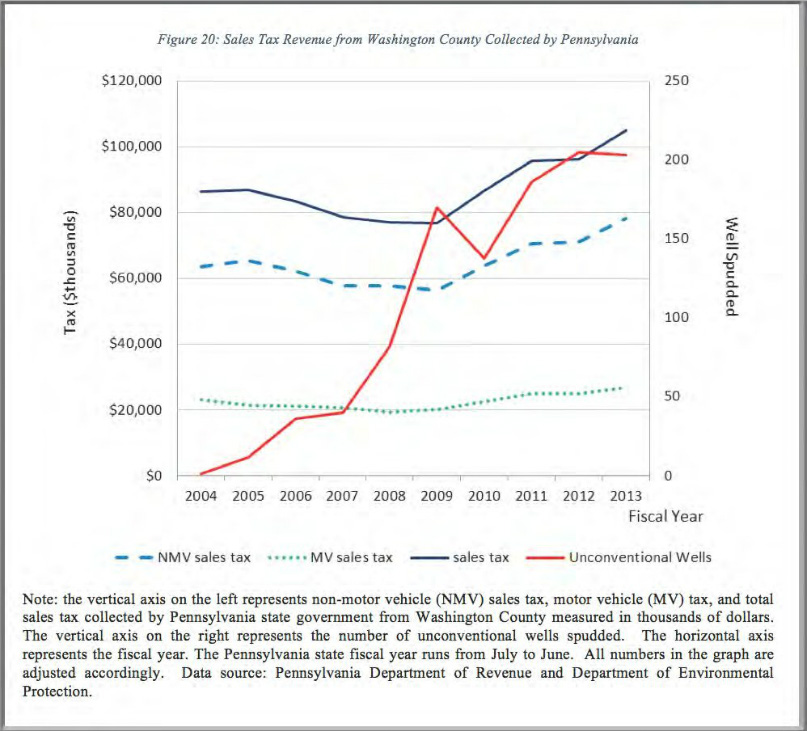 Jeff Kotula, President of the Washington County Chamber of Commerce had this to say about the study’s findings:

“The Washington & Jefferson study really proves what we’ve witnessed firsthand in Washington County. The natural gas industry is creating jobs and new opportunities for our businesses and residents. The real takeaway is finding even more ways to build upon this resource and further develop the region as a true energy and diverse manufacturing hub for future generations.”

By working with the oil and gas industry, Washington County, Pennsylvania has been able to increase tax revenues, lower tax rates for its residents, and put hardworking Americans back to work, all while providing affordable energy for people living states away. The Energy Capital of The East is a success story that’s still on chapter one. As this industry continues to grow here in the Commonwealth so will communities across the state.