We’ve chronicled in this space before how campaigners aligned with anti-development groups often use women and children as rhetorical props, citing without substantiating how development, if allowed to proceed, will have deleterious impacts on the health of these categories of folks in particular. It’s all part of an increasingly popular strategy among activists to encourage their spokespeople to “[not] worry about highly technical information,” and just use emotional appeals instead.  For example, children are frequently used as a prop by anti-fracking activists, as noted by a member Northern Wayne Property Owners Alliance:

“The use of children in a propaganda war against fracking is scary.  It was used in an attempt to build the case in Dimock.  If the anti natural gas folks were so sure the air was polluted and causing all kinds of ill effects, why did they take children there to act as poster fodder?”

This tactic hit home in Youngstown, Ohio, where Susie Biersdorfer of Frack Free Mahoning Valley rehashed debunked talking points on birth defects to me (I am 9 months pregnant). Here’s the video of what happened:

Frack Free Mahoning Valley, Susie Biersdorfer:  So Jackie I hope you’ve read some of the scientific literature about birth defects…and I see that you are , you know, pregnant, so I hope you’re not going out and visiting frack wells right now. Do you know about the scientific studies out in Utah and Colorado?

Energy In Depth, Director, Jackie Stewart: Wow. You are seriously attacking me, as a pregnant woman?

Frack Free Mahoning Valley, Susie Biersdorfer: “You know what, that’s what she gets”

This is certainly not the first time an activist has attacked a mom for having a favorable opinion on developing oil and natural gas, nor is it the first time that ban-fracking groups have tried to push debunked studies surrounding infertility, miscarriages, and birth defects as a means to evoke fear among women.  It’s happening all across the country. Take a look at actress Jerry Hall, spokesperson for “talkfracking.org”, pictured below. 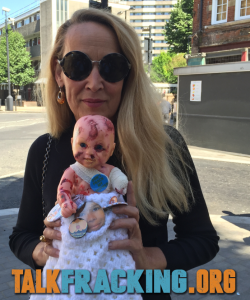 Even before birth, activists are attacking children and their mothers, by using shameful tactics, like we see above by both actress Jerry Hall and FrackFree Mahoning Valley organizer Susie Biersdorfer, through politicizing infant deaths and birth defects. By the way, the “scientific studies out in Utah and Colorado” that Susie Biersdorfer references in her  outburst have  been debunked by the Colorado Department of Public Health and Environment’s director and chief medical officer, Larry Wolk, who said,

“Many factors known to contribute to birth defects were ignored in this study.”

Sadly, this propaganda targeting pregnant women begins before the birth of a child and continues on into early childhood. For example, take a look at a protest in Colorado, where young children are used as  pawns in misinformation propaganda, highlighting the gross indoctrination of the natural gas opposition. 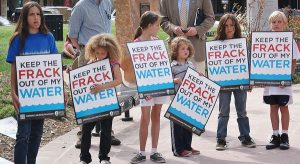 Fast forward to just a few years, and the next step is to graduate the early childhood indoctrination into “Lobbying for Kids.” Take a look at this video which clearly shows, Food & Water Watch Western Region Director Sam Schabacker has no problem using children to promote Food & Water Watch’s political agenda, which calls for national and statewide bans on hydraulic fracturing and the energy production it makes possible.

This is the sobering reality of the green agenda, the Keep It in the Ground Movement, 350.org, and CELDF’s so-called “Bill of Rights movement.  It’s personal, and it’s designed to scare the public, by any means necessary – and worst of all, it’s based on “science” that doesn’t pass muster.