Wayne National Forest Auctions Rake in Over $8 Million in Sales

The Bureau of Land Management’s (BLM) competitive online auctions of federal minerals in the Wayne National Forest have resulted in mineral sales of just over $8 million. To date, there have been four sales, the most recent occurring today, which yielded approximately $944,000, based on closing bid results.

The first two sales generated $1,515,110 for 12 Appalachian counties in Ohio, according to federal officials, who recently presented another round of checks in conjunction with the December 2016 and March 2017 sales.  Ohio counties will receive their portions of the September and December sales next year.

Today’s (Dec. 14) Bureau of Land Management online lease sale included 350 acres, all located in Monroe County.   The following 2017 Payments to Counties report show that 77 percent of the payments from the forest are a direct result of mineral leasing. 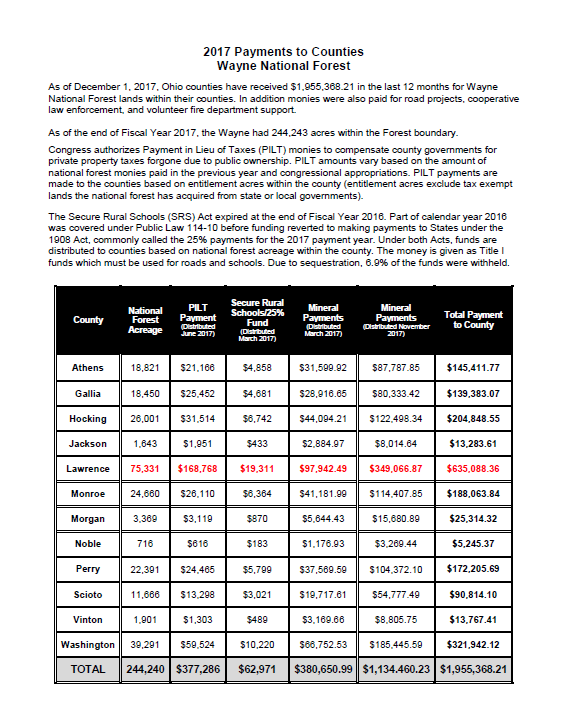 It’s important to note that none of these online sales would have been made possible without the BLM Live Internet Auctions Act.  In 2011, the Ohio Congressman who represents the Wayne National Forest, Rep. Bill Johnson, introduced H.R.2752, which amended the Mineral Leasing Act “to authorize the Secretary of the Interior to conduct onshore oil and gas lease sales through Internet-based live lease sales.” The bill went through the committee process and was adopted by unanimous consent and put into action in 2013, infuriating anti-fracking groups.

That’s noteworthy, because anti-fracking activist are now trying to take us back to archaic times with oral auctions. But as we all know, the real reason the “Keep It In the Ground” movement wants to revert back to oral auctions is so that it can violently protest and shut down these actions, as it has done in numerous areas across the country, despite the fact that there is in fact a formal protest process which includes public comment and a place for their voice to be heard.  So the fact that the BLM Live Internet Action Act passed with unanimous consent is no small thing — and further highlights just how out of touch these “Keep It In the Ground” folks really are.

Today was a great example of how this plays out, as fringe Ohio environmental activists put out a press release (of course they did) to encourage attendees (which was likely about four people) to bring a time capsule to the Wayne National Forest office to “submit letters or objects representing what they fear will be lost to climate change” during today’s online public auction.

But don’t believe the hype — like the unanimous consent of the people’s House, the vast majority of Ohioans have been overwhelmingly supportive of leasing in the Wayne National Forest.  This is certainly reflective from the people who live and work in Monroe County, as Monroe County Commissioner Mick Schumacher recently told the Times Leader,

In addition to the over $1.5 million in payments to local communities that’s been realized from just two lease sales, pending legislation for consideration could mean significantly higher receipts for local Ohio communities. In fact, it could more than double what they currently receive, the majority of that additional money would go directly to local schools.

As Rep. Bill Johnson has said,

“There is little doubt that Eastern and Southeastern Ohio are at the center of America’s energy renaissance. Energy development is having a positive impact on virtually every sector of our economy, including education. Our students are learning about the many job opportunities that have arrived – and will continue to arrive – resulting from the oil and gas boom. Schools are expanding their programs to help prepare students for new and exciting careers here at home, where they have been raised and educated.”

Well said and we couldn’t agree more, and the sale today of almost $1 million helps these schools in ways that they have never dreamed could be possible.