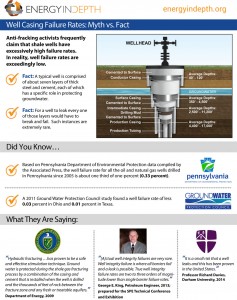 A frequently repeated claim out of the anti-fracking camp is that, despite an outstanding safety record, shale development poses a risk to groundwater resources because of allegedly high well failure rates. In reality, failure rates are extremely low. Why? Sound engineering practices and best science. A well designed for oil and natural gas extraction typically houses seven layers of thick cement and steel. Furthermore, each layer has a unique role in preventing leakage. In order for a well to leak during development, each of those layers would have to fail.

The Society of Petroleum Engineers (SPE) agrees that well failures are not commonplace whatsoever. In 2013 SPE said:

This is true across all of the United States’ highly-productive shale plays. Data compiled by the Associated Press found that the well failure rate for oil and natural gas wells drilled in Pennsylvania is approximately one third of one-percent (0.33 percent). In Texas and Ohio, a 2011 Ground Water protection study found a well failure rate of less than 0.01 percent and 0.03 percent respectively.

The industry and regulators alike have stepped up to the challenge of a zero percent failure rate. The Marcellus Shale Coalition outlines specific responsive actions for operators in the area and the American Petroleum Institute has a lengthy list of well construction and integrity guidelines.

Check out EID’s new infographic – Well Casing Failure Rates: Myth vs. Fact – to learn more about how the industry is protecting our groundwater resources while developing affordable domestic energy supplies.