What Are They Saying: “Boulder Bill” Being Rushed Through Colorado Senate 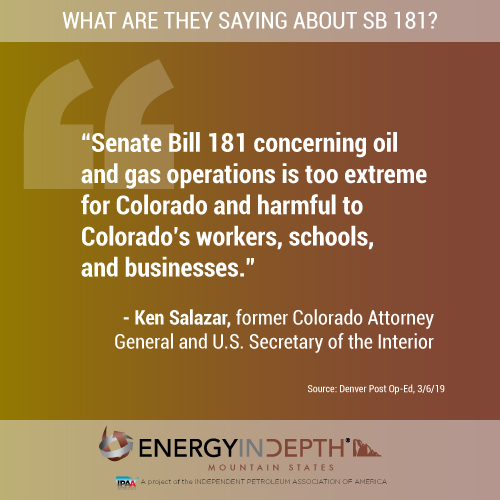 The lightning fast pace in which the “Boulder Bill” is flying through the Colorado State Legislature is showing no signs of slowing.  The State Senate is holding its floor debate on the bill today and a final vote is expected as soon as Wednesday.  Remember,  only a little more than a week has passed since Democrats quietly dropped the bill at 5pm on a Friday and then proceeded to run through three committee hearings —the final two of which were held within 12 hours of each other.

SB 181 is likely to pass the Senate this week and attention will then turn to the House.  Democrats enjoy a larger majority in that chamber, so from a procedural standpoint, more of the same is expected.  If the bill passes the Senate Wednesday, look out for the first House hearing to be scheduled as early as Thursday or Friday.  Once in the House, the bill will have to go through the same committee process as in the Senate: three readings and three committee hearings.

As EID has noted, SB 181 is drawing criticism from a growing number of prominent Colorado voices since its sweeping new regulations could have significant impacts on the state’s oil and natural gas industry.   Critics fear that it is being rushed through the Senate at an alarming rate before anyone can properly analyze it.

Here’s a look at what state leaders and media are saying about SB 181:

“Senate Bill 181 concerning oil and gas operations is too extreme for Colorado and harmful to Colorado’s workers, schools, and businesses…The oil and gas industry in Colorado creates over 100,000 jobs for hard-working Coloradans, provides over $1 billion to fund our schools and roads, and is responsible for 11 percent of the state’s gross domestic product. Now SB 181 will wrongly bring our Colorado energy success story to an end.” (3/6/19)

“Rather than rush to judgment — on an issue Colorado voters have already weighed in on — slow the train down, put down your weapons, and give everyone the opportunity to be heard. This should not be public health and safety vs. jobs and economic growth. In Colorado, we can achieve both, but it requires a cease fire and sitting around a table with open ears to get there.” (3/8/19)

“Nothing good comes of creating a rushed law or regulation that lacks the voices and input of those who would be most affected, including local communities, employers and workers. Continuing the current path is perilous. In addition to the overt threats we know are in the bill, we are equally concerned about unintended consequences, which we believe can be prevented through listening to the views of experts, including those who understand the science involved in energy exploration.” (3/11/19)

“More than jobs and the economy are at risk thanks to legislation on a fast-track in the General Assembly. SB 19-181 jeopardizes Colorado’s water future and those who depend upon it.” (3/10/19)

Greg Walcher, author and president of the Natural Resources Group:

“Introduced by House Speaker K.C. Becker and Senate Majority Leader Steve Fenberg, the bill would make what sponsors call ’the most meaningful changes’ to oil and gas regulations in 60 years. Funny, that is almost exactly what then-Gov. Bill Ritter said about ’a sweeping overhaul’ in 2007. That change turned a century of oil and gas law upside down, but obviously did not go far enough for people who want to stop all production.”

“The goal, for the bill sponsors and the governor, is to completely stop all exploration, development, production, and use. Exactly as promised.” (3/8/19)

“The full impact of this legislation is not yet known but, by all counts, it is likely to be even more harmful than the recently defeated Prop 112.

“However, my concern regarding SB 181 goes far deeper than the consequences from the loss of tax revenue. My concern is for the welfare of young Coloradans’ future ability to find jobs, pay college loans, or just live in a state with limitless opportunity.” (3/11/19)

“Dropping a bill on Friday night for a Tuesday hearing was an obvious ploy to keep the thousands of people, whose lives will be destroyed under this bill, away from the proceedings.” (3/8/19)

“Northwest Colorado communities have a great deal of experience and a lot to offer regarding the management of this important industry. It is a shame that this region has been excluded from conversations about the regulation of an industry so important to Colorado. We believe the Legislature needs to take a time out from rushing this bill through the process and discuss it with those who will be most significantly impacted; after all, last we checked, we are still part of the state.” (3/10/19)

Mesa County and the City of Grand Junction:

“The loss of Colorado’s energy sector that would result if SB19-181 passes would devastate Colorado’s economy, cripple both state and local budgets, and threaten thousands of working families, both in and out of the energy industry.” (3/5/19)

“Here’s a bit of unsolicited advice to Speaker of the House KC Becker, D-Boulder, and Senate President Leroy Garcia, D-Pueblo: It doesn’t matter how thoughtful a bill is if the public perceives that it was intentionally kept secret in order to quell opposition.”

“SB 181 is a huge omnibus oil and gas reform effort that proposes solutions to many unrelated problems that have proved elusive for years. It fundamentally changes the way the Oil and Gas Conservation Commission operates, and it also changes rules for how companies can develop the mineral rights of others without their consent. The bill requires continuous monitoring of emissions, and it also gives local communities control over the siting of wellheads. Putting all of this together in a bill that industry leaders say they didn’t see until Friday (or even anticipate) is a bit brash.” (3/6/19)

“The big fear of the sweeping reforms of oil and gas drilling proposed in Senate Bill 181 is that the legislation will be passed so hastily as to create unintended consequences that jeopardize thousands of industry jobs and billions in state revenue.  …The bill sponsors are getting criticized for not sharing details of the bill before it dropped — as if engaging stakeholders before there was a framework for the proposal would have resulted in a compromise everyone could live with.” (3/7/19)

“The bill encourages a patchwork of local so-called health and safety regulations that would disrupt economies and create confusion with very conflicting regulations in neighboring counties. A landowner residing in multiple jurisdictions won’t have a clear path forward or a clear understanding in how to manage the multiple conflicting requirements. It’s likely that those various rules and regulations may contradict themselves. Senate Bill 181 doesn’t make rural families feel safe.” (3/6/19)

“The Colorado Chamber is opposed to Senate Bill 181 based on a number of concerns. We’re concerned with the impact certain provisions in the bill will have on state revenues and Colorado’s economy. Most concerning are the provisions authorizing a potential moratorium on new permits and the provisions that may cause an operator to choose to stop or reduce its operations in Colorado, both of which would lower state revenues.” (3/7/19)

“As leaders of Colorado’s business community, we strive for a healthy business environment that supports our state’s workforce, benefits its citizens, protects our environment and makes Colorado the envy of the country. As such, it’s our belief that any proposals dealing with oil and natural gas development during this year’s legislative session deserve serious and thoughtful consideration. We hope you will engage in thoughtful stakeholder meetings to find common ground in changes to the oil and natural gas regulatory framework.” (2/28/19)