Shortly after California emerged from the first rolling blackouts in the state in 20 years, California Gov. Gavin Newsom announced a ban on sales of gas-only cars within 15 years, adding an increased load to the grid. The Golden State is already suffering from inadequate energy supply and without additional reliable energy sources, like natural gas, the plan could be disastrous for Californians, especially low-income residents.

California’s grid buckled during the heatwave this summer as cooling demand created a modest increase in electricity consumption. The grid failed to meet this increased demand because of California’s short-sighted energy policy to phase out natural gas plants and overly rely on energy imports to accommodate.

Gov. Newsom had to acknowledge the state’s failure to plan energy needs and promised to reevaluate the Golden State’s energy portfolio. Not long after, he seemingly forgot about California’s energy problems and decided the state will sell only non-gas fueled vehicles, moving auto owners to become increased electricity consumers.

Gov. Newsom’s mandate would put additional strain on the grid, forcing regulators to create a plan to cope with an inadequate supply as it stands and the need for additional resources to support such an unnecessary endeavor. Converting all passenger cars and trucks to run on electricity could raise energy demand in California by as much as 25 percent.  To prepare California for this huge increase in electricity consumption, the State must reinvest in its natural gas infrastructure and build additional capacity.

A Problem of Timing

According to Pew Charitable Trust, California’s ability to ramp up power supply quickly is the key problem:

“Electricity demand fluctuates throughout the day; demand is higher during daytime hours, peaking in the early evening. If many people buy electric vehicles and mostly try to charge right when they get home from work — as many currently do — the system could get overloaded or force utilities to deliver more electricity than they’re currently capable of producing.”

This lack of this quick start generation forced rolling blackouts across the state in September. When solar capacity dropped in the evening and energy imports were unavailable, domestic electricity production failed to satisfy demand. Solar is a great resource, but at this time is not a consistent energy source to meet power demands, even as storage is expanding. It cannot keep the lights on when the sun is down, even in sunny California.

Natural gas plays an integral role in California’s grid to supply instant demand for peak hours and when renewables are incapable of producing energy. The State Water Resources Control Board voted to extend the lives of four natural gas plants to ensure it can fit this role and supply current demand, after the state previously decided to shut them down without replacing their generation capacity. California doesn’t need to experience more blackouts to see why this decision was made and realize that natural gas is their best on demand option.

The benefits of natural gas aren’t solely for the grid, but for citizens. Denying this affordable resource to residents has serious effects. According to Robert Bryce, visiting fellow at Foundation for Research on Equal Opportunity:

Restrictions on natural gas use will result in even-larger energy bills for California residents and further exacerbate the state’s poverty problem.”

Successive mandates from California governors between 2008 and 2018 to source an increasing share of the state’s energy from renewables have raised energy prices in California. In fact, California’s electricity rate increased to more than 30 percent or more than six times the escalation rate seen in the rest of the country. Electricity has been the highest cost energy option for the last decade in California, whereas natural gas has been supplying the same energy at a fraction of the cost. 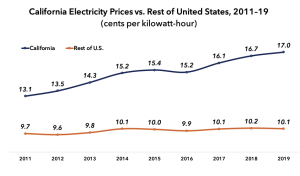 If electricity rates more than double or residents begin to consume twice the amount of electricity with EV charging, their economic well-being would be devastated. A 2019 California Gridworks report notes:

“Of course if electricity rates actually rose to that level there would be significant affordability challenges for all customers, economic dislocations, and a risk of mass shut-offs, especially for those that already face difficulties affording their bills and those that live in inefficient buildings.”

Natural gas is performing the same function as electricity for a fraction of the cost – heating homes and powering appliances. This cost-effective resource reduces the heat or eat dilemma that lower-income families face and gives them breathing room between paychecks.

To meet current demand, California will have to analyze its power generation portfolio and balance intermittent renewables with the instantaneous, economic generation of natural gas. Excluding natural gas from their energy stream means higher prices during peak demand and increasing reliance on energy imports from other states. And while natural gas will empower California’s transition to electric vehicles, it can still operate as a resource for residents, saving them from higher costs to power their homes. Fortunately, California still has time to do the right thing before the EV mandate goes into effect.