What You Need to Know About Fracking and Seismicity in Pennsylvania

Earthquakes are not something typically discussed in Pennsylvania, as there have only been a handful of felt events in the history of the state. That’s not to say earthquakes don’t occur — just that most are centered in two regions of the state and very few are felt at the surface. So it isn’t surprising there was considerable media coverage of this week’s release of a Pennsylvania Department of Environmental Protection (DEP) study that concluded that microseismic events in Lawrence County had a temporal and spatial relationship with a hydraulic fracturing operation that took place nearby.

Fortunately, DEP held a webinar on Friday that should have alleviated most of the fears and corrected the misinformation surrounding this finding, in large part because this is the only instance of seismic activity being correlated to oil and gas operations in Pennsylvania’s history.

Let’s take a look at what DEP’s study did — and did not — find on earthquakes and fracking in Pennsylvania.

On April 25, 2016, the Pennsylvania State Seismic Network (PASeis), the Ohio Seismic Network (OhioSeis) and the Lamont-Doherty Cooperative Seismic Network (LCSN) recorded microseismic events (five total) ranging from 1.8 to 2.3 on the Richter Scale in Mahoning, North Beaver and Union Townships just west of New Castle in Lawrence County. These were not felt earthquakes, meaning they not only caused no structural damage, but people would not have even been able to feel when they happened.

DEP notified Hilcorp, a company that had been conducting hydraulic fracturing operations roughly five miles from the epicenters, of the events that day. The company immediately volunteered to stop all operations and begin demobilization of the site, and later informed DEP that they had voluntarily stopped all fracking and stimulation on the well pad indefinitely.

“Although there is no definitive geologic association of events at this time, there is a marked temporal/spatial relationship between fracking/stimulation activities at the North Beaver NC Development well site and the seismic events on April 25, 2016.”

FACT: This is the only time in Pennsylvania’s history that oil and gas operations have been correlated with seismic activity.

This finding is the exception, not the norm by any stretch of the imagination. As expert after expert —including officials from the United States Geological Survey (USGS) and the National Research Council — have said, it is only under certain unique and limited geological conditions that completion activities are capable of inducing seismic events that can be felt at the surface.

The USGS has been monitoring seismic activity in Pennsylvania since around 1970, and since that time have identified two more seismically active parts of the state. One is the Triassic Rift basin in the Southeastern part of the state, while the other is located in the northwestern part of the state that includes Lawrence County and is part of a glacial retreat from Lake Erie. Yet not one of the seismic events mapped below has had any link with the hundreds of thousands of oil and gas wells in the state, which date back to the 1800s. 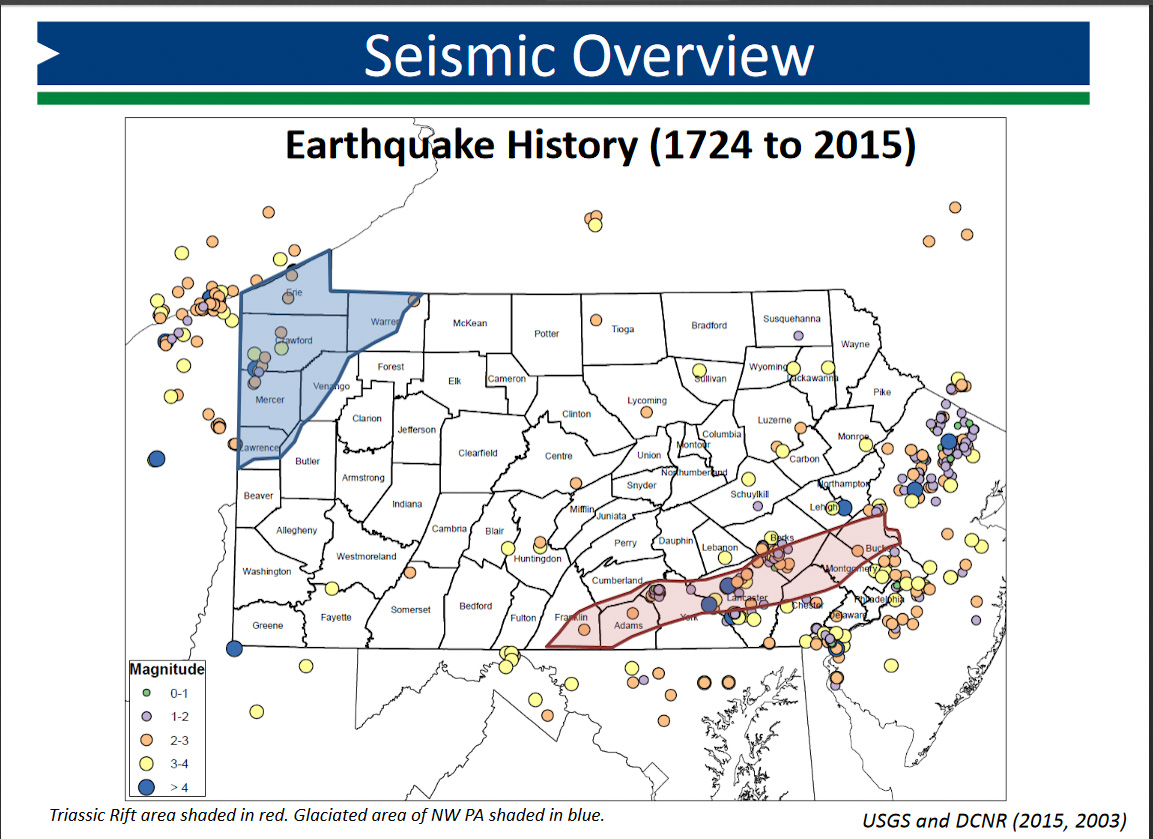 Here’s just how significant that is. From January 2004 to April 2016 there were 9,710 unconventional oil and gas wells drilled in Pennsylvania, including 71 drilled in Lawrence County. If we include conventional wells, there were actually 38,976 total wells drilled during that time period, including 75 in Lawrence County. FracFocus.org has records for 6,254 wells — including 61 in Lawrence County — that were hydraulically fractured during that same time period. And in that roughly 11-year period, only two wells have ever even been considered possible contributors to induced seismic activity.

That means that 99.98 percent of all unconventional wells drilled and 99.97 percent of all the wells hydraulically fractured during that time period never had a link to induced seismic activity — and no other wells have since.

Even in Lawrence County, where there have been far fewer wells drilled, 97.19 percent of those drilled and 96.72 percent of those fracked never had any links to induced any seismic activity.

A Penn State study analyzing seismic activity in Pennsylvania in 2013-2014 also found that “there is little evidence, if any, in the PASeis catalog for fracking-related seismicity. If the catalog does contain such events, then they are no larger than the mining-related events occurring on a regular basis throughout the Commonwealth.”

FACT: These events were microseismic, meaning they were below a level that would be felt by humans and caused no damage.

The earthquakes in Lawrence County ranged from 1.9 to 2.3 on the Richter Scale, which the following DEP graphic illustrates are “microseismic” events that are well below the level that can be felt by humans, much less cause damage. 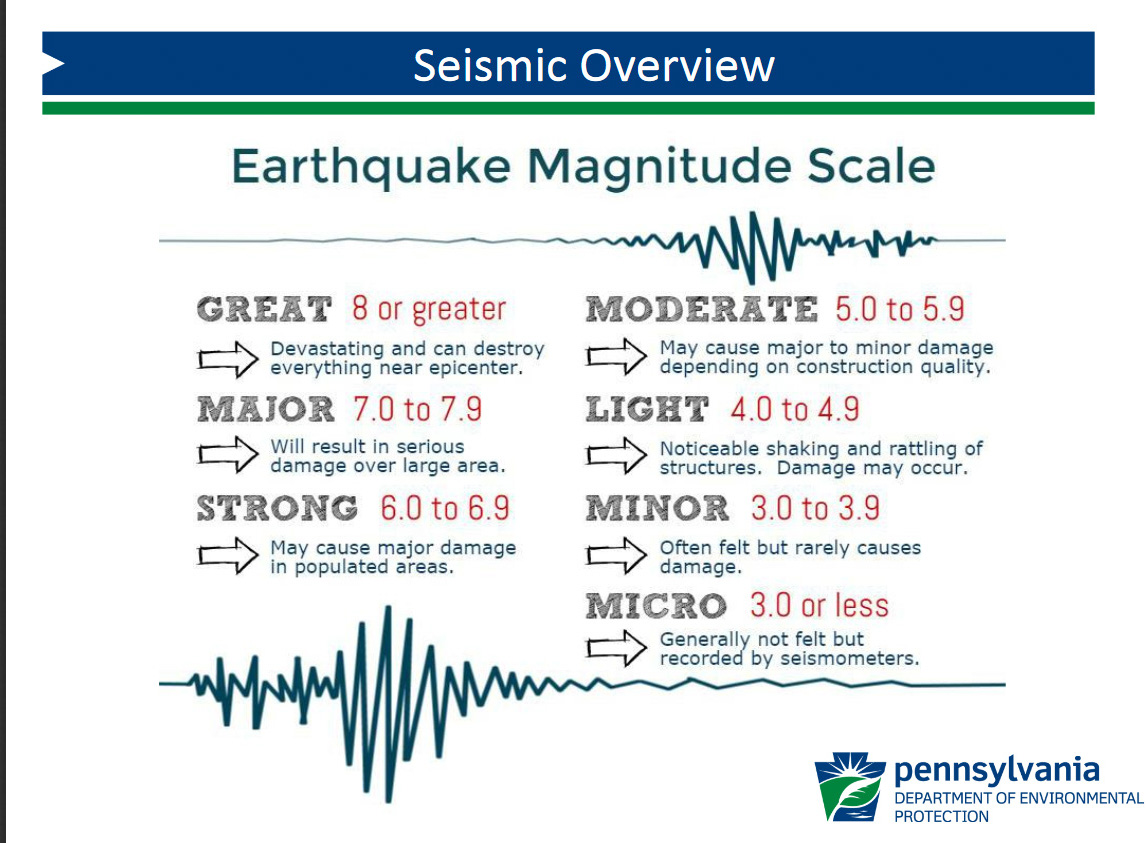 Stanford geophysicist Mark Zoback has previously given some perspective to the term “microseismic”:

“It is important to note that extremely small microseismic events occur during hydraulic fracturing operations. These microseismic events affect a very small volume of rock and release, on average, about the same amount of energy as a gallon of milk falling off a kitchen counter.”

Here’s another way to think of it. If you’ve attended a Pittsburgh Steelers or Penn State game, you know that the enthusiasm displayed by fans can be quite astounding, and when all of those people start stomping and cheering at the same time, a phenomenon scientists are calling a “fan quake” occurs. These “fan quakes” are being measured by how they would compare to an earthquake on the Richter Scale. Microseismic events don’t even come close to what fans are capable of producing.

FACT: DEP has made very specific recommendations for future risk mitigation that apply to a select area of the state, only involving the Utica Shale.

One of the major questions that came up during DEP’s webinar was how this will impact operations in other parts of the state, other operators, or even areas in Lawrence County outside of the three townships where the epicenters were located. The short answer is it won’t.

As a result of these events DEP has made very specific recommendations for future development, and those will only apply in “areas of alternative methods.” This is because seismic activity is so unlikely to occur in other parts of the state—and even more so unlikely in Marcellus Shale development. In fact, DEP specifically noted these areas of alternative methods would only apply to the Utica Shale formation because there are places, such as Lawrence County, where the Utica is notably closer to the basement rock formation. That’s not the case with the Marcellus.

Now, does that mean that any operations in that zone would be likely to induce seismic activity? No—but it does mean that DEP now has recommendations that will be written into future permits, and possibly turned into new regulations for those specific areas that will outline exactly what a company and the regulatory agency must do in the event of highly unlikely future seismic activity. While these are specifically outlined for Hilcorp, they will be applied to future operators as necessary as well. Some of these recommendations include: 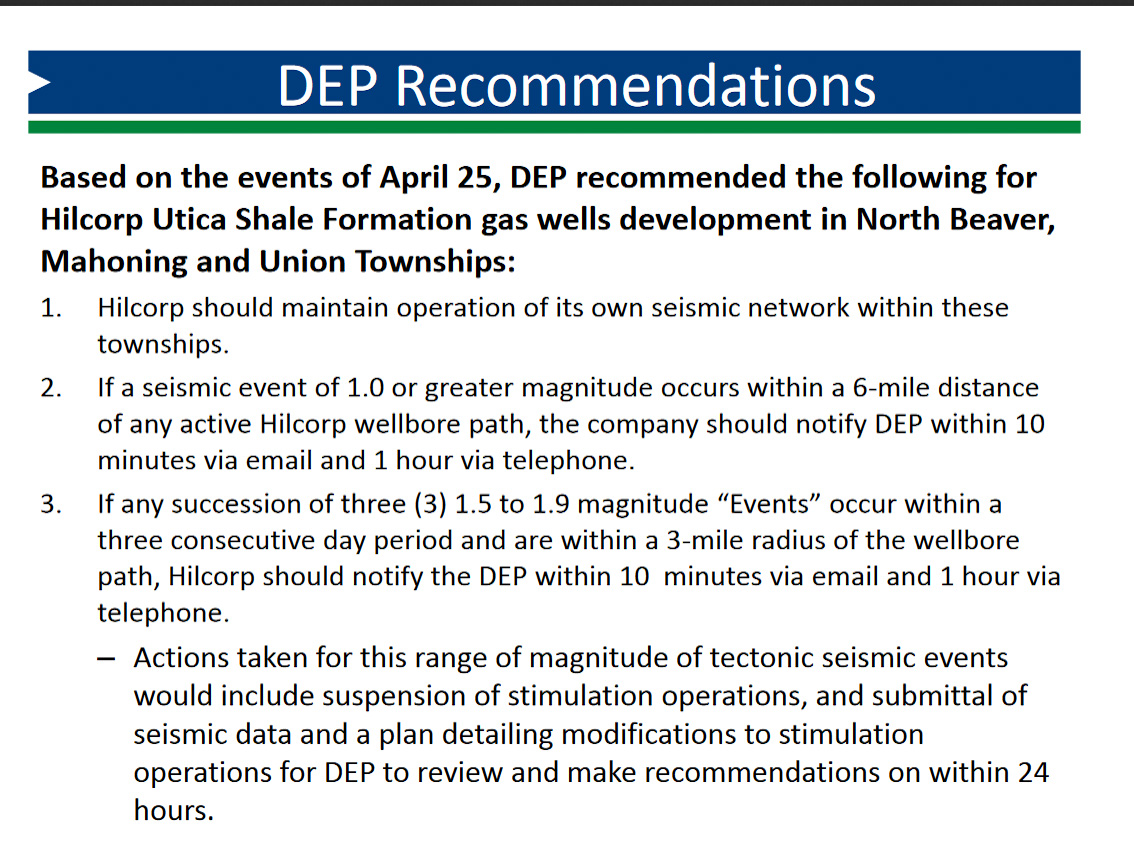 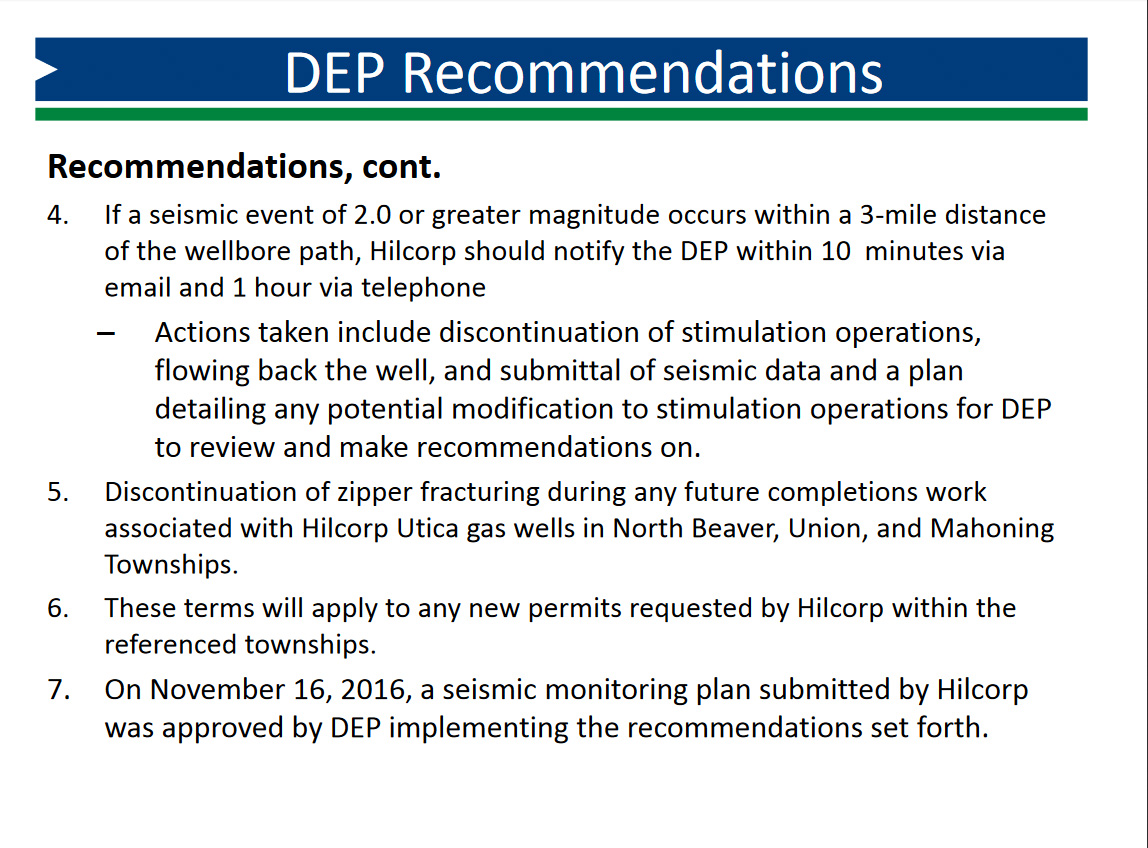 DEP has enough confidence that these were isolated events to have already accepted Hilcorp’s seismic monitoring program, which includes DEP’s recommendations. The agency has also issued a new permit for operations with a condition including the recommendations.