What You Should Know About Last Week’s COGCC Meeting

For months, national anti-fracking activists have used and abused the Colorado Oil and Gas Conservation Commission (COGCC) hearings process to capture media attention, deploying various political stunts to gain headlines. So it came as a welcome surprise last week when the activists were noticeably absent from the COGCC flowline rulemaking hearing.

Instead, the meeting proved to be a collaborative one, including input from a broad range of stakeholders including environmental groups, local governments, agriculture, and the oil and gas industry.

The hearing was part of a process, which began back in September 2017 at the request of Governor John Hickenlooper (D-CO) in accordance with the governor’s August 2017 announcement of a seven-pronged approach following review of oil and gas operations that directed the state’s regulatory authority, the COGCC, to review and strengthen existing flowline rules.

Energy in Depth was at the two-day COGCC rulemaking hearing, and here’s a recap of what you need to know.

During the public commenting period, there was a strong turnout from Colorado’s business community to show support for industry as the COGCC worked to finalize new rulemaking.  Supportive groups included the Colorado Farm Bureau, South Metro Denver Chamber, Vital for Colorado, Colorado Alliance of Mineral and Royalty Owners, Colorado Business Roundtable and the Denver Metro Chamber of Commerce — just to name a few.

Though these groups came from a variety of backgrounds and viewpoints, they all made clear the important role energy and local energy development plays in their own operations. Groups like Colorado Farm Bureau emphasized how vital it is for Colorado farmers and ranchers to have access to “domestic energy production through lower-priced oil, natural gas, and electricity” since growing and distributing food is such an energy intensive industry.

But the agriculture industry synergy runs even deeper, as the Colorado Farm Bureau also mentioned during public comment that many Colorado farmers and ranchers are also “mineral rights owners, and energy development in Colorado can provide a much-needed additional income stream for farmers and ranchers who are now suffering through yet another year of low corn, wheat, beef and other commodity prices.”

After Tuesday’s rulemaking hearing, the South Metro Denver Chamber (SMDC) penned an op-ed published in the Denver Business Journal celebrating the oil and gas industry’s willingness to “work with state officials and local communities to find a balance that makes sense for all Coloradans” throughout the COGCC’s flowline rulemaking process. And last week, was another example of that. With the task of strengthening existing rules, COGCC had the opportunity to hear from several operators who provided expert witnesses to testify before the COGCC to help clear up concerns or questions regarding important technical considerations and to provide an engineering perspective to address real world applicability of the proposed rules. Overall, the Colorado Oil and Gas Association statement clearly states the position of industry on these flowline rules:

“The safety of our families, friends, and communities is our highest value and it will remain so as our members continue to responsibly develop the energy we all need each day. It’s important Coloradans not only feel safe but can see the proactive steps we are taking to ensure that safety.”

2) About those Anti-Fracking Activists That Did Show Up…

The lack of the usual political theatrics by national anti-fossil fuel groups caught the attention of reporters like Colorado Public Radio’s (CPR) Grace Hood, as noted in her tweets from the hearing. 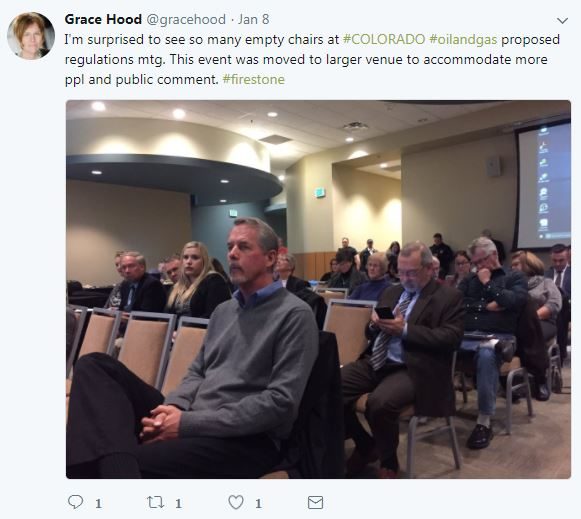 That didn’t stop some reporters from insisting that there was greater opposition to oil and gas than there was, of course.

To be expected, there were a few of the usual suspects in attendance, including State Senator Matt Jones (D-Louisville), and groups like League of Oil and Gas Impacted Coloradans, Oil and Gas Accountability Project, and affiliates of the national activist organization Earthworks.

Of note, La Plata County Commissioner Gwen Lachelt addressed the COGCC briefly, not as commissioner but as “myself and on behalf of the Fitzgerald’s and not the La Plata County Commissioners.” For background, the Fitzgerlad’s Lachelt is referring to is Terry Fitzgerald and her husband Jim who are featured on the Earthworks website. This disclosure is noteworthy given that her hometown newspaper, the Durango Herald, recently raised concerns in an editorial about her serving as both the head of an environmental group and as a county commissioner at the same time. In this instance, she seems to be back to speaking on behalf of the Oil and Gas Accountability Project, another environmental group she launched before she became a county commissioner, but it’s hard to keep track. No doubt, her testimony will likely raise some eyebrows.

As part of the collaborative process, the COGCC heard comments on whether public mapping of all flowlines in the state was necessary, given the 811 platform is already in existence. To give an idea of what exactly 811 is, here’s the Colorado 811 mission statement in 80 characters or less to sum up what it is, does, and why it exists. From Colorado 811’s website:

The above clearly outlines 811’s mission and the important role the 811 program plays in public safety. Recall that 811 is an existing state law in Colorado that requires oil and gas operators, along with any other utility owners, to be a member of 811. 811 holds a database of all utility lines running underground and uses this information to connect a caller, a local government, builder, homeowner, interested in excavating, to a facility owner in the area so that the facility owner can dispatch to the site and mark any utility lines on specific section of ground which includes telephone, cable, water, sewage, electric, and oil and gas.

That stated, what role does 811 play in the COGCC flowline rulemaking process? Keeping top of mind the objective here, which is the governor’s August decree tasking the COGCC to strengthen the existing rules – the COGCC went to work and reviewed existing rules, and called on stakeholder input throughout the process. From that review, and with the input of stakeholders, the COGCC crafted proposed flowline rules that will further leverage the existing 811 program to require oil and gas operators in Colorado participate in the 811 program as Tier 1 members. A Tier 1 member of the 811 program works closer with 811 than Tier 2 members.

COGCC heard comments from 811 Director of Operations Jose Espino on the second day of the hearing. When Espino was asked by the COGCC about potential security risks involved in making maps publicly available, he replied with some safety concerns involved in making maps publicly available including “security risks in being the repository for more detailed information.” From his testimony:

“Is there a vetting process? Who would take this information [mapping location info]? Is it being used for design purposes?”

These are some important questions to be considered in the mapping conversation. A chief concern among stakeholders and the COGCC is that maps on the COGCC website could pose a risk to public safety in that many may rely solely on old or out-of-date information before digging in their yard, instead of contacting 811 directly, as they should under the current system.

After two days of public comment and stakeholder input, the COGCC decided to delay a vote on the proposed rules until mid-February.

In its current form, the proposed rules would expand upon the actions already taken by the oil and gas industry as part of the recent Notice to Operators that required documentation and inspections of equipment and flowlines across the region, as well as building upon existing rules of flowlines to include more flowline testing, more reporting, more monitoring and mapping by which operators will provide the COGCC with maps indicating start point and end points of flowlines. No doubt, the Colorado oil and gas industry is an important economic driver. With such a heavy weight to bear, and as these rules come to a final vote next month, industry has and will continue to put safety of workers and the public at the forefront of its operations as well as keep that top of mind in its stakeholder role in the COGCC flowline rulemaking process.