Lip gloss, sunscreen, and gummy bears – any idea what these three things have in common? Key ingredients of each are derived from a barrel of oil, believe it or not – so-called “petroleum distillates” that are essential to making everyday household items like deodorant and shampoo work the way they’re intended, albeit used in small enough quantities to ensure they’re safe for the millions of Americans who consume them.

Of course, irrespective of the materials used in fracturing a well, for those interesting in determining how safe the procedure is, the central question remains a simple one: How is that substance supposed to find its way through inches-thick steel casing cemented into the well bore?  In other words, what are the pathways of exposure here? What exactly is it about a technology that’s been used millions times that just now, out of the blue, is suddenly so deleterious to our drinking water supplies? State regulators learned long ago that the way you protect groundwater is by keeping oil production fluids out of it. It’s a system that works; it doesn’t need EPA to be called in to slap it around.

On those questions, the Environmental Working Group (EWG) doesn’t claim to have many answers. In fact, all the group appears able and willing to claim in its recently posted white paper is that diesel fuel is being used in frac operations – notwithstanding the fact that federal statute explicitly identifies diesel fuel as a substance that, if used, immediately lands that operation under the regulatory authority of EPA.

But why would a fossil fuel-distillate like diesel be targeted for elimination when the formations being fractured already contain naturally occurring fossil fuels as it is? Good question. But it was. And so today, diesel fuel is simply not used in fracturing operations. Except in the trucks, of course – they still need diesel to run.

Whether EWG genuinely understands any of this, it’s tough to say. On one hand, the group states categorically on the opening page of its report that “toxic petroleum distillates” – which “include diesel” – are “threatening drinking water supplies from Pennsylvania to Wyoming,” citing a recent article by the advocacy group ProPublica in a half-hearted attempt to legitimize the assertion (ProPublica writer Abrahm Lustgarten is actually cited 12 separate times in 23 pages of text – but who’s counting?)

But here’s the thing: Later on that same page, we learn that a different culprit is to blame for these alleged incidents: Not diesel fuel itself per se, the report says, but “petroleum distillates that can be similar to diesel.”

Nonetheless, there you see “diesel” popping up again on EWG’s list of “petroleum distillates used in hydraulic fracturing,” with the group even citing an Aug. 2009 document published by the Pennsylvania Department of Environmental Protection (DEP) to back up its assertion. The only problem? The report to which they point says precisely the opposite of what EWG alleges. Here’s the report. See there on page 2 where it says the use of diesel fuel in fracturing operations has been “discontinued”? EWG must not have.

But let’s get back to these petroleum distillates for a second. Sure, you can find them in nail polish and wax paper, but how much of the fracturing solution do these things actually make up? Well, remember first that more than 99.5 percent of the materials used in a typical fracturing job is water and sand. So what makes up the remainder? Included below is a cut-away image of one of Energy In Depth’s most popular downloads. 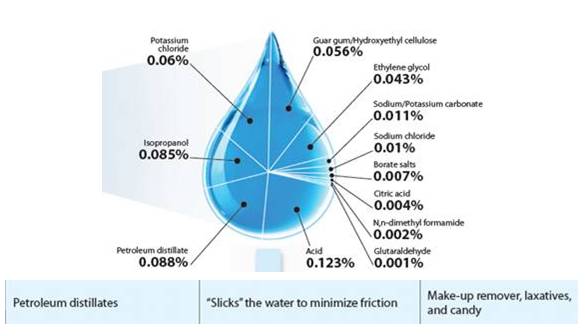 Adapted from a similar chart organized by the U.S. Department of Energy and the Ground Water Protection Council (page 78 of the PDF, available here), this document shows us a couple things: For starters, specific to the one-half of one-percent of the fracturing solution that’s not water or sand, only 0.088 percent of what remains is made up of these distillates. And second: Even if you accept the premise that infinitesimally small amounts of those distillates are used in the typical frac job, we’re talking about a substance that you could just as easily find in “make up remover, laxatives, and candy.”

See the game being played here? EWG has no evidence that diesel fuel is being used in fracturing operations; it has no evidence that rounding error-volume distillates are dangerous; and it has no interest in providing the proper context to its readers so that they might be able to make these determinations for themselves.

And as mentioned, perhaps the most regrettable reality of this whole report is that the group barely even attempts to explain to its readers how these “dangerous” materials are supposed to gain access to our drinking water – sine qua non to this entire debate. And once again, there’s a reason for that too: Steel casing is installed and cemented into place in each well that’s fractured nationwide, ensuring that what’s going down inside the wellbore has no chance of affecting that which is occurring naturally outside it. They know this. And that’s why they worked hard to ensure their report doesn’t say it.

As for the other blatant errors in the EWG report, perhaps we’ll leave some of those for another day. After all, how many times should we be expected to remind these folks that hydraulic fracturing has never been regulated under the Safe Drinking Water Act, and therefore would’ve never needed an “exemption” from it? Our sense is that, by now, they know what’s factually accurate in this debate and what is not.

Our other sense is this: They just don’t care.