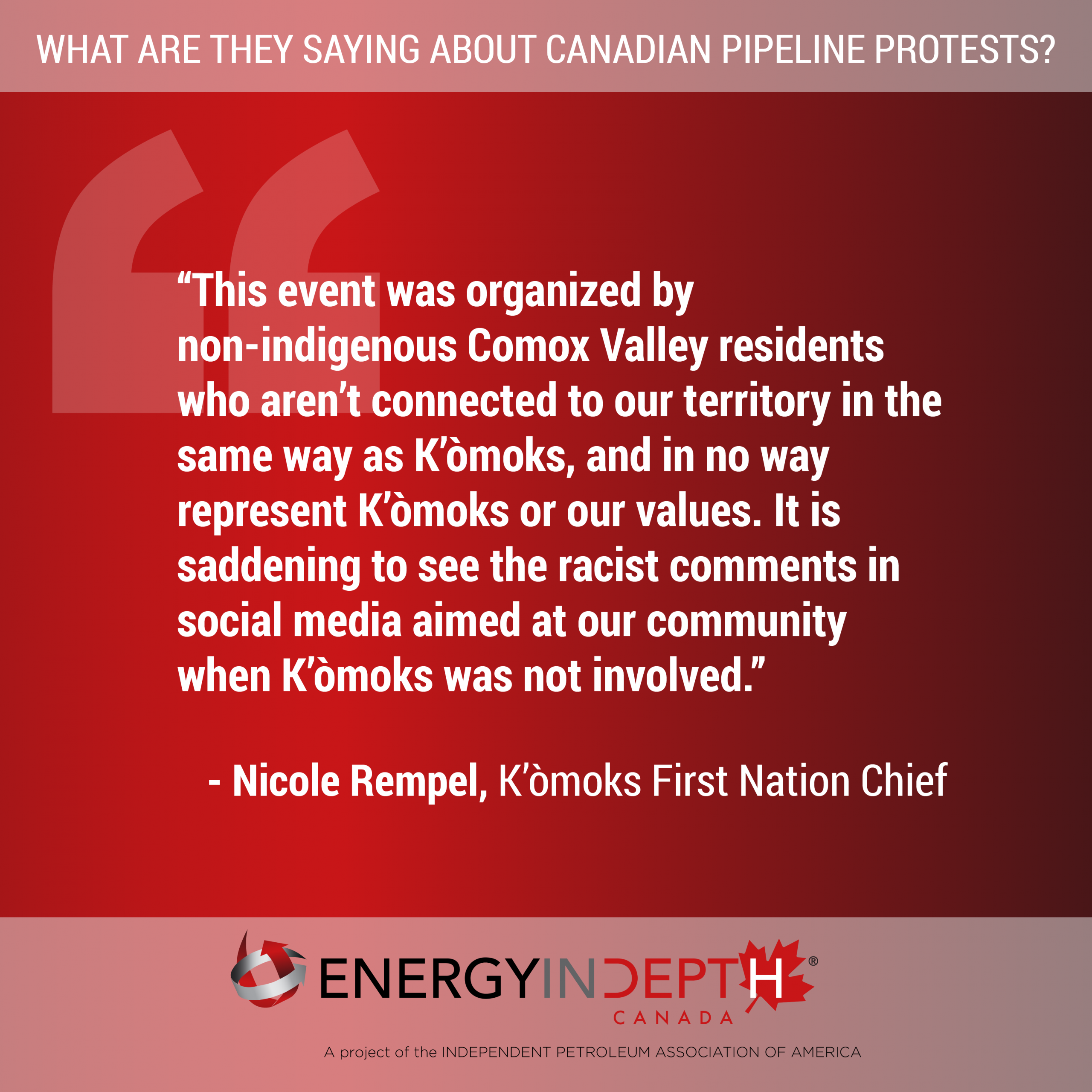 Transportation and shipping have been massively disrupted in Canada due to protests that—in an attempt to halt the construction of a natural gas pipeline—are blocking among other things, railroads.

Recently, activists against the Teck Frontier’s Coastal Gaslink Pipeline, a proposed project that would ship British Columbian natural gas to an LNG facility on the Pacific coast, have blocked railways. Just one consequence was that Via Rail had to suspend service between Montreal-Toronto and Toronto-Ottawa. These blockades haven’t just disrupted commuters’ schedules—they have had a huge drain on Canada’s economy, bearing responsibility for layoffs and rising food prices. What’s more, multiple members and elected officials of First Nations have been clear that activists should not misrepresent their views. For example, Rene Skin, the Chief of the Skin Tyee First Nation, was adamant about her tribe’s support:

“We’ve always been in support of the pipeline. We voted together… Lots to do with jobs, up and coming housing, people will be able to start their own companies. For years to come there will be a lot of benefits.”

“A lot of what I see out there right now, from these people talking about it, is basically opinion. It’s not fact. In fact, in the Indian Act band councils are legally authorized to sign agreements and contracts on behalf of communities.”

Yet further fueling the protests are non-indigenous activists—some of whom receive donations from foreign groups and funnel it to indigenous people who join them.

Who’s Behind the Protests?

Magnifying what began as a protest of a handful of Wet’suwet’en hereditary chiefs is a group of non-indigenous and ill-informed activists. The Vancouver Sun reported that activists claimed they were “fighting against the Alberta oilsands” despite the fact that the blockades are in protest against the Coastal Gaslink pipeline, which would move British Columbia natural gas and has nothing to do with Alberta oil.

Ross further called into question who is participating in these protests, and whether they have appropriate claims to represent First Nations:

“There’s a lot of people that aren’t from these communities, that aren’t Aboriginal, that are saying hereditary leadership has full authority, and they’re not doing it based on any facts.”

One of the most outspoken groups during the blockades has been Extinction Rebellion, which staged a protest outside of British Columbia Premier John Horgan’s home. Cloaking themselves as allies to First Nations, Extinction Rebellion also released a statement condemning the police officers who had enforced an injunction to end a blockade preventing access to a Coastal Gaslink construction site:

“The events of the past week on Wet’suwet’en territories have been an extreme demonstration of colonial violence, approved by the Trudeau and Horgan governments in contravention of Wet’su’wet’en, Canadian and international law.”

Members of Extinction Rebellion would like to ignore how it’s the blockades that are illegal as much as they would like to omit mentions of their ties to foreign funding which props up this group of agitators. Extinction Rebellion’s foreign funding is consistent with other environmental activist groups in Canada who have received millions of dollars to attack the nation’s energy industry.

The situation is beyond ironic: some of the wealthiest people on earth are funding a radical environmental group which is trying to stop a project that would benefit Canada’s economy while making investments in First Nations communities. Adding to the irony is the fact that the Coastal Gaslink pipeline would bring natural gas to markets that are still dependent on higher-emissions fuel sources.

Some indigenous groups have tried to distance themselves from the protests. K’òmoks First Nation Chief Nicole Rempel issued a statement when the group realized Extinction Rebellion was using the tribe’s name to promote a February 10 blockade on Highway 19:

“This event was organized by non-indigenous Comox Valley residents who aren’t connected to our territory in the same way as K’òmoks, and in no way represent K’òmoks or our values. It is saddening the see the racist comments in social media aimed at our community when K’òmoks was not involved.”

“There’s quite a bit of support for this project. But people are afraid to speak up because, in the past few years, people that [have] spoken up were either ostracized … ridiculed, bullied harassed, threatened, and being called a traitor—a sellout …There’s a small group of members from the Wet’su’wet’en Nation that doesn’t support the projects.”

George further shared her perspective on how disagreement from a few Wet’suwet’en Nation members was co-opted by outsiders:

“There was community meetings. There was obviously a small group of individuals that didn’t support that crashed the meetings and was very outspoken. Then it had to come to a vote through band council. And again, there was a lot of resistance from a small group of people. So it went to a blind vote in camera, and the results came out as it is now that they voted to sign. So from there, the resistance built and gained a lot of momentum from a lot of outsiders from the U.S. and from Eastern Canada, which unraveled to what it looks like today. There’s a lot of support of Wet’suwet’en members and there’s members that work out on the projects … that’s being withheld from going to work because of the block.” (emphasis added)

Foreign-funded groups like Extinction Rebellion aren’t representing the interests of First Nations or Canadians as a whole. Their motives and actions should be met with deep skepticism and criticism as they harm jobs and livelihoods, especially in the communities they claim they are helping.