Former Pennsylvania DEP Secretary John Hanger recently made a great point about Williamsport’s becoming the 7th fastest growing metropolitan region in the country by comparing it to Reading, another small city in the Commonwealth.  He noted how natural gas had lifted the former, while the latter languished.  What a great contrast!  But, there’s another comparison worth making – the one between Williamsport and Ithaca, NY, where the Park Foundation keeps that huge treasure that funds so much of the anti-gas opposition and where tigers like Tony Ingraffea snarl epithets at the industry responsible for so much economic progress in previously beleaguered communities.  Yes, I mean that Ithaca, the Ivy League town on the lake, where wine and brie events define one’s status and elites decide what the masses need.  No one, of course, can ever beat Ithaca in the condescension department, but Williamsport has bested Ithaca rather impressively where it counts – in the battle for economic growth and it’s attributable to natural gas.

The Bureau of Economic Analysis annually reviews how 366 metropolitan areas in the U.S. are doing economically.  It measures the gross domestic product (GDP) generated in each, identifies the sources of growth or decline and ranks the areas compared to others.  Ithaca and Williamsport are similar communities in size, with populations of roughly 30,000 persons each and per capita incomes of slightly above $19,000 in both cases.  Both have heavy populations of students.  Ithaca, though, has a much higher median home value ($181,000 vs. $106,000 in Williamsport) and Williamsport has more than twice as many families as Ithaca (6,395 in Williamsport vs. 3,022 in Ithaca), which goes a long way toward explaining the different outlooks on life that prevail in the two places – Ithaca is a community of accumulated wealth and Williamsport is a community of aspiring wealth.

Well, Williamsport is getting its wish!  It grew by 7.8% in 2010, ranking 7th in the nation for GDP growth in 2010, while Ithaca gained only 1.0%, giving it a rank of 252nd out of 366 metro areas.  Williamsport grew by more than three times the national average of 2.5%, while Ithaca fell behind at barely tw0-fifths the U.S. rate.  Williamsport grew its economy by $247 million (in constant dollars), while Ithaca added only $35 million.  Four years ago, Williamsport was feeling the pains of economic contraction as jobs were leaving and it faced a seemingly rust belt future.  Ithaca’s economy was $32 million larger and the gap widened over the next two years to $169 million, but, in 2010, natural gas companies and those who service them came to Williamsport in earnest as exploration ramped up.  The results have been astounding and now Williamsport has a $43 million advantage over Ithaca. 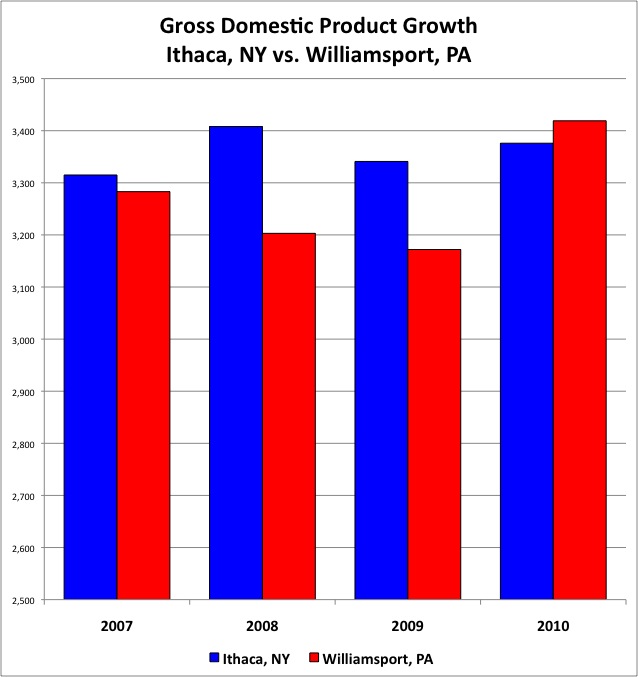 Can other factors explain all this?  Well, some might say so, but those claims ring hollow when one examines Pennsylvania well drilling data.  The following chart illustrates what has happened in the four counties Williamsport serves as a center.  Take a look: 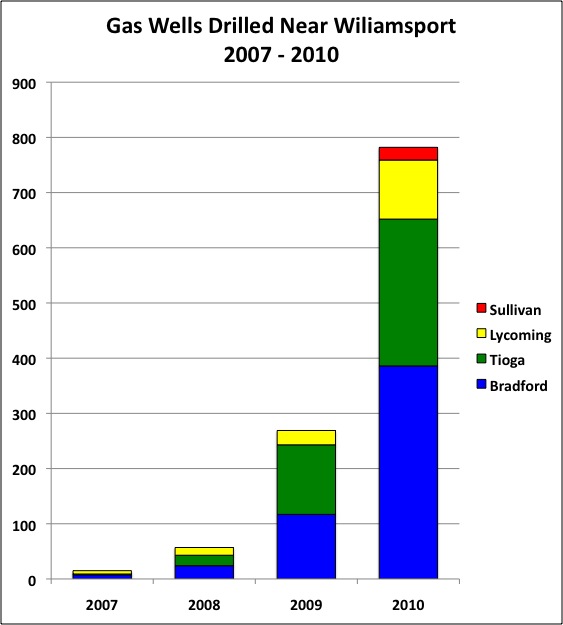 The pattern is pretty obvious, isn’t it?  2010 was when gas drilling took off in the region Williamsport serves.  Some 782 new wells were drilled that year, more than twice the number drilled for the previous three years combined.  It was also the year, major gas companies and suppliers opened offices in the City.  Now the City is booming with activity including new lodging, new restaurants and a dynamic downtown that paints an entirely different image than one most had of it just a few years ago.  It even boasts of a new “energy park” that caters to the Marcellus Shale industry, which you can learn more about here.  The BEA data confirms the role of natural gas in helping this big win by Williamsport when it documents one-quarter of the growth coming directly from the mining sector and the remainder coming from sectors affected by natural gas growth (e.g., construction and retail trade), not to mention the leisure and hospitality sector, which advanced by 0.26% in Williamsport and only 0.15% in Ithaca.  So much for the negative impact of natural gas exploration on tourism!

The best part, however, is that Williamsport and the surrounding countryside are more beautiful than ever, as this video taken a few weeks ago in nearby Penn Township illustrates:

The Ithaca area is also beautiful, of course.  Moreover, the Finger Lakes produces some of the best wines in the world, but one must wonder if its elite have been imbibing too much of it or, perhaps, engaging in too much whining of another sort.  They are getting left behind and this walk-off home run win by Williamsport suggests they need new talent to come home and lead Ithaca to real victory where it counts, with working families.     You don’t want the home team to come off like the Orioles or Pirates, do you?