With Each New Batch of FOIA’d Emails, More Insight into Collusion behind RICO Climate Effort

The Washington Times has just reported on a batch of newly released emails, which pull back the curtain even further on the level of collusion and coordination that’s taken – and still actively taking — place among those who would like state attorneys general to use RICO laws to prosecute dissenting voices on climate change.

These new emails show a number of folks from Rockefeller funded organizations working together to promote the InsideClimate News (ICN) stories to increase the echo chamber.  They also reveal that after George Mason University (GMU) professors Jagadish Shukla and Edward Maibach sent a letter in September 2015 with 18 other colleagues to U.S. Attorney General Loretta Lynch and President Obama asking them to explore RICO charges against climate “deniers” and their funders, the coordinated campaign went into “full damage-control mode,” as the Washington Times puts it.

As EID reported recently, Climate Nexus, an environmental PR firm funded by the Rockefeller foundations, was called in to help manage the enormous volume of criticism these professors received from their colleagues in the wake of their letter. One of the emails from September 29, 2015 comes from Shukla to Michael Mann, a climate activist who once filed a lawsuit to muzzle individuals he called “climate deniers.” Mann also sits on the advisory board of the Rockefeller-funded Climate Accountability Institute (CAI).  In the email, Shukla asks Mann for help: 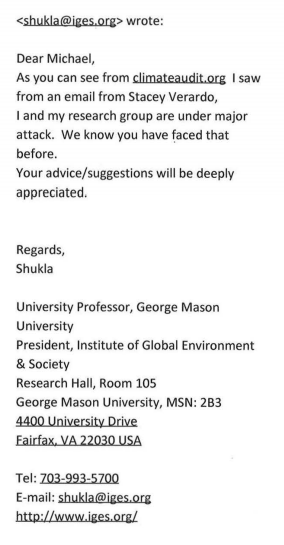 Mann then introduces Shukla to Aaron Huertas from the Union of Concerned Scientists and Philip Newell of Climate Nexus, asking if they “might have some suggestions and/or resources that you can bring to bear here” in light of the controversy the letter had instigated. 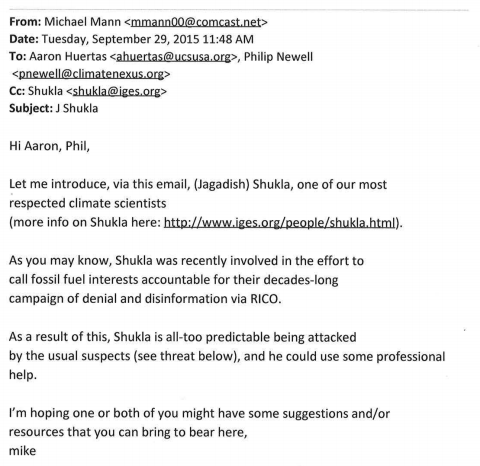 Newell’s response is quite interesting: 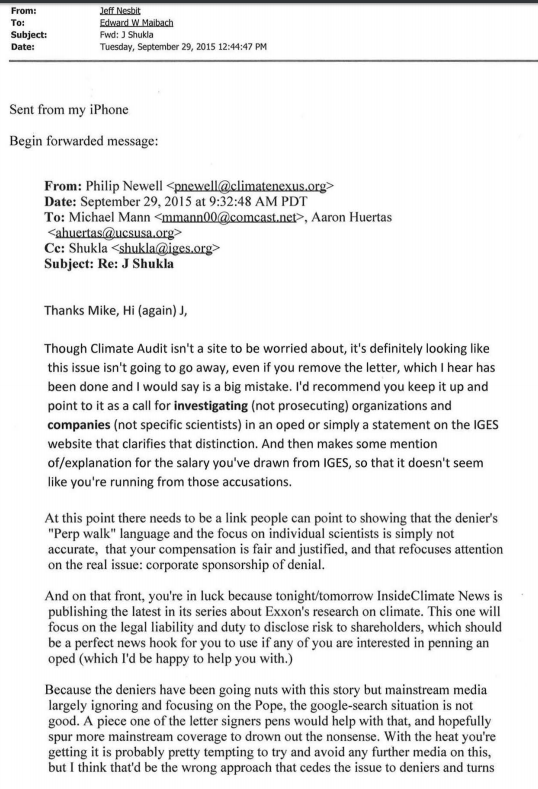 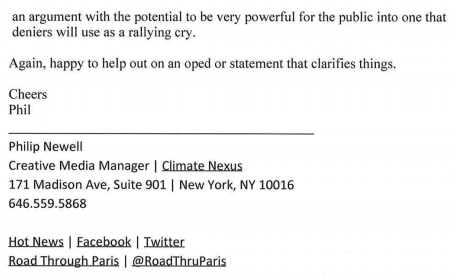 To sum all this up, Newell basically tells Shukla, et al. to buck-up and double-down, suggesting that help was on the way in the form of InsideClimate’s upcoming series attacking ExxonMobil.

In another email, also dated September 29, 2015 InsideClimate publisher David Sassoon wrote to six Climate Nexus executives including Newell with an embargoed copy of its #ExxonKnew series.  He said, “Here’s the story, embargoed until 12:10 am tonight 9/30/15.” 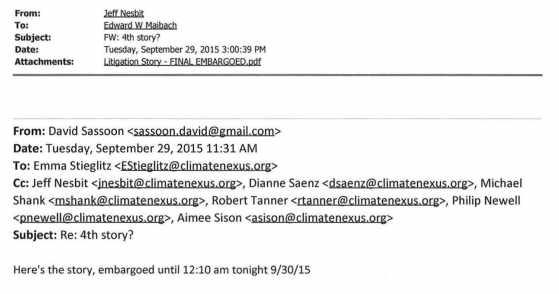 These revelations come the same week in which the Rockefeller Brothers Fund (RBF) sent a letter to the House Science Committee stating that it will not comply with the committee’s request to turn over documents relating to its collusion with activists and state attorneys general. As RBF president Stephen Heintz boldly declares in his letter,

“As part of this body of work, the RBF has supported efforts to encourage private companies to assess how climate change risks may impact their future business. There is no ‘collusion’ as asserted in the letter from the 13 members of Congress—only open and routine cooperation between funders and their grantees.” (emphasis added)

The “nothing to see here” defense captured in the RBF letter has become the talking-point-of-choice for all activists confronted by the release of the emails. Peter Frumhoff of the Rockefeller-funded Union of Concerned Scientists also told the New York Times that they have transparent the whole time and “there’s nothing hidden here.”

Of course, what the emails actually show is that Frumhoff was secretly working with state attorneys general to instigate climate investigations long before InsideClimate News and Columbia School of Journalism released their stories. Erich Pica of the Rockefeller-funded Friends of the Earth also met with Maryland Attorney General Brian Frosh in February, just days before Frosh announced he was considering an investigation into Exxon.

And we’d be remiss if we didn’t mention the emails first reported by Reuters that show staff with the New York attorney general’s office asking activist Matt Pawa, who sits on the board of the Rockefeller-funded Climate Accountability Institute, to not reveal to a Wall Street Journal reporter that he had briefed them before their March 29th press conference with Al Gore. That’s not a request one would typically make of someone involved in a “transparent” and definitely “not hidden” campaign.

If activists are right about one thing, it’s this: their collusion isn’t hidden anymore.