The U.S. Environmental Protection Agency (EPA) released its draft 2017 Greenhouse Gas Inventory (GHGI) on Tuesday, and the new EPA data show that methane emissions from oil and natural gas systems continue to fall at the same time production has continued to ramp up. From the report,

The new EPA data is all the more relevant as the U.S. Senate is expected to vote soon on repealing the Bureau of Land Management (BLM) venting and flaring rule aimed at regulating methane emissions on federal lands. The U.S. House of representatives voted to repeal the rule using the Congressional Review Act earlier this month.

Notably, the new EPA data show that petroleum system methane emissions have decreased significantly — just under 29 percent since 1990, 13.5 percent since 2005 and 17 percent since 2011 — primarily due to “decreases in emissions from associated gas venting and flaring.” A huge chunk of those reductions occurred between 2014 and 2015, according to the EPA,

“[P]roduction segment methane emissions have decreased by around 8 percent from 2014 levels, primarily due to decreases in emissions from associated gas venting and flaring.”

The following EPA chart illustrates these significant decreases, which have occurred as oil production has increased 81 percent since 2005 and 28 percent since 1990.

The EPA also reports that methane emissions from natural gas systems have decreased 18.6 percent since 1990 “largely due to a decrease in emissions from transmission, storage, and distribution.”

Equally notable is the fact that methane 2015 natural gas system methane emissions are 1.3 percent below 2005 levels and 1.1 percent below 2011 levels, as the following EPA chart shows.

At the same time that methane emissions from oil and gas systems have fallen as production has skyrocketed — thanks to the shale revolution — increased natural gas use continues to drive down greenhouse gas emissions, according to the new EPA data.

EPA reports that overall greenhouse gas emissions are down 2.2 percent from 2014 to 2015 and 11.2 percent below 2005 levels, as the following chart illustrates. 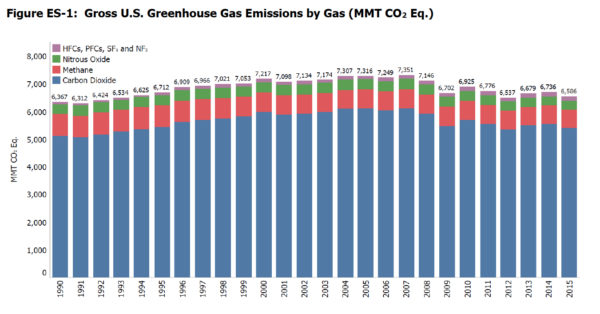 Increased natural gas use is the first reason on EPA’s list of explanations for these decreases,

“The decrease in total greenhouse gas emissions between 2014 and 2015 was driven in large part by a decrease in CO2 emissions from fossil fuel combustion. The decrease in CO2 emissions from fossil fuel combustion was a result of multiple factors, including: (1) substitution from coal to natural gas consumption in the electric power sector; (2) warmer winter conditions in the first quarter of 2015 resulting in a decreased demand for heating fuel in the residential and commercial sectors; and (3) a slight decrease in electricity demand. Lastly, since 1990, U.S. emissions have increased at an average annual rate of 0.2 percent.”

Again, EPA gives credit where credit is due: natural gas use for electrical generation.

EPA reports that electricity generation-related emissions decreased 6.7 percent from 2014 to 2015 alone “primarily due to decreased CO2 emissions from fossil fuel combustion due to an increase in natural gas consumption…” Natural gas use for power generation increased 18.7 percent during this time.

All told, this latest EPA data further confirms what EID has reported many times before: Fracking is the No. 1 reason the U.S. is the only major country that is reducing GHG emissions. Furthermore, EPA data shows the methane leakage rate from natural gas systems is just 1.5 percent, agreeing with numerous reputable reports that show the rate ranges from 1.2 percent to 1.9 percent — well below the rate needed for natural gas to maintain its climate benefits.

So considering this new EPA data show methane emissions continue to fall at the same time production increases, this is just the latest example of why costly and duplicative methane regulations on the oil and gas industry are completely unnecessary.