With the Bureau of Land Management’s (BLM) controversial venting and flaring rule targeting oil and gas infrastructure on public lands postponed indefinitely, evidence continues to mount showing why the regulation has frequently been called a solution in search of a problem.

As the following chart from Energy Intelligence Group’s July 26 issue of World Gas Intelligence shows, GGRF data based on National Oceanic and Atmospheric Administration (NOAA) infrared satellite estimates of more than 16,000 locations in about 90 countries show U.S. flaring decreased from 11.8 billion cubic meters (bcm) in 2015 to 8.9 bcm in 2016. 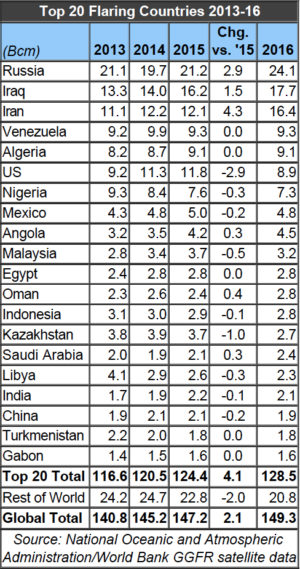 Notably, GGFR program manager Bjorn Hamso told Energy Intelligence Group that much of the credit should go to infrastructure upgrades in North Dakota — news that will come as a blow to activist groups who have long made Bakken Shale development the poster child of their campaign for federal regulations. As the July 26 issue of World Gas Intelligence notes,

“Hamso believes this was partly down to continued investments in pipeline infrastructure in North Dakota to gather more gas from oil production sites.”

The most recent data and media reports support Hamso’s analysis. North Dakota Petroleum Council vice president Kari Cutting recently told the Grand Forks Herald that industry has invested $13 billion in pipelines, gas processing plants and other infrastructure to capture natural gas since 2006, allowing more of the valuable commodity to be brought to market. The Grand Forks Herald also recently reported that “today all but 2 percent of (North Dakota oil) wells are connected to a natural gas gathering pipeline.”

This has led to a dramatic reduction in flaring in North Dakota, as the U.S. Energy Information Administration reported last year, 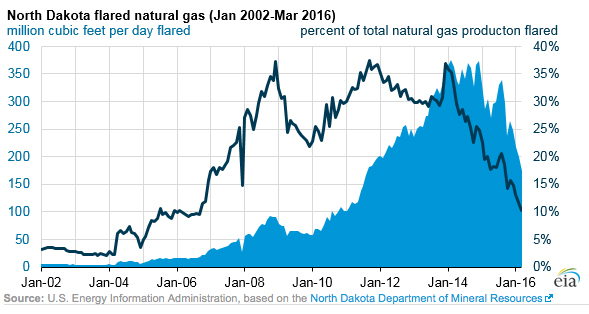 The latest official state data show that 89 percent of North Dakota natural gas has been captured in 2017, and a new restriction will require 95 percent to be captured by 2020.
This new World Bank data is also in line with the latest EPA data show that U.S. methane emissions from venting and flaring have plummeted 77 percent since 2011 at the same time oil production has increased 67 percent. In fact, the EPA’s latest Greenhouse Gas Inventory notes,

Notably, Energy Intelligence reports that worldwide flaring has gone up every year since 2011 at the same time the U.S. has seen dramatic reductions. The report notes Iran and Russia saw the biggest increase in flaring use in 2016,

“Iran, the world’s third biggest flarer, burned about 16.4Bcm, up 4.3 Bcm from 2015. The rise reflects a bounce back in oil production following the lifting of nuclear related sanctions one year ago, and the startup of some new heavy oil developments west of Karun in the southwest. Russia, which retained its unwanted accolade of world’s No. 1 flarer, saw a 2.9 Bcm rise to around 24 Bcm, following a 1.5 Bcm increase in 2014. Russia still burns off around a quarter of its associated gas despite the official goal of increasing gas utilization to 95% by the start of 2012.”

It is important to note that flaring is an important safety measure that follows a highly regulated, closely managed process used as a means of converting methane into CO2 and water, in turn producing far less emissions than venting the methane into the air. That said, eliminating flaring altogether — as the BLM rule would essentially do — would essentially ban oil and gas development on public land, which would be devastating for states such as North Dakota, Colorado, Wyoming and New Mexico.

Even though flaring is an essential component of oil and gas development, industry — contrary to activist claims — has no interest in using flaring any more than is absolutely necessary. As this new World Bank data shows, continued infrastructure investment allowing associated natural gas production from oil development to be brought to market will allow the U.S. to not only continue leading the world in oil production, but continue leading worldwide efforts to limit flaring as much as possible. This is an ideal alternative to the misguided BLM venting and flaring rule that would prove devastating to the economies of western states with considerable production on public lands.