With a war in Europe, economies recovering from COVID-19, and an ongoing global energy crisis, the U.S. oil and natural gas industry met the moment in 2022, increasing production to record highs to meet the demand of American consumers and businesses, as well as our allies abroad.

As 2022 comes to an end, here are a few highlights from this year:

In 2022, U.S. natural gas production climbed and then surpassed monthly records set in 2019 prior to the pandemic, averaging more than 100 billion cubic feet per day in both October and November. The rise in production was driven by the Permian and the Haynesville regions, which was made possible by recent pipeline infrastructure upgrades.

U.S. crude oil production is on the way to surpassing pre-Covid levels in 2023, according to the U.S. Energy Information Administration’s December Short-Term Energy Outlook:

Crude oil production in the Permian Basin reached an estimated 5.5 million b/d in December, a new record, and EIA forecasts Permian production will continue rising to kick of 2023. 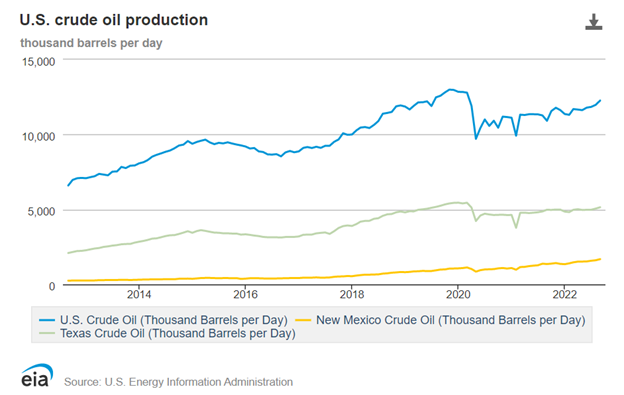 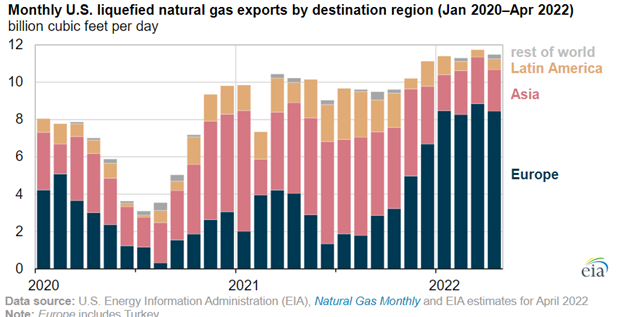 Throughout the year, as Europe searched for alternatives to Russian energy, demand for U.S. crude oil and petroleum derivatives increased significantly, as well. According to the EIA, U.S. exports of crude oil, finished motor gasoline, and distillate have all increased since the beginning of 2022 and in May, U.S. exports of crude oil and petroleum products reached a record of 9.8 million barrels. 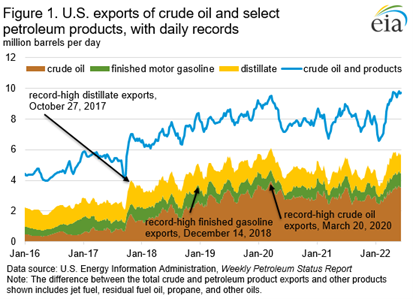 The EIA 2022 Annual Energy Outlook forecasts that while the renewable energy market grows steadily, oil and natural gas will remain the two most-consumed energy sources in the United  States, driven by increasing population growth and economic development. From EIA:

“We project that U.S. energy consumption will continue to grow through 2050 as population and economic growth outpace energy efficiency gains. Petroleum and other liquids will remain the most-consumed category of fuels through 2050 in the AEO2022 Reference case.” 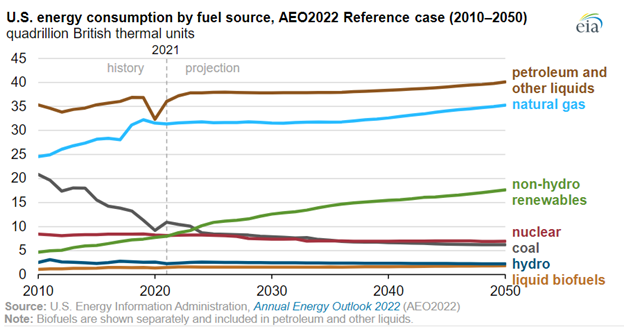 The 2022 Environmental Partnership annual report demonstrates the industry’s continued commitment to deliver the world’s energy while simultaneously reducing emissions from this process.  Not only have participating companies – representing 70 percent of U.S. onshore oil and natural gas companies – increased leak detection efforts, replaced equipment and reduced leak occurrence rates 0.05 percent at approximately 100,000 sites surveyed, but in 2021 these companies cut flaring intensity nearly in half.

“In 2021, There was a 40 percent increase in the number of participating companies in the flare management programs. These companies represent 62 percent and 40 percent of total U.S. oil and natural gas production, respectively. Including new company participants, there was a 45 percent reduction in flare intensity and a 26 percent reduction in total flare volumes from the previous year.” (emphasis added) 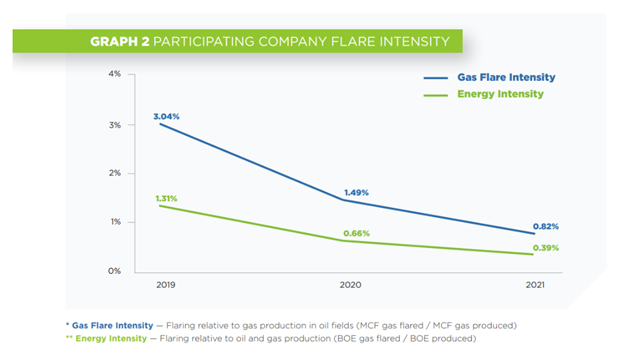 And this is just one example of the commitments being met by companies across the supply chain.

Bottom Line: By delivering energy security to Europe at its time of greatest need, the American oil and natural gas industry once again demonstrated that it is a vital pillar of the world’s energy system. It continued setting production records this year despite the slowdowns brought on by the pandemic and other external pressures experienced over the previous two years, and is doing it cleaner than ever. Once again, 2022 proved that oil and gas is and will remain a reliable and secure energy source for many years ahead.