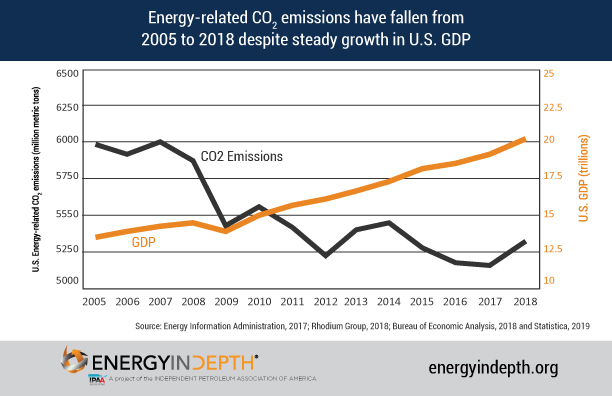 A recent report indicating a potential one-year increase in 2018 U.S. energy-related carbon emissions requires some context to consider whether there’s any cause for alarm.

Based on a few long-term trends – along with the authors’ own statement that “we don’t expect a repeat of 2018 this coming year” – the answer appears to be “no.” CO2 emissions from the energy sector have still fallen 11 percent from their 2005 peak, despite sizable and dramatic increases in oil and natural gas production, population, the number of vehicles on the road and the nation’s GDP.

This includes an estimated 34 million metric ton (MMmt) increase in emissions from electricity generation. But here’s a critical detail: the switch to natural gas is responsible for 61 percent of the total 3.86 billion metric tons of electric generation CO2 reductions from 2005 to 2017, according to EIA. In other words, a 34 MMmt increase is less than 1 percent of the total reductions that have occurred in this sector since 2005.

Additional ways 2018 compared to 2005 – the starting year for emissions reductions goals set by the Paris Agreement – are available in the full blog post on EIDClimate.org and in the EID infographics library.