A new report by researchers from Duke University has triggered some unnecessarily alarmist media reports. Popular Science, for example, ran a story under the headline “New fracking wells are using hundreds of times more water than their predecessors.” While headlines about the report are alarmist, most media accounts fail to put the data into context or note the cause of the increase in water use.

Though it’s true that today’s horizontal wells use more water than their predecessors they also produce significantly more energy. Record-breaking energy, in fact.

And despite the alarmist headlines,  the data still confirm that water usage from oil and natural gas development amounts to a remarkably small percentage overall usage.

The Duke report stresses the increase in the amount of water used per well from 2011 to 2016 — years when the U.S. was producing much more per well — across six different shale plays.

One way that producers have increased output in each well is use of horizontal laterals significantly longer than those used in the earlier years of shale development. The increase in length allows for a single well to extract more oil or natural gas while minimizing surface impact.

Naturally, the longer the lateral, the more water is required to hydraulically fracture the well. This is something the authors of the Duke study clearly acknowledge at the onset of their report:

“Over the period of 2011–2016, the median length of lateral section of horizontal wells also increased, most likely due to technological development and economic considerations to increase the extraction yields from individual wells. We show below that the hydrocarbon extraction intensity has similarly increased during this period. Parallel to the increase in lateral lengths of the horizontal wells and hydrocarbon extraction yields through time, the water use has also increased.”

This is a decade-long trend also highlighted by the Energy Information Administration (EIA) in a report released this spring:

“The average new well in each DPR region in 2017 produced more oil than wells drilled in previous years in those same regions, a trend that has persisted for nearly ten consecutive years. More effective drilling techniques, including the increasing prevalence of hydraulic fracturing and horizontal drilling, have helped to increase these initial production rates. In particular, the injection of more proppant during the hydraulic fracturing process and the ability to drill longer horizontal components (also known as laterals) have improved well productivity.”

The Duke authors also confirm that the amount of water used by the oil and gas industry is negligible in comparison to other industrial uses for water.

However, they authors still single-out the industry in a hypothetical scenario that, at some point in the future, water used specifically for the purpose of hydraulic fracturing could cause conflict in areas with “arid” conditions.

One such arid region is the booming Permian Basin. Unsurprisingly, the report expends a significant portion of its word count on Texas’ great natural resource.

“Concern is especially high in semiarid regions where water withdrawals for hydraulic fracturing can account for a significant portion of consumptive water use within a given region, even contributing to groundwater resource depletion.”

The report finds that water usage in the Permian has increased 770 percent, and that figure that sounds alarming and has, unfortunately, been used in the media to describe the increase in water usage industry-wide as opposed to being specific to the Permian. The vague wording of the accompanying press release did nothing to help curb that impression.

Here again, just as the use of longer laterals increased production elsewhere, operators in the Permian adjusted their recovery techniques and as a result are producing more energy, according to the EIA.

As is the case nationwide, more water is used for irrigation than anything else. The Bureau of Economic Geology noted that in Texas “[w]ater use for shale-gas production is relatively minor (<1%) when compared to that for mostly consumptive irrigation (56%) and municipal (26%) water use in Texas in recent years.”

Not unwittingly, media coverage – and the accompanying press release – downplay the good news coming from the Marcellus Shale, where the researchers found the lowest percentage increase. As the report notes, water usage in development of the country’s largest natural gas play has grown by 25 percent, roughly the same pace as production has increased as a result of using longer laterals and flowback water recycling. During this same time frame, natural gas production in the state increased exponentially, as State Impact reports:

“The Duke study is in line with one by Pennsylvania State University in 2015 showing that fracked wells in Pennsylvania used about three times as much water in 2014 than they did in 2009 as drilled laterals extended to an average of 7,000 feet from 2,200 feet.”

As a result of these longer laterals, the wells produced about three times as much gas as before, co-author Dave Yoxtheimer explained to State Impact. He also noted the “roughly ten-fold increase in gas production in the Appalachian Basin since 2010.”

Likewise, EIA data confirms the rise in natural gas production from the Marcellus in the timeframe posed by the Duke study: 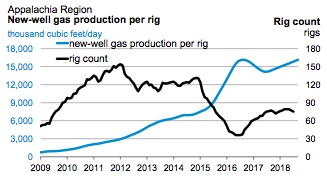 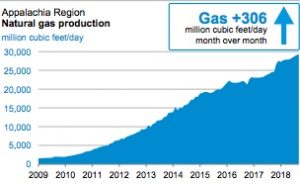 Activists and some in the media continuously attempt to paint the oil and natural gas industry as gluttons for water. Reporting on the Duke study mirrors the previous attempts, but the fact remains that the oil and gas industry is using but a small fraction of the nation’s water supply as it produces an energy abundance thought to be impossible even 15 years ago. In fact, the same Duke research team released a study in 2015 that found fracking accounts for just 0.04 percent of total U.S. freshwater use

While we will undoubtedly continue to see reports like this packaged and presented in a way that sound unique and alarming, the fact remains the oil and natural gas industry is continuing to lift America’s economy and its workforce, reduce energy costs for consumers and businesses, and provide long-sought energy security – all while remaining good stewards of the environment.