Partnership for Policy Integrity (PPI) is out with yet another failed attempt to resurrect talking points about fracking fluid chemical disclosure. And PPI’s latest activist-funded report, which analyzes Pennsylvania well reports on FracFocus.org from 2013 to 2017, is boldly clear in its primary agenda:

“The Delaware River Basin Commission should ban fracking and importation of fracking wastewater treatment and discharge in the basin.” (emphasis added)

Further, in a press conference about the report, author Dusty Horwitt presented its findings alongside the anti-fracking Delaware RiverKeeper and Sierra Club. As local media reported, the purpose of the press conference was to urge New Jersey Gov. Phil Murphy to vote for a full ban on fracking and the receipt of wastewater from shale operations in the Delaware River Basin. As was the case with his report, Horwitt didn’t mince words when discussing his agenda,

“The widespread use of secret chemicals — many of them potentially dangerous — is powerful evidence for the need to prohibit fracking and related activities in the Delaware River Basin.’’

This isn’t entirely surprising given that prior to his role at PPI, Horwitt served as a representative for anti-fracking groups like the Environmental Working Group and Earthworks, the latter which has actually declared a “war on fracking.”

Like Horwitt’s previously flawed research, PPI’s latest report is nothing more than a scare tactic aimed at trying to move the needle on his clearly biased agenda. Here’s some of the most egregious issues with the report.

Howitt’s report attempts to incite public fear over the notion that no one knows the chemicals being used on a well site – and that simply isn’t the case. Even when a company labels an additive as being a proprietary trade secret on FracFocus.org, that does not mean the ingredient is not known to key parties like the U.S. Environmental Protection Agency (EPA) and the Pa. Department of Environmental Protection (DEP).

This is even something Horwitt’s acknowledges in the report, stating,

“[W]hen well operators designate fracking chemicals as trade secrets in required disclosures to the DEP, they must reveal the confidential CAS numbers to the DEP…”

Further, the federal Community Right-to-Know Act requires operators and chemical manufacturers to submit and regularly update detailed Safety Data Sheets (formally known as Material Safety Data Sheets) and provide them to first responders and other emergency personnel in the event of an incident.

Fracking fluid compositions, while not all exactly the same, are typically pretty similar: roughly 95 percent water, four percent sand and one percent chemical additives that the EPA keeps detailed information on. In other words, the information is available to those that would need to have it. The information is just publicly protected to enable competitiveness between businesses – a common practice across industries.

Perhaps even more important is the fact that regardless of what additives are being used for fracking or drilling – Pennsylvania residents are not being exposed to them at any significant level, if at all. And that’s not an oil and gas industry tagline, it’s a scientific fact.

As EID noted the last time Horwitt’s research received some media attention from NPR, Illinois-based environmental engineer Gerald Quindry has a list of guidelines to determine if a chemical poses a concern due to toxicity:

Horwitt’s claims that fracking is harmful to populations near shale development simply don’t stand up to scientific scrutiny. In fact, in DEP’s recently released annual oil and gas report, the agency clearly stated, “… there is no evidence that hydraulic fracturing has resulted in a direct impact to a water supply in Pennsylvania.” Translation: There’s no evidence of exposure pathways for these chemicals to be entering water supplies.

Even Michael Greenstone, co-author of the flawed study released late last year that linked fracking to low birth weight in Pennsylvania, stated in a recent University of Chicago fracking debate that there is little evidence that exposure to fracking fluids is affecting human health:

“When you read the news media, it’s ‘Oh the fluids are probably getting into the water one way or another and that’s going to just affect people in a big radius.’ It’s just not in the data.”

Daniel Raimi, a Senior Research Associate at environmental think tank Resources for the Future, also writes about this subject extensively in his recently released book “The Fracking Debate,” emphasizing the importance of context on exposure to fracking fluids to the broad debate:

“Instead of asking whether fracking chemicals cause harm in large doses, we instead should ask: are humans being exposed to fracking chemicals in quantities sufficient to cause harm? A close look suggests the answer is probably no. The main reason that health damage is unlikely is that, while some fracking chemicals can be harmful if encountered in large quantities over long periods of time, the likelihood of people who live in fracking areas coming into this type of contact is extremely small. To date, there is no research that indicates that the health of people living near oil and gas wells has been — or is likely to be — harmed by exposure to the chemicals mixed in with fracking fluid.”

And Horwitt’s attempt to prove that these pathways do exist falls short as well:

“However, poor installation and cracks in the casing or cement can occur that allow oil and gas chemicals to pollute groundwater.”

The reality is that while well integrity issues have been linked to a small number of instances of methane migration, as DEP’s annual report explained, there are none showing that the chemicals used during hydraulic fracturing have migrated into water supplies.

More so, another DEP report published in April that specifically analyzed the integrity of Pennsylvania’s shale wells found that “less than 1 percent of operator observations indicated the types of integrity problems, such as gas outside surface casing, that could allow gas to move beyond the well footprint.” That DEP report actually found shale operations to be protective of groundwater, noting that “the majority of wells in the state are being operated in a manner that greatly reduces the risk for groundwater impacts.”

Fact #3: There’s no reasonable justification for a fracking ban in the Delaware River Basin.

Whether it be the neighboring Susquehanna River Basin Commission (SRBC) releasing reports finding “no discernable impacts” from the thousands of shale wells in that basin, DEP Secretary Patrick McDonnell testifying to the fact that when it comes to fracking, “what we’ve seen in the studies that we’ve seen are; it has been fine on the SRBC side,” or the Pa. Department of Conservation and Natural Resources (DCNR) determining that fracking has “not raised significant concerns on state forest headwater streams to date,” despite 85 percent of the streams in the core forest area being designated as Exceptional Value or High Quality – none of the claims by the activists that Horwitt has aligned himself with have been able to demonstrate a justifiable reason to ban fracking in the DRB.

There are a multitude of studies demonstrating this – including four released since 2017 in the Appalachian Basin – and this latest PPI report is no exception to this fact. 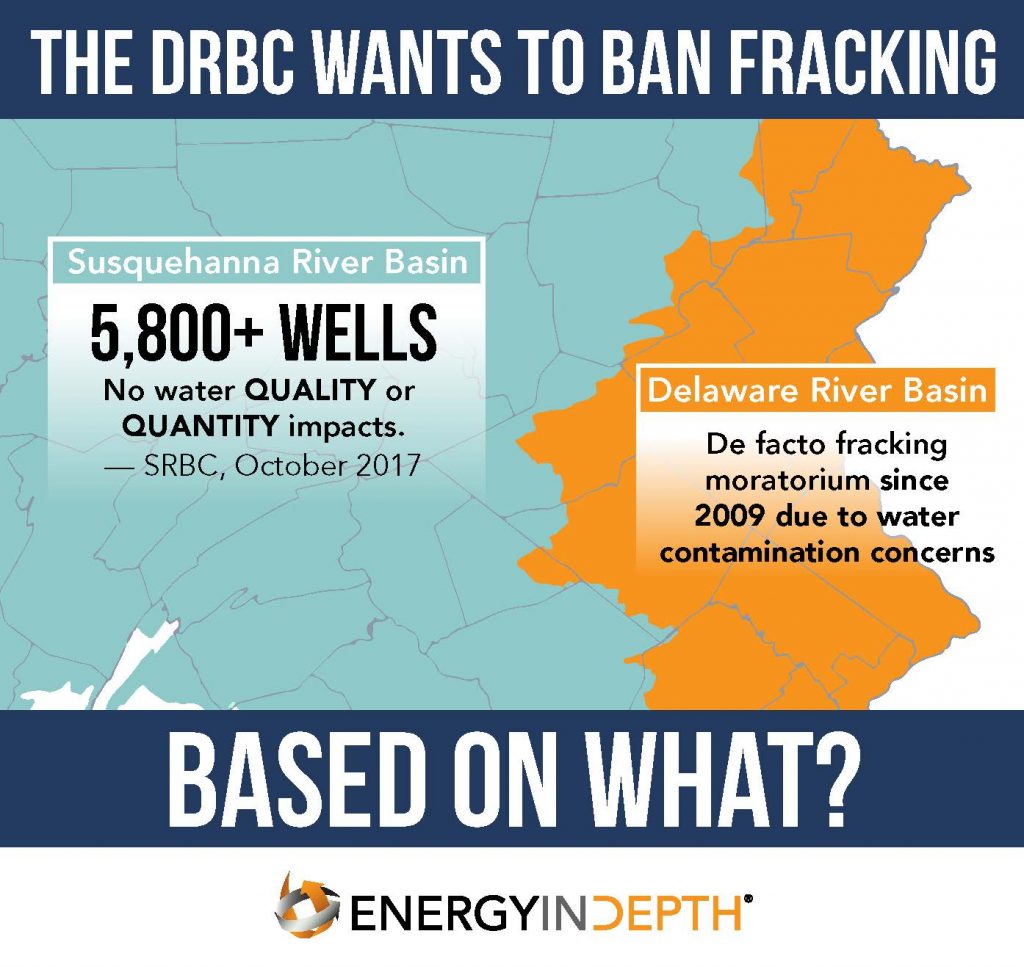