Bakken Business: How North Dakota Survived – and Thrived – Through the Great Recession

A new Brookings Institution report analyzes the economic conditions of the 19 different states comprising the “Heartland” of America, and, not surprisingly, oil and gas production was highlighted as a driving force in these state’s economies. Garnering the greatest gains is North Dakota, the “newest U.S. economic hotspot,” according to Axios.

The aptly-titled State of the Heartland Factbook 2018 focuses specifically on the region’s economic circumstances since 2010, throughout the course of the recession and recovery through 2017. The Heartland – which reportedly generates 30 percent of the nation’s energy – has been led by North Dakota and its rise as an economic powerhouse and regional stabilizer due to the continued development of its oil resources, primarily in the Bakken Shale.

The Peace Garden State has seen remarkable economic gains from development in the Bakken, leading to a dramatic uptick in a number of economic indicators, including wage growth, output, gross domestic product (GDP), GDP per capita and jobs.

Of course, the first economic variable taken into consideration when analyzing the state of the economy is the most obvious: jobs. Nationwide, the country suffered through a period of considerable hardship related to job losses early in the decade across a myriad of sectors – it was not unique to any trade or region, though some industries and states suffered worse than others.

Thankfully, North Dakota is home to a robust oil and gas industry that continues to develop its vast shale reserves, making the state an outlier in both regional, and national economic trends.

“While job growth has been healthy in recent years, on a longer timeline, the Heartland has struggled compared to the rest of the country. From 2001 to 2017 the Heartland added fewer than 1.3 million jobs, for an annual growth rate of 0.2 percent, compared to nearly the 11 million jobs added in the rest of the country, a 0.8 percent annual growth rate.

“Overall, most individual Heartland states have seen slow job growth since 2001. North Dakota was the exception to this trend, leading the nation with annual job growth of 2 percent since 2001, largely driven by the state’s oil and gas boom.” 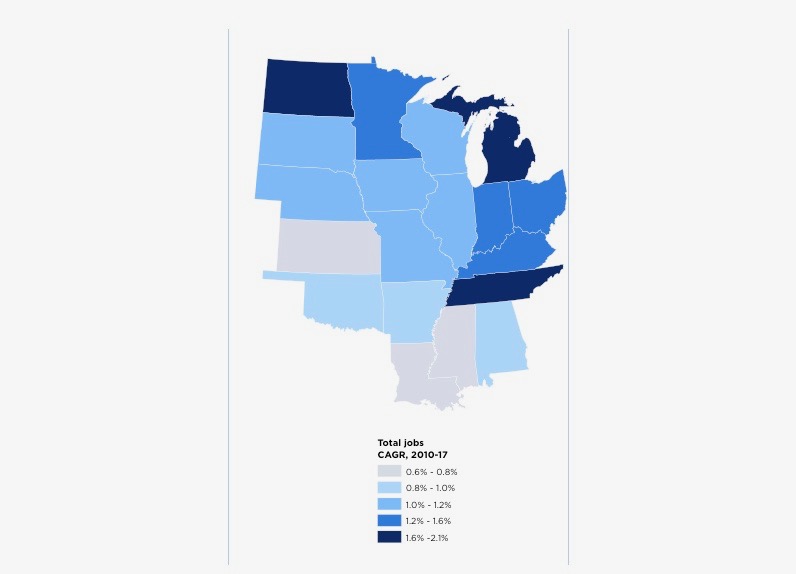 The standard of economic output, gross domestic product (GDP) — measuring the total value of the goods and services produced in a region, including wages and profits – is also shown to be growing at a substantially higher rate in North Dakota than other states in the Heartland. In fact, due to the proliferation of the oil and gas industry – and the well-paying jobs it provides (more on that below) – the study found the state leading the nation in growth.

“As to output growth, North Dakota has seen the fastest economic growth in the Heartland, and the nation as a whole, with the real annual growth of 5 percent since 2010, largely due to the rapid growth of the state’s energy sector driven by the spread of hydraulic fracturing.”

For comparison, North Dakota’s growth rate is more than double that of Tennessee, which ranks second in the region and fifth in the nation in output growth at 2.4 percent annually.

The report notes that, “To the extent a region or a state is productive, it is more likely to prosper.”

In a bit of good news for middle-America, productivity in the region – defined as output by job – grew at 0.08 percent, compared to the “non-Heartland” average of -0.05 during the recession. The Peace Garden State again led the region in productivity measurement at a rate of 2.4 percent – more than the next two highest producing states combined.

Even as the industry experienced a downturn for a period, the Bakken behemoth drove productivity increases in both the industry itself, and those that support it:

“North Dakota was the one exception where the fracking revolution juiced productivity growth, with energy both directly growing productivity at a rate of 0.2 percent annually, as well as having spillover effects into other industries.”

Productivity has a direct association with the value of workers’ labor. It’s no surprise then with the increase in productivity, North Dakota likewise led the region – and the nation – in wage growth, with 2.3 percent annual wage growth and 2.4 percent real hourly wage growth.

Counter to a common misconception that these jobs are filled by out-of-state workers, the data on employment-to-population ratio (the share of individuals ages 20 to 64 currently employed), sits at an astonishing 80.9 percent. This would indicate the demand for skilled workers is high. And high demand on the employer side is always of benefit to the employee. 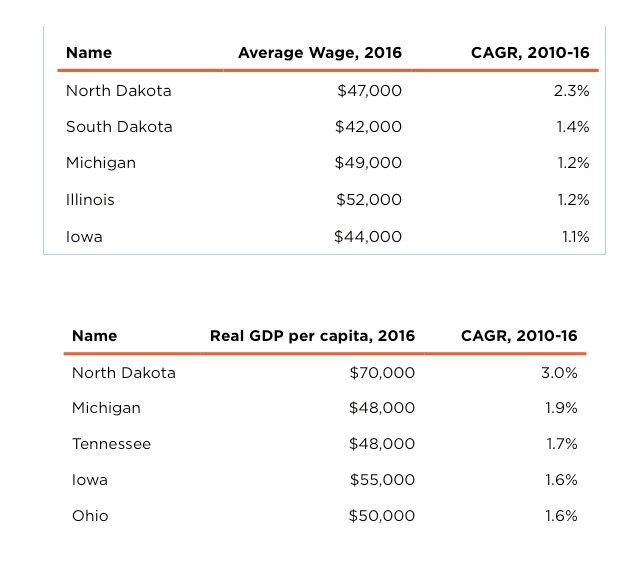 Oil and gas development has a multiplier effect on the economy, something the Brookings Institution considered in its analysis. Energy is categorized here as a “tradable industry” and recognized as one that is “a significant source of prosperity, both as an export-oriented industry sector and as an input for nearly every other good and service in the economy” in the report.

As Congressman Kevin Cramer (R-At-Large) shared with EID, this input has created jobs in sectors far beyond the oilfields.

“In addition to the vast number of skilled workers within the oil companies operating in the Bakken, we also have hundreds and hundreds of contractors and subcontractors working and consuming goods and services in the state creating positive growth in retail trade,” said Rep. Cramer.

As the Heartland report shows, the economic gains brought by the industry did more than help North Dakota survive, it actually allowed the state’s economy to thrive throughout the recession. This growth also benefited the state by preventing depletion of the state’s coffers, allowing for continuation of government services. “The royalties, taxes and other revenues from the industry represent a very significant portion of support for our state and local governments,” said Cramer.

While the national economy suffered through the recession, and the oil and gas industry experienced its own momentary downturn in 2015 and 2016, North Dakota weathered the storm, and current trends show development in the Bakken is ramping up in a time of prosperity in the state.

As the NGI piece indicates, the number of fracking crews active in the Bakken show there’s no sign of development slowing down. That’s good news for the state and its economy.

“We continue to set oil and natural gas production records here in North Dakota which contributes to the vibrant economy we enjoy,” Rep. Cramer added.

As the Congressman stated, while development in North Dakota continues, the U.S. will continue to benefit alongside the state. Much like it helped the region stay on the path to prosperity over the years, it will likewise allow for the country to continue unimpeded on its path to energy security.

“There is no doubt, our energy industry in North Dakota is at the forefront of the resurgence of American energy dominance.”