California’s war against oil and natural gas use is disrupting consumers’ pocketbooks and undermining businesses across the state. The result is that California state is facing a shortage of reliable, affordable energy when it needs it the most.

As California closes the door on its own domestic energy resources, a working paper from the University of California, Berkley highlights the true cost of mandated electrification policies as one that residents simply cannot afford and the California Restaurant Association is standing strong against these ill-considered policies.

Restaurants and the Natural Gas Bans

After the city of Berkley banned natural gas hookups in new construction, the California Restaurant Association launched a lawsuit that it said was, creating “uniquely negative impacts” on the culinary community. The lawsuit states:

“Many restaurants will be faced with the inability to make many of their products which require the use of specialized gas appliances to prepare, including for example flame-seared meats, charred vegetables, or the use of intense heat from a flame under a wok. Indeed, restaurants specializing in ethnic foods so prized in the Bay Area will be unable to prepare many of their specialties without natural gas.”

Although this trend started in Berkley, the suit is meant to protect restaurateurs all over the state. A proposed natural gas ban in Sacramento received negative feedback and raised concern among Asian cuisine restauranters:

Louie, who owned a Chinese restaurant for nearly 30 years, says he hopes a new innovation center could test electric cooking replacements before the ordinance is fully implemented.

“We’re going to ask our businesses to invest in a technology that hasn’t been proven,” Louie said.

Fiona Duong went from serving 400-person banquets at her Happy Garden Restaurant to surviving on take-out business during the pandemic. She says high-temperature, flash-frying wok techniques cook quickly and in volume, which is not possible with electric stoves.

“I believe that there is no equipment that can replace my wok…Time efficiency and energy efficiency is created just because of the fact that we are able to use gas,” Duong said.

As the economy springs back to life after COVID-19 pandemic, banning natural gas in the restaurant and the food service industries could risk hampering their recovery. The pandemic resulted in nearly a third of California’s restaurants permanently closing and nearly a million employees being furloughed or laid off, according to the California Restaurant Association. Restaurant employment is still down one-quarter from before the pandemic. Attempts to electrify everything will only hurt the food industry’s post-COVID recovery.

While some cities and counties including Fairfax County and San Jose have exempted restaurants, the implications of a natural gas bans goes beyond just restaurateurs and affects all communities, both inside and outside of any municipality’s jurisdiction.  A University of California Berkeley working paper published by the Haas Energy Institute shows that large departures from the natural gas grid would raise prices in a utility’s service area with disproportionate impacts on lower-income and black communities.

Authors of the working paper, Who Will Pay for Legacy Utility Costs, found that a utility can expect a $152 loss for every customer departure from the grid, which would be reflected in higher prices for the remaining residents.

In California, where electricity costs 60 percent more than the U.S. average and poverty rates are the highest in the nation, California residents cannot afford the switch to electricity or bear the cost of higher natural gas prices.

“If the gas delivery system’s footprint remains static while throughput declines, the shrinking base of gas customers will ultimately face higher rates and unaffordable gas bills. These rate increases will particularly impact those who are already experiencing a disproportionate energy burden and unable to afford a transition to clean heating fuels.”

The average median household income of the 40+ cities in California that have passed a reach code banning future use of natural gas appliances totals over $110,000 – over 60 percent more than the California average. These cities represent the first movers and individuals who can afford higher electricity, but their departure leaves legacy infrastructure costs of the service area to those of lesser means.

In addition to banning on residential and commercial natural gas use, California is also trying to sideline all traditional energy production and consumption to the detriment of their residents.

Last summer, the closure of natural gas power plant facilities and a record heat wave caused rolling outages for the first time in nearly 20 years. And this year’s flex alerts have kept the grid hovering at the edge of more rolling blackouts as the state faces another heat wave and a hot summer.

To add insult to injury, the state is caught in a negative feedback loop in which the constrained energy supply constrained leaves residents increasingly reliant on energy imports from neighboring states and successive renewable energy mandates further limits the supply of reliable power causing higher electricity prices. According to electrification expert Robert Bryce:

“In 2020, California’s electricity prices increased by 7.5 percent, making it the biggest price increase of any state in the country last year and nearly seven times the increase that was seen in the United States as a whole.”

The state has even doubled down on this strategy by denying 21 fracking permits last week. The failure to develop domestic energy is ensuring that the energy the state does consume is produced outside its borders. In the case of crude oil, the state is consuming roughly the same amount of the fuel, but it is increasingly arriving from overseas and from nations with significantly less stringent environmental regulations on oil production activities compared to U.S. standards. 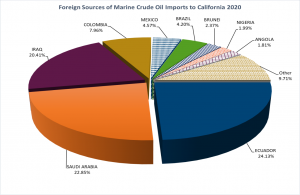 As a whole, the Golden State isn’t lowering its consumption of traditional energy, it’s just shifting the source of where that energy is produced.

Californian policy leaders are selling their residents and businesses on short-sighted energy goals that threaten to devastate their budgets, keep homes dark, and hamper businesses. The state’s local natural gas bans are threatening energy reliability for local restaurants, harming lower income earners in their jurisdictions and threatening others across the state with higher energy prices, too. If California continues to sideline domestic energy production, prices will continue to rise and the state will increase its reliance on foreign imports.