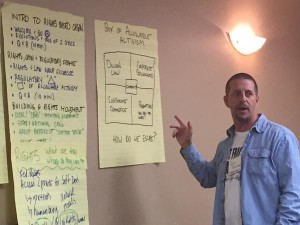 A new report from the “Stop the Frack Attack Summit” recently held in Denver implies that activists behind the Colorado Community Rights Network have adopted the same extreme position on bankrupting communities that has been espoused by the campaign’s parent organization, the Pennsylvania-based Community Environmental Legal Defense Fund (CELDF).

Reporting on what appears to be a discussion at the summit on the high costs of litigation paid by communities that have adopted similar so-called “Bill of Rights” measures , the Colorado Independent reports that Cliff Willmeng, sponsor of the amendment and candidate for Lafayette City Council, said the cost of fracking outweighs the cost of lawsuits. From the Colorado Independent:

“We won’t save the planet casualty-free,” said Cliff Willmeng of the Colorado Community Rights Network, the amendment’s sponsor.

Willmeng, who is now running for Lafayette City Council, said the cost of fracking outweighs the cost of lawsuits.”

Willmeng’s comments are similar to those made by CELDF founder Thomas Linzey earlier this year. Often challenged in court, as was the case in Lafayette, CELDF’s efforts have a history of leaving communities holding the tab for high legal bills. When questioned about the impacts on communities, Linzey told Reuters that bankrupting a community might be “exactly what is needed.” Reuters reports:

Reports show that “The city of Lafayette, Colorado, has already paid some $60,000 so far defending its 2013 CELDF-authored community bill of rights in court, knowing the effort is a form of legal disobedience with little hope of yielding a courtroom win.” And a similar story is unfolding in other communities as well. But the most well-known case occurred in Mora County, New Mexico where county commissioners repealed their community rights amendment in the face of rising legal bills. From Reuters:

“We weren’t comfortable using our county as the test case to try to overturn two centuries of law,” said Mora County Commissioner Paula Garcia. In Grant Township, residents so far have remained willing to fight. The community has spent just a few thousand dollars of its annual $250,000 budget defending its CELDF-drafted community bill of rights. But it may have to spend more.”

The questionable legality of the amendment is just one reason why economic development and business groups quickly denounced the Colorado campaign when it was launched. But the effort has also come under fire from state attorneys who have raised serious legal issues with the amendment as part of the process required to put the issue before the state’s voters on the 2016 ballot.

Now, with Willmeng echoing Linzey’s comments in Colorado, it is clear that the CELDF campaign to ban shale development in the state is not just about fracking; it’s a risky proposition by backers who seem to have no regard for the mess they leave for communities and the taxpayers left holding the legal bills.