Anti-fossil fuel activists like 350.org’s Bill McKibben often pretend the United States can run on 100 percent renewable energy without the use of any traditional fuel sources. McKibben recently wrote in Rolling Stone that “the sundown problem is being solved fast, as batteries are able to store the energy from the morning sun and the wind from a gusty evening to keep the power running overnight.”

Because storage technology to allow for solar power to stand alone — even during a brief loss of sunlight — doesn’t currently exist, the solar industry has been actively preparing for how to mitigate the issue in places like sunny California where that industry thrives. The solution? Natural gas.

“To help keep the lights on, the California Independent System Operator will tap the state’s network of gas generators and hydroelectric dams to make up for the loss of about 6 gigawatts of solar output over three hours. Duke Energy Corp. said it will utilize gas generators in North Carolina, the biggest solar state after California, to make up for output that is expected to sink 92 percent to about 200 megawatts in 90 minutes.”

In the article, Steve Krum, a spokesman for First Solar Inc., the largest operator of solar plants in the U.S., explained that events like this are handled similar to a planned outage and routine operations. And Stephen Berberich, the president of California’s grid operator California ISO, told Fortune that natural gas will continue to be an important part of the state’s backup energy supply for renewables:

The solar industry’s realistic approach to the total solar eclipse further confirms that even though wind and solar power are increasingly important elements of the energy portfolio, they are intermittent energy sources cannot thrive without the baseload power provided by at-the-ready fossil fuels. However, this does not mean that natural gas impedes renewable growth, or that the natural gas and renewable industries cannot thrive and work together. Evidence actually points to the opposite.

A 2016 study from the National Bureau of Economic Research (NBER) found that:

And because of this complementary relationship, consumers across America’s energy grid are unlikely to experience issues next Monday when the sun will be totally eclipsed by the moon.

The cooperation between the natural gas and renewable energy industries doesn’t end there.

In addition to natural gas providing a reliable backup fuel source for the wind and solar industries, the construction and operation of these facilities are more similar than most people would think. This was in evidence last week at the Offshore Wind Executive Summit (OWES) in Houston, Texas.

In addition to being the largest producer of oil and gas in America, Texas also produces more wind energy than most countries, and in terms of sheer quantity dominates U.S. renewable production. But that’s not what drew conference attendees to Houston.

The city was a prime location for the summit because as Stephanie Kolodziej, publisher of Renewable Energy World, explained to E&E News:

“It seemed fairly natural to have it here in Houston or at least somewhere on the Gulf. We knew that we really wanted to talk to oil and gas.” (emphasis added)

That’s because according to OWES:

“Using many of the same technologies—design, foundations, vessels, cabling and a highly skilled workforce — offshore oil and gas experts play an important role in the advancement of U.S. offshore wind.”

For oil and gas supply chain companies able to diversify, the wind industry is similar enough to provide a fairly easy transition for working in both industries. 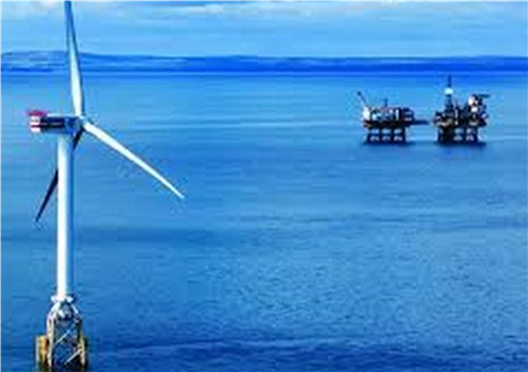 Mike Celata, regional director for the Gulf of Mexico region with the Bureau of Ocean Energy Management (BOEM), told E&E:

“It’s a great forum to bring together those parts — the oil and gas industry and the offshore renewable energy industry,” Celeta said, so investing can occur “in the people, the infrastructure and technologies that will propel the United States as a leader of diversified offshore energy.”

Despite the rhetoric of McKibben and Stanford professor Marc Jacobson — whose 2013 study outlining a “roadmap” for transitioning to 100 percent renewable energy was recently criticized by a group of 21 independent experts for being deeply flawed and infeasible — pragmatic renewable advocates and experts have repeatedly confirmed the reality is that natural gas is an essential backup to intermittent solar and wind energy.

As Scott Tinker, director of the Bureau of Economic Geology at The University of Texas at Austin, recently explained in his contributing piece for Forbes, the “Keep It In The Ground” movement’s core mission is misguided on many levels:

“The ideology being thrust on the public that some energy is good and other energy is bad is cunning. But in reality, keeping 85% of the world’s energy in the ground would jeopardize economic development and hurt environmental-sustainability investments. Mitigation and adaptation to a warming planet will require a lot of energy — all energy. Oil and natural gas — and in places even coal — play a vital role out of the ground as part of a secure energy mix for the foreseeable future.”

That’s why the United States’ continued global leadership in producing all forms of energy is vital. From the increased use of natural gas and renewables in power generation that continue to slash carbon emissions, to the incredible growth in LNG and oil exports and the U.S. manufacturing sector thanks to the abundance of shale oil and gas, Americans prove that when it comes to energy, it is not an either/or scenario. As preparations for the coming total solar eclipse illustrate, traditional fuel sources continue to be complementary and necessary to a growing and increasingly important renewables industry. This is just one of the many reasons that activists’ calls to ban fracking are reckless and unfeasible.