The Department of the Interior (DOI) released a report this week that shows public land revenue increased by $400 million from Fiscal Year (FY) 2016 to FY 2017, a trend largely attributable to oil and natural gas development. The report’s press release notes:

As the following graphic from the report shows, energy and mineral development (highlighted in light blue below) represented roughly two-thirds of the total $292 billion in economic output, $165 billion of value added and 1.8 million DOI jobs in FY 2017. 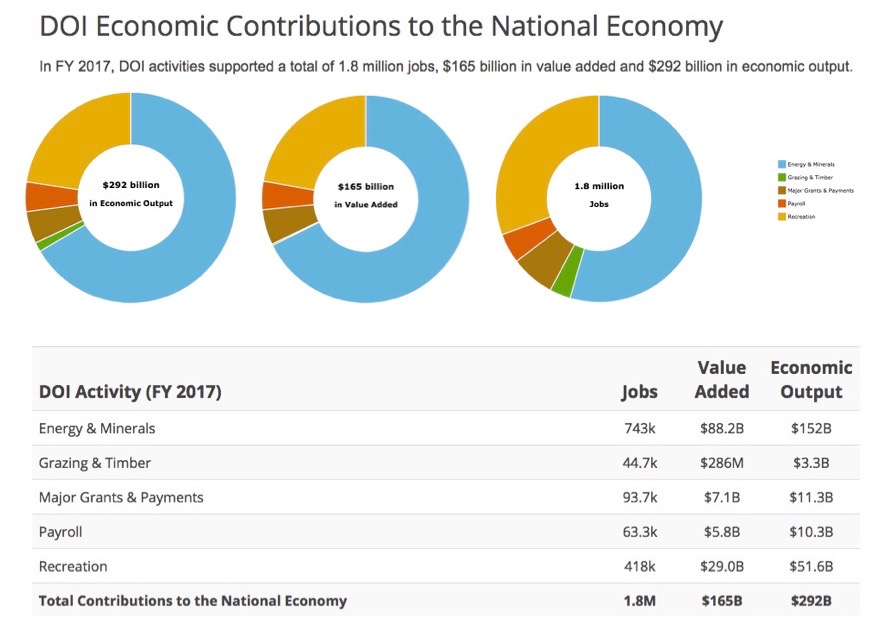 The reports noted that overall DOI jobs were up by more than 230,000 in FY 2017 and overall economic growth increased for the first time “in several years” – trends driven by significant year-over-year increases in energy jobs (+104,370), energy-specific economic output (+ $20 billion) and energy-specific value added (+ $12.3 billion).

Not coincidentally, oil production on federal lands was up 59 million barrels in FY 2017.

“Development of oil and gas wells on Federal and Tribal lands increased substantially between FY 2016 and FY 2017. Nationally the number of onshore wells increased by almost 85% with notable gains in Colorado, New Mexico, Utah, and Wyoming. The increase in activity was likely driven in large part by rebounding oil and gas prices, which increased about 25% over the period. In FY 2017, Federal and Tribal well development supported over 100,000 jobs and $7.8 billion in labor income, and contributed approximately $22.5 billion to National economic output.”

It is also not a coincidence that the report shows that states with the largest upticks in gross domestic product (GDP), economic output and employment all happen to be huge oil and gas states:

The DOI report also shows that royalty payments from energy development and lease sales were up $1 billion in FY 2017. Even more notably, they doubled from that total in FY 2018.

“FY 2018 energy disbursements totaled $8.93 billion, which is an increase of nearly $2 billion since FY 2017 and an increase of $3 billion since President Obama’s last year in office. Production and revenues increased and the Department saw record-breaking sales. The Bureau of Land Management’s third-quarter oil and gas lease sale in New Mexico broke all previous records by grossing nearly $1 billion in bonus bids for 142 parcels. Thanks to Federal energy leases, the State of New Mexico has a nearly $2 billion budget surplus.”

This DOI report is just the latest example of the incredible importance of oil and natural gas development on federal lands in western states. Even the New York Times recently noted:

“Wyoming received $669 million from federal oil, gas and coal sales last year, money it uses to help pay for its schools, roads and other needs.”

It also illustrates why the “Keep It In the Ground” movement’s stated objective of banning oil and gas development on federal lands would be devastating. In 2016, the U.S. Chamber of Commerce released a report as part of its Global Energy Institute’s “Energy Accountability Series” that found that stopping energy development on federal lands would result in a loss of “nearly a quarter of the nation’s current production of coal, oil and natural gas,” more than “$11.3 billion per year in annual royalties and rental fees for federal and state governments,” and a loss of “more than 100,000 direct jobs” and another “280,000 indirect and induced jobs.”

With regard to impacts on Wyoming, New Mexico and Colorado, specifically, the press release for the report notes:

Fortunately, oil and gas development on federal lands is trending upward after years of decline, which is good news for numerous western states moving forward.