It’s been almost two years since President Trump said Ohio got “lucky with a thing called fracking,” and he was correct. As Cleveland State University recently reported, fracking has directly contributed to over $50 billion of investments in the Buckeye State in just a few short years, $38 billion of which was directly attributed to horizontal drilling and hydraulic fracturing upstream spending. Natural gas from the Utica Shale has also led to billions of dollars of investment in pipeline infrastructure projects that support drilling activities.

EID recently reported that these projects — including the $8 billion of natural gas lines in various stages of construction — have led to 4.2 million work hours over a 16-month period for local union labor. And now, new EID research finds these five pipeline projects will cumulatively create over 26,000 jobs through construction of 1,241 miles of natural gas lines. Altogether, they will generate over $1.2 billion in local tax revenues during the first five years the lines are in operation. Moreover, these five projects will move 7.65 billion cubic feet (Bcf) of natural gas per day.

According to the U.S. Energy Information Administration (EIA),  the Utica Shale is currently producing approximately 4 Bcf of natural gas per day and experts believe natural gas production will continue to rise. Therefore, pipeline infrastructure is sorely needed for takeaway capacity. To that end, this report also highlights how delaying these projects could risk thousands of jobs and millions tax revenues for which Ohio communities are anxiously waiting. 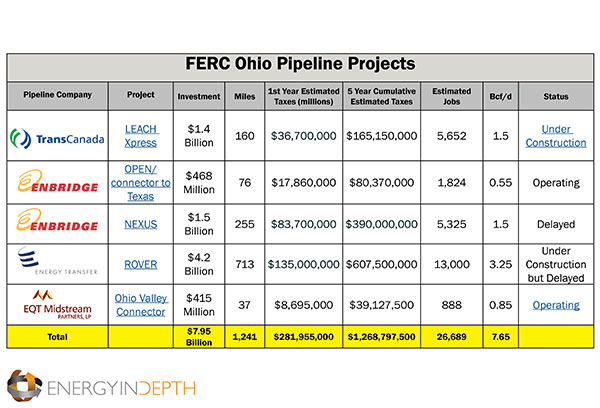 For this analysis, we looked at economic impact studies and public announcements from three Ohio pipeline projects – NEXUS, ROVER, and LEACH Xpress. According to this data, the estimated average tax revenue generated per mile of a pipeline was $248,900. To ensure consistent methodology with our 2015 pipeline analysis, $235,000 in tax revenue generation per mile was assumed for the pipeline projects that have not yet announced tax estimates.

With a standard factor of tax revenue established, the decline in revenue generation over the initial operational period for these projects was then calculated. To calculate this, the NEXUS project was used as a benchmark. According to the economic impact study for the NEXUS project, the estimated annual tax revenue from the project is predicted to decrease by approximately seven percent per year over the first five years. Therefore, we conservatively assumed that a 10 percent reduction from the highs of the first year in service would generate a total tax revenue of $1,268,797,500 cumulatively for the first five years of operations for all five projects.

For the three projects that have made their jobs projections public, an average of approximately 24 construction jobs would be supported by each mile of pipeline infrastructure built.

Unions and Royalty Owners Sound off on Pipeline Delays

Unfortunately, several of these projects have been stalled by bureaucratic minutia at the federal level. The Federal Energy Regulatory Commission (FERC) has lacked a quorum for the past six months, meaning the federal agency with the authority to approve major energy infrastructure projects has been unable to do so. Fortunately, the Senate just confirmed two commissioner appointments, giving the agency the quorum needed to address the significant backlog of projects under consideration throughout the U.S.

In response to the FERC permit approval delays that (thankfully) may soon be ending, Ohio unions, royalty owners and the communities awaiting millions in economic stimulus and tax dollars have sounded off.

Only two of the major five FERC natural gas pipelines traversing through Ohio have been approved by FERC and are currently in operation (OPEN and Ohio Valley Connector) – a good start, but more action is needed. As the graphic above makes clear, the largest lines are experiencing delays. Delaying the approval of these projects impacts thousands of jobs, resulting in millions of work hours lost missing out on millions of dollars in local tax revenues for local schools.

With so much at stake, it’s not surprising that the unions are fighting hard to move these projects forward. Calling on their membership to engage the authorities responsible for the approval and regulation of these projects, union leaders are asking members to submit requests for the expedient permitting of these projects. The Pipeliners Local Union 798, for example, state on their website:

“The country has benefited greatly from the use of our domestic oil and natural gas. These domestic resources have contributed billions of dollars to the national economy and has moved the United States closer to energy independence. Yet, the Nation does not have the necessary pipeline infrastructure to connect its oil and gas production with consuming markets across the nation and beyond. Take action today and join the growing network of energy advocates that understand the need for new pipeline infrastructure.”

Many of the unions associated with pipeline development and construction are also joining with the National Association of Royalty Owners (NARO) on this mission to get these projects approved. NARO members recently sent letters to members of Congress stating:

“With many of our members having a direct interest in the completion of oil and gas projects across the country, there is a necessary awareness that we have in knowing that these projects are being expediently moved from start to finish. With construction of major projects being halted across states, royalty owners are losing the ability to move our product to market. But more importantly, communities are being prevented from reaping the economic and energetic dividends these oil and gas projects will create. Oil and gas companies have continued to act as stewards of the public interest by making strides to better the communities they operate in. Oil and gas projects create large new streams of tax revenue for localities to use for schools and the operation of their governments. Increasing tax revenue also helps maintain and improve local public safety. Furthermore, oil and gas projects bring both temporary and permanent jobs to our local members of labor and our communities, thereby adding millions of dollars to local economies.”

NARO’s words underscore the transportation bottleneck the Appalachian Basin is facing — there is an abundance of natural gas, but not enough pipelines to move it to consumers. It’s clear the problem for Marcellus and Utica shales is not production, but takeaway capacity. This is not only a problem for companies that explore and produce natural gas; it’s a problem for mineral owners as well.

As U.S. Secretary of Energy Rick Perry recently said of natural gas, “You put the supply out there and demand will follow.” To that end, getting these infrastructure projects to the finish line is critical to ensure the enormous supply of Marcellus and Utica shale gas gets “out there.” Only then will the Appalachian Basin reach its enormous potential. Ohio communities, royalty owners and local construction workers depend on it.