A rapid energy shift may have unintended consequences to the grid that U.S. regulators need to take into consideration, according to outgoing Federal Energy Regulatory Commission (FERC) Commissioner Neil Chatterjee.

“It’s crucial that we don’t put ourselves in a position where we are accidentally driving out competitive resources that are needed to maintain reliability. But I fear that’s the direction we are heading.”

Chatterjee also expressed concern over the “villainization of capacity markets, when these clear and obvious trends seem to require us to rely on capacity markets more than ever.”

These comments come on the heels of efforts to ban new natural gas hook ups in states like California and cities like Denver.

More recently, extreme weather events underscore the need for an all the above energy solution that includes natural gas. For instance, California is once again experiencing rolling blackouts as a result of limited energy supply. Residents have been asked to voluntarily reduce electricity use during heat waves to stave off rolling blackouts through the state’s Flex Alert system. Experts have said this method is unsustainable. As Politico recently reported:

“But there is a growing sense that the state is overusing Flex Alert, asking too frequently — and on days when easing air conditioner usage is most uncomfortable. The tool was once used sparingly, just 21 times between 2009 and 2019, but state officials called 10 alerts last year alone, and five so far this summer. By July, residents appeared to show signs of fatigue. Demand did not drop at all on July 9 or 10, despite two Flex Alerts, though it did dip on July 12, when temperatures were slightly cooler.”

In order to see real impacts, California is “going to need more response than we saw [July 9],” according to California Independent System Operator CEO Elliot Mainzer.

In February 2021, when much of Texas was blanketed by historic low temperatures and freezing conditions, residents and businesses used record amounts of natural gas to heat homes and power electricity.

In testimony before the House Energy and Commerce Committee, Railroad Commission of Texas Chair Christi Craddick asserted that data showed 99.95 percent of Texans did not lose residential natural gas service during the storm. That represents some 4.6 million households, or 13 million Texans who were able to maintain critical, life-saving heating during the devastating storm.

Comm. Chatterjee went on to highlight the crucial role of an abundant, affordable natural gas supply as a key driver of low electricity rates across the United States:

“U.S. electricity prices are historically low…because natural gas-fired power plants are able to access the natural abundant affordable supply of natural gas that we are blessed to have in our country.”

A Council of Economic Advisors (CEA) report found that the increase in production made possible by shale and the shale revolution saves Americans $203 billion every year, or $2,500 for a family of four in lower electric bills. CEA estimates that greater productivity has reduced the domestic price of natural gas by 63 percent as of 2018 and led to a 45 percent decrease in the wholesale price of electricity. And direct consumption of natural gas is helping households save on their overall utility bill, keeping food and homes warm at one-third the price of electricity.

Further, the switch to natural gas has helped the U.S. power sector reduce emissions, accounting for much of the decrease in greenhouse gas emissions from the U.S. electric sector in recent years, according to research from the Center for Climate and Energy Solutions. The replacement of fuels like coal has lowered power sector emissions to mid-1980 levels. 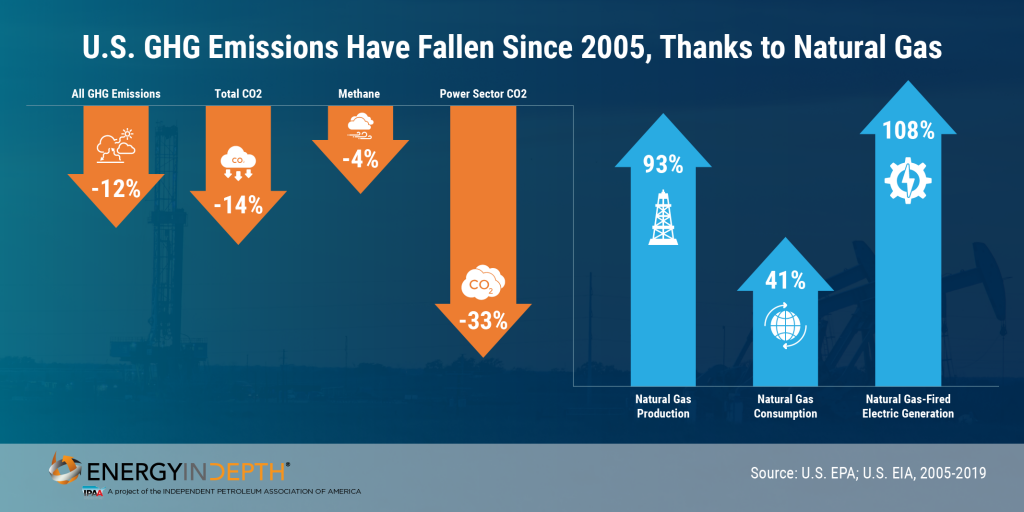 Reliable electricity prices require a predictable commodity market underpinned by a rules-based framework that ensure consumer access and resource availability. As the United States seeks ways to reduce emissions, regulators cannot ignore cost and grid reliability. Any policy that fails to take these two factors into account threatens to set back consumer gains and turn our bright energy future dark.