The Federal Energy Regulatory Commission will discuss electrification and the future U.S. energy grid during a technical conference that should highlight the major role natural gas plays in  lowering emissions from the power sector, serving as the top fuel source for U.S. electricity generation and providing reliable, affordable energy. Yet representatives from the natural gas industry are notably absent from the conference’s participant list.

The importance of natural gas increases as electrification mandates for homes and businesses become more prevalent across the country, growing electricity demand at an accelerated rate. These policies are often positioned as a means to reduce emissions, but that is far from the only factor that needs to be taken into account in any policy discussions about the future of the U.S. electric grid.

Here are a few key questions that need to be addressed during FERC’s conference:

The impacts energy policies have on consumer prices are of real concern. A Department of Energy report last year found that the average cost of residential electricity was nearly three times that of natural gas per million British thermal units.

Similarly, in a study of Columbus, Ohio, the American Gas Association found that forced electrification would cost residential consumers $440 to $630 more in annual energy costs. 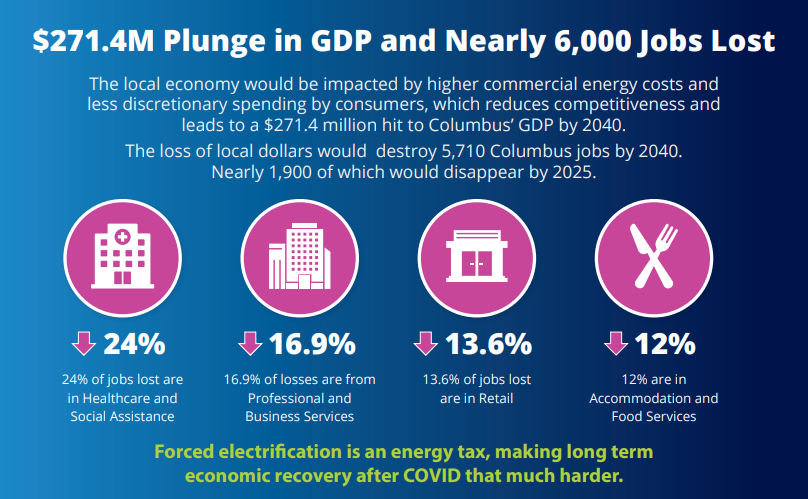 And while consumer costs increase, emissions barely budge. Nationwide, direct residential natural gas use will account for less than 4 percent of total greenhouse gas emissions by 2035. Meeting the increased electrical demand would relocate gas demand to the power sector and reduce emission 1 to 1.5 percent.

Electrifying homes, businesses and vehicles will significantly increase electricity demand, resulting in a greater need for an abundance of reliable fuels for generation. According to the National Energy Renewable Laboratory, increasing the amount of natural gas used for power generation solves half of the  electrification puzzle:

“High electrification drives the accelerated and increased deployment of both renewable energy and natural gas-fired technologies, with incremental deployment beginning in the 2030s. Growth over time is expected for both natural gas and renewable energy across all supply-side assumptions, but these two sources also compete to supply electricity to increasing demands under electrification.”

Excluding natural gas through “keep it in the ground” policies have limited regions like New England from taking full advantage of natural gas power generation, leaving them with higher energy prices and the necessity to use higher emitting fuel to meet peak demand.

The electrical grid is prone to service disruptions during extreme weather events, requiring fuels that can be ramped up quickly to ensure resiliency and reliability.

A 2020 Brattle Group report found that natural gas outperforms other fuel sources in extreme weather events, in part because it “can perform without advance notice for any length of outage.”

Resilience in the gas grid includes over 9.23 trillion cubic feet of total storage capacity to meet any demand. During Texas’ February storm, these vast natural gas reserves allowed for instant power generation and were a reliable resource that kept homes warm throughout the storm.

A failure to plan for resilience can force rolling blackouts to give electrical equipment time to cool during a prolonged heat wave, as California experienced last summer.

The private sector, including the oil and natural gas industry, is investing in and developing innovative technologies to ensure that American energy can be produced, transported and used while lowering U.S. emissions.

“Studies by energy agencies, universities, and the industry that model future U.S. natural gas consumption consistently show continued use of natural gas for at least the next 30 years, even in scenarios where the country achieves net-zero targets by midcentury. There is no quick replacement for gas in the U.S. energy mix.” (emphasis added)

The report goes on to discuss the importance of investing more, not less, in essential infrastructure like pipelines to ensure reliable energy now, but also to have the infrastructure in place for the fuels likely to play a larger role in the future, like hydrogen:

“But retrofitting and otherwise improving the existing pipeline system are not a choice between natural gas and electrification or between fossil fuels and zero-carbon fuels. Rather, these investments in existing infrastructure can support a pathway toward wider storage and delivery of cleaner and increasingly low-carbon gases while lowering the overall cost of the transition and ensuring reliability across the energy system. In the same way that the electric grid allows for increasingly low-carbon electrons to be transported, the natural gas grid should be viewed as a way to enable increasingly low-carbon molecules to be transported.” (emphasis added)

Important discussions like those FERC is facilitating this week cannot ignore the role the shale revolution has played in the energy transition, and natural gas needs to be a part of those discussions. As a recent Berkeley Labs report explained:

“Natural gas generation grew from 761 billion kWh in 2005 to 1,617 billion kWh in 2020. Assuming this growth only displaced coal and considering the relative emissions rates of gas and coal, we estimate that increased natural gas supply reduced 2020 CO2 emissions by 470 MMT or 48 percent of the total emissions reduction since 2005.” (emphasis added)

Perhaps more important is the role natural gas will continue to play as the United States determines the best path forward to build upon the emissions reduction successes seen thus far.