From Energy Scarcity to Energy Dominance: U.S. To Become World’s Top LNG Exporter By Next Year

At the turn of the century – just over two decades ago – the United States had a bleak outlook on domestic natural gas production, with many speculating increased natural gas demand would have to be met with costly imports. But as we close out 2021, the Energy Information Administration is forecasting that America will be the world’s top liquefied natural gas exporter by next year.

What happened in such a short time to take the country from a position of energy scarcity to one of global LNG dominance? One word: Shale.

In 2003, Time ran an article with the headline “Why U.S. Is Running Out of Gas,” that explained:

Since that time abundant natural gas production has enabled U.S. manufacturing to grow, drastically reduced power sector emissions, and allowed the United States to become a net exporter instead of relying on other countries to meet the bulk of our energy needs. It’s also helped ensure a reliable supply of affordable energy for Americans.

The United States became the third largest LNG exporter behind Qatar and Australia in 2020, following a 2019 prediction by EIA that it would surpass the two countries’ export capacity by 2025.

EIA has since bumped up its forecast for when the United States will become the world’s largest LNG exporter to as soon as next year – three years ahead of schedule.

The transition that has occurred in a relatively short time is truly remarkable when you think about it:

The Paris Climate Accord uses 2005 as a baseline for commitments to reduce emissions. In the world of oil and natural gas, it is just one year after Range Resources drilled the first Marcellus Shale well in the Appalachian Basin, taking the shale revolution beyond Texas.

According to the Federal Energy Regulatory Commission, it was also the year natural gas prices reached “historically high levels,” “trading for as much as $16.00 per MMBtu in national production area spot markets during the early fall.”

By 2009, the United States had surpassed Russia as the world’s largest producer of natural gas and conversations began to shift from the need to import to the potential to export U.S. LNG.

The first shipment of U.S. LNG from the lower-48 states was exported from Sabine Pass in February 2016, and as Reuters reported shortly before the shipment left Louisiana:

For perspective on how much of that LNG came out of the lower-48: In 2015 the United States only exported 28.4 bcf of LNG. By 2017, the country became a net natural gas exporter for the first time in 60 years.

By 2019 – just three years after the first LNG shipment left Louisiana – the world could not ignore that the United States would play a major role in transforming global energy markets. As IEA Executive Director Fatih Birol said at the time:

“[B]etween 2005 and 2019 cumulative U.S. CO2 emissions reductions from shifts in electricity generation from coal to natural gas and to non-carbon generation totaled 5,475 MMmt. Of this total, 3,351 MMmt resulted from decreased use of coal and increased use of natural gas.”

Despite the significant increase in both LNG and total natural gas imports since 2016, natural gas spot prices remained fairly consistent, averaging $2.56 at the Henry Hub in 2019. 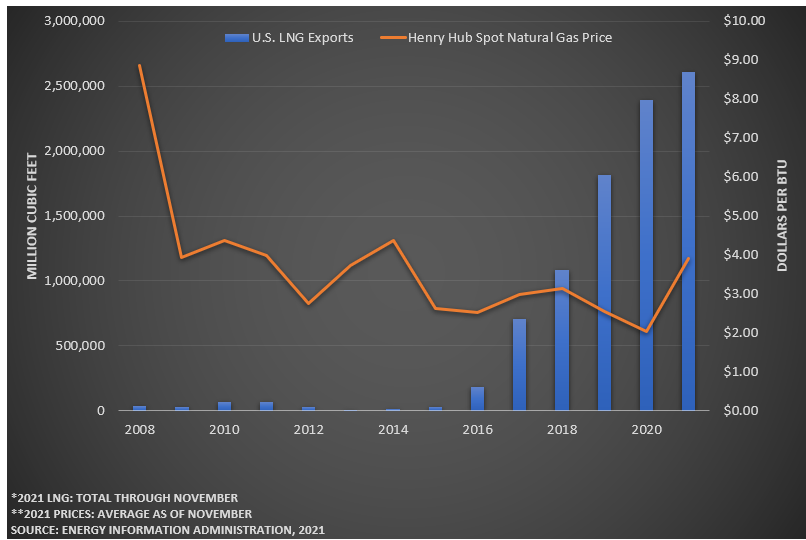 Today and Into the Future

It’s incredible when one really stops to think about how much U.S. and global energy markets have changed since 2016 – and the United States has been at the forefront of accelerating those changes to increase reliability and accessibility, while decreasing costs and emissions.

And given EIA’s recent forecast, it’s going to continue to play a major role in transforming energy markets by providing the world with cleaner, U.S. LNG.