Today, Duke University published a study analyzing oil- and gas-related spill rates in four states,  identifying 6,648 spills reported across Colorado, New Mexico, North Dakota and Pennsylvania from 2005 to 2014. But, much like Duke’s 2016 study of spills in North Dakota, this latest study leaves out some crucial information that is essential to understanding the impact of those numbers.

Before we get into why, it’s worth pointing out briefly that one of the researchers on the team, Kate Konschnik, previously worked for Senator Sheldon Whitehouse (D-R.I.), who was a co-sponsor of the FRAC Act — legislation that would put EPA in control of regulating hydraulic fracturing. Whitehouse is also a huge proponent of activist Bill McKibben and one of the ringleaders of the #ExxonKnew movement. Konschnik also completed a fellowship with Earthjustice and was a former member of the Montgomery County (Md.) Sierra Club’s executive committee. These are two of the most well-known anti-fracking groups in the country.

Against that backdrop, here’s a little perspective:

FACT: Largest spill reported in the study was a freshwater spill

Media outlets like the BBC were quick to pounce on the largest spill in the study, pointing out it was hundreds of thousands of liters. But those numbers aren’t quite so scary sounding when you realize the largest spill of all was a freshwater spill. From the study:

In fairness, the study does point out that if a worker spills a reportable amount of freshwater — meaning it has no contaminants, chemicals, etc. in it — regulators will record that as a spill or release. From the study:

So in North Dakota for instance, if a worker spills one barrel (42 gallons) of water on or off containment, there has to be a record for it. In Pennsylvania, five gallons is the amount allowed before a spill has to be reported, even if it’s freshwater.

FACT: Vast majority of spills are contained on the well pad and never impact the environment

The most important fact when looking at spills is whether or not it impacted the outside environment.

States like North Dakota and Pennsylvania have more reported violations because they require operators to report spills at far lower volumes than other states, and regardless of whether or not the spill left containment.

Considering that the 2016 Duke study analyzed 3,900 brine spills in North Dakota from 2007 to 2015, it’s a fair statement to say that the majority of the 4,453 spills the 2017 study looked at in the state were these same brine spills. That’s important because in 2014 the New York Times created a database that showed that 78 percent of brine spills nationwide between Jan. 1, 2006, and Oct. 13, 2014, were contained on site and never affected the environment.

It’s also worth pointing out that as production in North Dakota increased by almost 400 percent from 2010 to 2014, the number of brine spills declined by over 50 percent on a per barrel basis.

Also, E&E News reported in a 2013 article that, “nearly 80 percent of the spills in the state were contained to the well site” in North Dakota.

Similarly, North Dakota Department of Health data shows that 70 percent of spills reported between Nov. 1, 2012, and Nov. 11, 2013, were contained on site.

The most updated information for 2016 shows that nearly 77 percent of all reported spills in North Dakota were entirely contained and thus had zero environmental impact, and that 58 percent of 2016 North Dakota spills were 10 barrels or less.

These statistics are significant considering the new Duke study notes that more than 67 percent of the spills identified in the report occurred in North Dakota.

Across the country, well sites are designed to mitigate risks and contain any fluid spills whenever possible, as the following infographic for North Dakota shows. 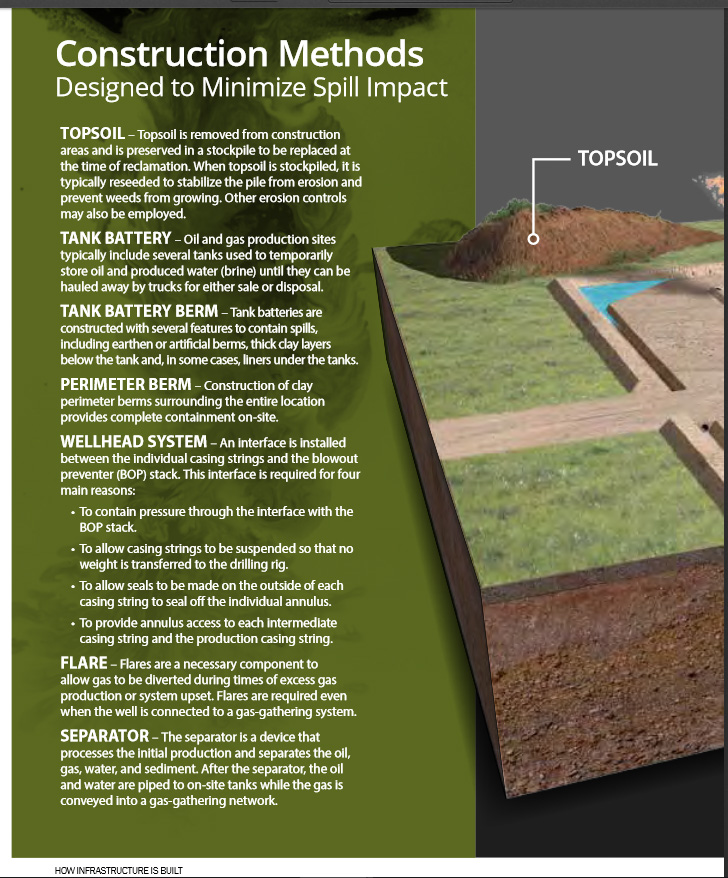 FACT: 10 freshwater spills in North Dakota accounted for at least 10 percent of the total volume of all 6,648 spills

While the overall number of spills that were considered freshwater in the study is relatively low — 46 overall, with 41 such spills in North Dakota — the volumes of those spills makes up a relatively large chunk of the total volume of 12,350,000 gallons. That’s an important factor that’s glossed over in the study.

But it’s significant for other reasons, including the potential for environmental impact. Since the report doesn’t give exact figures for the other nine other freshwater spills of more than 26,417 gallons in North Dakota, we’ll go conservative and place them right at the 26,417 gallons even though they actually exceeded that amount. That’s 1,228,953 gallons for the 10 spills.

Alison Ritter, a spokeswoman for the North Dakota Department of Mineral Resources told E&E News that in 2012,

“The four biggest uncontained spills were all “fresh water” … Other than the freshwater spills and the November pipeline leak, Ritter said, “it would actually indicate numbers went down.”

In other words, volume makes a difference.

All of these elements must be taken into account when discussing the potential impacts of any industry on the environment or public — what might have spilled, how much of it spilled, and was that spill contained or did it reach the outside environment? The industry can always work to improve on the number of spills — and every industry should continuously strive for improvements. However, to give the number of spills without offering any context to the public, simply allowing them to draw their own conclusions on what the areas surrounding those spill sites must look like, is irresponsible at best.

Producers have worked closely with scientists and regulators to prevent and mitigate spills. North Dakota has formed a saltwater spill task force made up of university experts, industry representatives, and state regulators.  Ten of the biggest companies in the Bakken, led by Continental Resources, have partnered with researchers at the University of North Dakota to form the Energy and Environmental Research Center (EERC) – a program to “with the goal of simultaneously improving Bakken system oil recovery while reducing its environmental footprint.”  A large part of that effort is focused on spill prevention and mitigation.

No industry is 100 percent risk free, and so the steps taken to prevent environmental or public harm if something were to go wrong are some of the most important plans laid out by a company. These specific wellsite designs that have been adapted by operators in various plays, often long before regulators get them in the books as requirements, are a major factor in mitigating these risks.