The city of Los Angeles has joined the list of California municipalities banning the installation of most natural gas appliances like stoves and furnaces in the construction of new buildings.

The policy from the city council will also direct departments to develop a plan by the end of 2022 “that will require all new residential and commercial buildings in Los Angeles to be built so that they will achieve zero-carbon emissions,” which essentially mandates electrification for cooking, clothes drying, and heating.

The timeline of implementation isn’t yet clear, and details will be left to city agencies to draft a regulation and bring it back to the council.  The issue had seen little movement in Los Angeles since the city council’s first took a look at electrification in December 2021, but will certainly face a heated commentary period that focuses on affordability.

Los Angeles’ anti-natural gas motion passed because of “the urgency of the climate emergency,” but failed to address the standing of residents, leaving the policy details to be determined based on comments in the city’s upcoming Climate Equity LA Series, which will include workshops and community focus groups. According to the recent motion:

“The City must develop a holistic approach to carbon neutrality and sustainability in our built environment, which centers on equity, energy justice, housing justice, and environmental justice. Any new construction decarbonization ordinance, moreover, should be shaped by the testimony and insights that emerge from the [Climate Equity LA Series].”

And while the councilmembers believe the challenges they face in transitioning are not insurmountable, there are very real concerns to their constituents’ immediate and continued needs that threaten their standard of living and housing affordability. In their December motion, the Energy, Climate Change, Environmental Justice and River Committee noted:

“According to a 2019 study of LA’s Promise Zones in Central and South L.A., 73 percent of renters are ‘housing burdened,’ and, according to a 2020 study by the American Council for an Energy-Efficiency Economy, 21 percent of renters are ‘energy burdened.’ Across the City, many renters are on the brink of displacement as a result of COVID-19-related job loss. Existing City laws and programs allow landlords to pass the upfront costs of building improvements onto tenants. Safeguards must therefore be put in place to prevent unintended negative consequences of decarbonization, such as increased rent burden, housing unaffordability, and displacement.”

Against this backdrop of housing and energy burdens, this electrification mandate was passed amid a surge in electricity prices across the state. Electricity prices of the three biggest utilities in the Golden State have passed the national average, with bills projected to keep climbing.

A study by the California Energy Commission in 2016, found that any modest increase in utility price would threaten the then-33 percent of California’s households classified as low income with mass shut-offs and economic dislocations. Since then electricity prices have only risen and housing become more unaffordable. 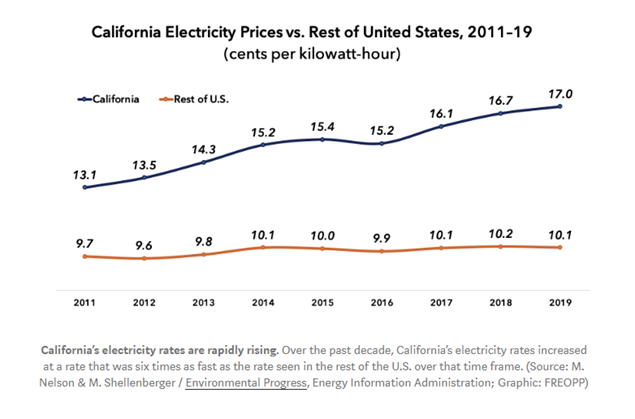 According to E&E News, the “the CPUC identified at least 17 state mandates that hike the price of power. Those include legislative measures that increase the share of electricity that come from renewable power sources and energy efficiency programs.” Electrification mandates in Los Angeles are sure to add upward pressure to local prices.

That’s part of the reason that other blue states around the country are rejecting natural gas bans.

And while the cost of being an early mover to all-electric residents means higher costs, it doesn’t necessarily mean being free of the gas grid. California’s Gridworks recent Gas Resource and Infrastructure Planning for California explains that a gas transition must maintain affordable gas rates by decreasing system costs relative to the current trajectory for gas delivery system spending, while increasing non-ratepayer revenue streams to avoid stranded assets and continue to reduce gas safety risks.

Los Angeles doesn’t have the same assurance that their residents can pay the higher energy costs. The city’s median household and per capita income are below the state’s average, and the rate of persons in poverty is higher.

With prices as they stand and the continuing trend to more costly electric rates, Mark Toney, executive director of the Utility Reform Network, believes that California doesn’t have a strategy for incentivizing people to electrify or reduce rates that make electrification look affordable when compared to the alternatives.

Community groups, including the LEAP LA Coalition, have also expressed concern that focusing on electric appliances in new buildings without doing enough to address existing buildings will concentrate air quality improvements and localized benefits among those who are able to afford them, further contributing to housing and environmental inequality.

As it stands, the funding necessary to make electrification work for the community and not hyper-localize benefits, prevent inequality, and keep prices affordable has yet to be determined.