Workers in the natural gas sector are among the highest wage earners in the U.S. energy industry, with oil workers not far behind, but some other energy sectors are lagging, according to a new report from several leading energy think tanks, research, and advocacy groups.

Published by the Energy Futures Initiative, the National Association of State Energy Officials, and BW Research Partnership, “Wages Benefits, and Change,” reveals that not only are American natural gas and oil workers well compensated compared to many other energy employees, but that their sectors by far have the largest total employment among those in energy production.

According to the report, natural gas workers have a median hourly wage of $30.33, which is a 58.5 percent premium compared to the national median wage of $19.14. It means that natural gas workers earn the second highest wages of those who produce energy, behind only the nuclear sector.

Oil workers have a median hourly wage of $26.59 – a 38.9 percent premium compared to the national median wage. 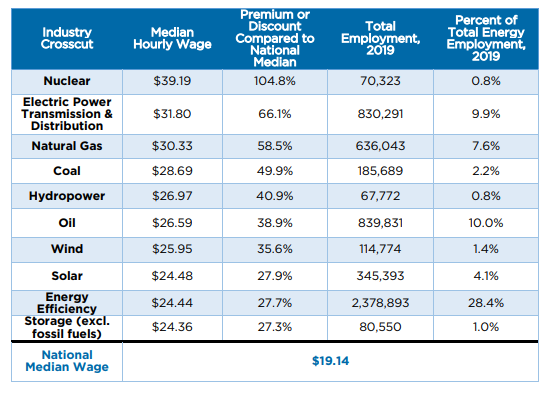 Natural gas and oil workers also comprise the two largest sectors by total employment of those who produce energy with 636,000 and 839,000 workers, respectively.

Notably, the natural gas and oil sectors far outpace wind and solar in both wage wages and total employment. As Politico noted, this poses a significant challenge to the Biden administration that is looking to “replace” jobs in the oil and natural gas industry:

“The highest-paying positions generally gravitate toward nuclear, utility and natural gas and coal workers, while wind, solar and construction jobs fall well below them in median wages, according to data by former Energy Secretary Ernest Moniz’s clean energy think tank. That could be a major blow to Biden’s message that the energy transition he hopes to facilitate with his infrastructure package would create more higher-paying jobs for Americans.”

Yet, natural gas should not be seen as an opposing force against wind and solar. In fact, a strong natural gas sector provides reliable, dispatchable fuel for power generation that perfectly complements renewables. As the Washington Post observed several years back:

“Because of the particular nature of clean energy sources like solar and wind, you can’t simply add them to the grid in large volumes and think that’s the end of the story. Rather, because these sources of electricity generation are “intermittent” — solar fluctuates with weather and the daily cycle, wind fluctuates with the wind — there has to be some means of continuing to provide electricity even when they go dark. And the more renewables you have, the bigger this problem can be.

“Now, a new study suggests that at least so far, solving that problem has ironically involved more fossil fuels — and more particularly, installing a large number of fast-ramping natural gas plants, which can fill in quickly whenever renewable generation slips.” (emphasis added)

This strategy is appearing in practice in Colorado where Xcel Energy, the state’s largest utility, is relying on natural gas to balance out its growing use of renewables, as CPR News reported:

“Xcel, like other utilities, hopes to use natural gas to supply reliable power even as renewable sources fluctuate with the weather. … The proposed plan from Xcel Energy calls for 1,300 megawatts in ‘dispatchable’ generation to balance the power supply.”

This underscores the strong role that natural gas plays in the American energy mix and that having plenty of well-paid jobs in the sector is not only good for the national economy but plays a key role in supporting the growth of renewables.