A new study from IHS Economics – commissioned by the National Association of Manufacturers (NAM) – highlights the impact of crude oil pipelines and associated infrastructure on U.S. manufacturing growth and employment. The study concluded that as pipeline infrastructure expands across the country, the opportunities for American manufacturing also increase.

Some of the highlights from the IHS Economics study included:

With the U.S. now leading the world in oil and natural gas production, operators are looking to midstream companies to develop the necessary infrastructure to bring this domestic resource to market. And because of the prolific nature of shale plays around the country, commodity prices have dropped to decade lows which has helped spur investments in energy intensive manufacturing. According to the IHS Economics study:

A total of 24.1 jobs per mile would be created in the U.S. from crude oil pipeline construction, including 3.2 manufacturing jobs per mile. (Pg. 6)

The report also highlighted how investments in infrastructure picked up as shale development increased across the country. According to the IHS Economics study:

Thanks to the development of the Utica and Marcellus shales, one of the largest pipeline projects in the Appalachian region is set to begin construction next month. The Sunoco Logistics Mariner East 2 pipeline project will bring natural gas liquids – propane, ethane and butane – being developed in Ohio’s Utica Shale, through West Virginia, across Pennsylvania and into the Marcus Hook Industrial complex, just outside Philadelphia. 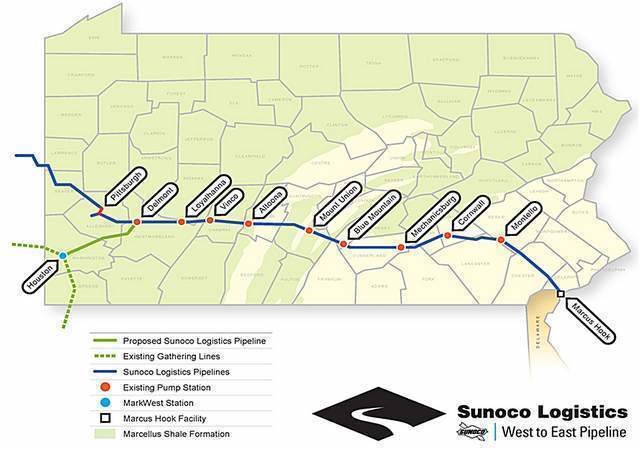 In a recent Op-Ed in the Pittsburgh Post-Gazette, Leo W. Gerard, International President of the United Steelworkers supported the Mariner 2 Pipeline project highlighting its support of manufacturing and local union workers:

As the steel industry continues to navigate its way through consolidation and compete against cheap foreign steel imports, the industry has seen new hope with the shale-gas boom, particularly in Pennsylvania. Key to fueling a resurgence in American manufacturing is low-cost, abundant energy, and the natural-gas and oil boom is providing it. Unfortunately, Pennsylvania still lacks the pipeline infrastructure to move the products to where they’re needed.

The 350 mile pipeline is Pennsylvania’s largest private investment totaling $3 billion and is expected to support 30,000 jobs during construction. Once completed, the pipeline will generate $100 million to $150 million in annual economic impact and support 300 to 400 full time jobs. Gerard also highlighted how increased infrastructure will spur even more economic development stating:

“Additionally, easy access to an abundant supply of affordable energy will encourage more companies to do business in our region, spurring even more jobs and new economic activity for existing businesses.”

The IHS Economic report highlights the next era of shale development in the U.S.: infrastructure. It is clear that these projects are not only vital to keeping America’s oil and natural gas industry competitive with foreign markets, but they’re also vital for America’s manufacturing industry. As more pipeline infrastructure like the Mariner East 2 project continues to build-out across the U.S, we can expect areas similar to the Marcus Hook region to again become the booming energy hubs they once were.