Ohio landowners recently traveled to Washington, D.C. to discuss the continued Bureau of Land Management (BLM) delays that have resulted in a seven-year prohibition of oil and natural gas development on private acreage adjacent to and under the Wayne National Forest.

The National Association of Royalty Owners (NARO) and the Landowners for Energy Access and Safe Exploration (LEASE) recently took their plight to Washington to plead with President Trump, the U.S. Department of Interior, and bipartisan members of Congress to put an end to, what they call, years of red tape that has blocked the development of private minerals in what could be one of the best producing shale fields in the state.  Becky Clutter and Janet Witten Conn, both volunteer board members of the NARO Appalachia Chapter, said,

“The Wayne National Forest mineral development debate has been and continues to be a private property rights issue. The majority of the surface and minerals are privately owned. Federal bureaucrats are violating mineral owners’ private property rights—it’s been going on too long and property owners want to see this resolved. Individuals who work in these federal agencies have been instructed by recent actions taken by President Trump and Secretary Zinke to move these lease sales and permits along, but they aren’t doing it. It’s more than dereliction of duty, its obstructionism—and private property owners are fed up.” (emphasis added)

The following is a timeline of these events over the last seven years that NARO and LEASE produced for their recent trip:

The Wayne National Forest is a patchwork of federal and private minerals, as the following NARO maps show: 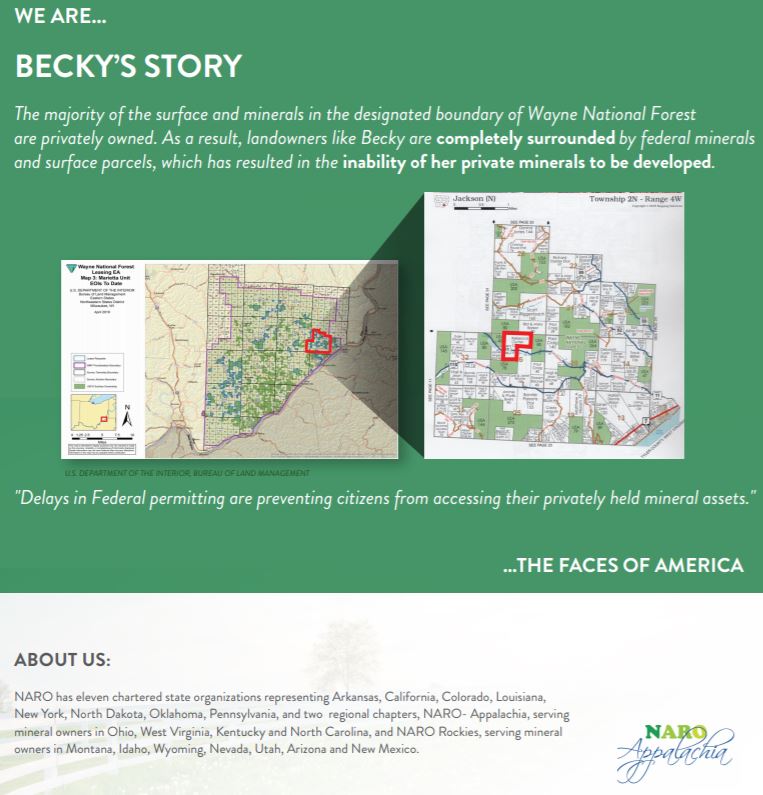 Monroe County Treasurer Taylor Abbott explained the division of federally-owned versus private properties in the Wayne to EID, saying,

“There are six townships in Monroe County that are included in the boundaries of the Wayne National Forest, of those six townships 90 percent of the minerals are owned by private citizens; only 10 percent are owned by the federal government. The landowners who are surrounded by the Wayne are losing out by these roadblocks. The federal government is using their 10 percent interest to hold 90 percent of private landowner interest hostage. No one is listening to us, the local people who live here in Monroe County—the local elected officials. This lawsuit [from the Center for Biological Diversity] could go on for years and we don’t have that kind of time. The oil and gas industry will go elsewhere.” (emphasis added)

As Abbott described, six townships in Monroe County have 92,095 acres that include 22,981 acres of Wayne National Forest and 22,981 federal surface ownership acres – the federal government only owns mineral rights for 9,192 acres, or 10 percent of the total acreage. In other words, thousands of landowners are surrounded by Wayne National Forest parcels of land and subsurface federal minerals.

It appears that at least part of the reason for these delays has been a lawsuit the Center for Biological Diversity (CBD) filed against the BLM in May 2017. EID found that not one Application for Permit to Drill (APD) has been issued by the BLM since the CBD lawsuit was filed. The BLM did, however, issue two permits in 2016, prior to the October 2016 final Environmental Assessment for Oil and Gas Leasing, Wayne National Forest, Marietta Unit of the Athens Ranger District, the succeeding December 2016 federal auction lease sale and months before the CBD lawsuit. In addition there have not been any lease sales of federal minerals since March 2018, although one was scheduled just this week for September.

These ongoing delays caught the attention of the U.S. Committee on Natural Resources Subcommittee on Oversight & Investigations, which recently held a hearing entitled, “The Weaponization of the National Environmental Policy Act and the Implications of Environmental Lawfare.” During the hearing, testimony was heard from Horst Greczmiel, Former CEQ Associate Director of NEPA Oversight, who acknowledged that it is fear of litigation driving [federal] agencies to “excessive documents.” Greczmiel addressed his opinion of the delays with the Wayne National Forest permitting, testifying that he would be asking,

“Why is it since the close of the [Wayne National Forest APD] comment period in November that we haven’t heard anything [from the BLM] since then?”

The BLM delays also were a focal point of a recent hearing of the U.S. Committee on Natural Resources Subcommittee on Energy and Mineral Resources, where U.S. Rep. Bill Johnson (OH-R) stated,

“After years of environmental reviews the BLM has agreed to allow leasing for oil and gas in shale in the Wayne National Forest. Multiple auction sales have already produced over $8 million for taxpayers thus far, and once companies begin to receive their permits more dollars will be sent to the federal government’s coffers. It is critical that the BLM and USFS work efficiently on these applications. Because it’s been almost a year since the first on-line auction leases were obtained yet not a single permit to develop subsurface minerals has been issued.”

About two months after Chairman Rob Bishop’s hearing, the U.S. Department of Interior issued an updated Permanent Instruction Memorandum No. 2018-014, which included significant changes to its regulations for well pads situated on non-federal land that directionally drill into federally-owned minerals – which is exactly the case for the Wayne National Forest drilling units mentioned above..  However, it is unclear if the instruction memorandum will allow BLM to issue permits or if the litany of CBD lawsuits against the agency will result in even further delays.

To date – even with the new Instruction Memorandum – the BLM has not approved any pending APDs. And that is why the landowners and elected officials in Monroe County are so upset with the current situation.

Local Schools Have a Lot to Lose

Oil and natural gas production in the Wayne National Forest is not new. In fact, there are currently over 1,200 producing conventional wells on the surface of the forest.

Oil and natural gas production from existing wells pays a royalty to the state government, with a portion going back to the local governments within the boundaries of the Wayne National Forest.  For example, the annual mineral payment to local Ohio governments and communities in 2003 – nearly a decade prior to Ohio’s first shale well – was $14,822.

Today, thanks to the discovery of new shale reservoirs, Ohio’s oil and natural gas operators have paid  over $8 million  just to lease federal minerals – that doesn’t even include possible future royalty payments.

In fact, local Ohio communities just received another payment from those federal lease sales last week that brought the 2018 lease payment total to over $600,000. From the Wayne National Forest press release,

“The Department of the Interior distributes mineral payments from federal mining activities (lease sales, royalties, rents, and bonus payments) on federal land with the state where the activity took place. As of June 29, 2018, counties have received $645,328 in 2018. In addition, funds were also paid for road projects, cooperative law enforcement agreements, and volunteer fire department support.”

The contrast before shale and after, as it relates to mineral payments from lease sales and royalty payments is simply staggering. As you can clearly see, the annual mineral payment was $14,822 prior to shale in 2003 compared to $645,328 distributed today. That’s an increase of 4,253 percent since 2003!

According to landowners, those mineral payments could be far higher if more federal auction lease sales were made available, and more importantly, if these federal minerals were actually put into production – which is precisely why landowners and the local Wayne National Forest communities are concerned that these ongoing delays may be devaluing minerals in the region.

Ohio landowners were not the only ones taking their case to Washington, D.C. District Superintendent of Switzerland of Ohio Local Schools Jeff Greenley recently testified during a legislative hearing on the Providing Opportunity with Energy Revenues in Counties Act (POWER Counties Act), explaining,

“Proceeds from the drilling in Wayne National Forest could bring back art and music in our schools, both of which were heavily cut in years past. We could invest in the physical, mental and behavioral supports that the high poverty students we serve need in order to be successful. We could provide our students with a vision for the future and the hope that they need to meaningfully engage in their studies.”

One thing is clear: Communities and private property owners along the Ohio River want to be heard and feel strongly that they have a right to see their private minerals developed – and over the years they have had the backing of state, federal and local lawmakers, as well as statewide labor and business groups that have advocated for oil and gas development in the Wayne National Forest. As NARO board member, Janet Witten Conn told EID,

“It is time for the BLM to respect private property owner’s rights and answer our questions and inquires accurately and honestly. It is also time for the BLM and WNF to take action and resolve the issue of drilling in Wayne National Forest. Agencies and individuals so far removed from the Marietta Unit of the Wayne National Forest in southeast Ohio continue to prolong the decision making process and do not want to hear from private property owners. We’ve had enough and we will continue to fight for our private property rights.”