Oil and natural gas production accounts for nearly a third of all revenue going into New Mexico’s general fund –  $2.2 billion in FY2018 – according to a new report from the New Mexico Oil and Gas Association.

Last fiscal year, these contributions from oil and gas resulted in $822,300,441 in funding to public k-12 schools, according to NMOGA’s report, which notes this dollar figure could cover the salaries of 11,496 teachers, or pay for 11,747,153 textbooks.

The general fund supports the state’s administrative and essential expenses, including education, infrastructure and public safety.  The majority of energy contributions were driven by taxes paid by the industry and federal mining leasing.

As oil and natural gas production in the state has grown, subsequent contributions to the general fund have risen. From FY2017 to FY2018, revenue attributed to the industry increased by $465 million. This windfall has enabled increased education spending.

In early April, Gov. Michelle Lujan Grisham authorized an increased budget of $7 billion – an 11.6 percent increase in fiscal spending. This expanded budget included generous increases in education, from $446 million to $3.2 billion. It allows for much-needed raises to teachers: a 6 percent pay increase for educators and higher minimum teacher salaries. 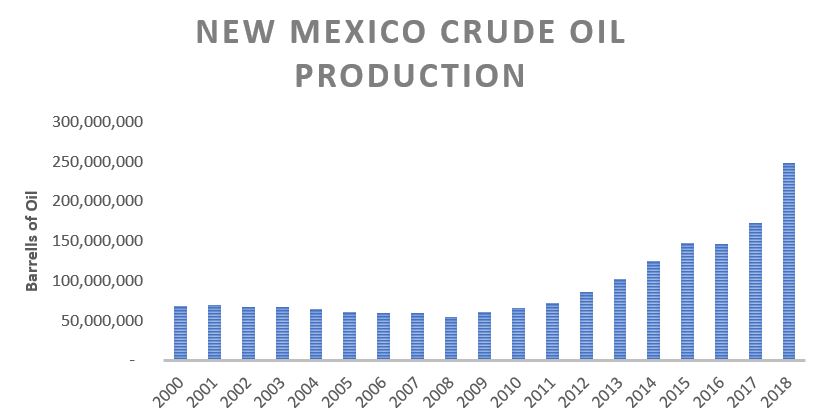 Since 2000, New Mexico energy production has exponentially increased. The state has seen recent development around the Permian basin, which covers the southeast corner of New Mexico and extends into West Texas. Crude oil production in the state has risen 361 percent from 2000 to 2018, and natural gas production increased 13 percent between 2017 and 2018 alone. State officials  predict oil and natural gas will continue to push revenue growth in coming years.

“The future is very bright for New Mexico, and we can expect these trends to hold for the foreseeable future if New Mexico remains a favorable place for oil and natural gas producers to do business.”