The consensus from CERAWeek is out: natural gas is a key component of the world’s energy transition.

Throughout CERAWeek, which took place the first week of March and brings together political leaders, executives, and energy’s most prominent thought leaders, one topic remained top of mind: the energy transition.

As climate change becomes an ever-pressing issue, the wider energy community discussed how nations, industries and markets will shift to meet ambitious emissions goals. Many underlined that clean burning natural gas will be critical to that shift, thanks to its abundance and affordability.

Corporate leaders stand by natural gas in a low-carbon future

“Hydrocarbons are still going to be essential for providing energy to the world, especially in the near term.”

CERAWeek illuminated the confidence many energy executives have in natural gas, and its potential to help reduce climate change. As Michele Harradence, SVP and chief operations officer of Enbridge, explained:

“The most important thing to continue to impress upon the policymakers is natural gas can and should be a big part of the climate change solutions.”

Harradence’s comments were echoed by many others at CERAWeek, including Williams President and CEO Alan Armstrong:

“I would say we have very effective tools here in the U.S. in the way of our natural gas grid, in low-cost natural gas to continue to de-carbonize. If we would look to those opportunities to work together… we have a lot of opportunity.”

The winter storms that recently bombarded Texas illustrated the need to continue to invest in energy infrastructure and the grid, particularly as extreme weather events increase. As Chevron CEO Michael Wirth said:

“As we’ve seen recently in Texas and not too long before that in California, when the demands on a grid are at an elevated level we need to make sure we have reliable grid management and reliable power supply. And natural gas should play a very, very important role.”

Natural gas will lead the energy transition – both here and abroad.

On the final day of CERAWeek, India’s Prime Minister Narendra Modi optimistically outlined the country’s commitment to lowering emissions, which includes increasing the country’s consumption of LNG. Under the Paris Climate Agreement, India has committed to reducing its greenhouse gas (GHG) emissions intensity by at least 33 percent by 2030 compared with 1990 levels.

Modi has previously outlined that natural gas and renewables will be staples in the country’s plan to decarbonize, explaining in January:

“India is set to nearly double its energy consumption over the long term.”

As one of the world’s largest producers of natural gas, the United States is set to supply a significant portion of India’s LNG demands. Since 2015, American exports of LNG to India have skyrocketed – rising to 124 million cubic feet (MMcf). 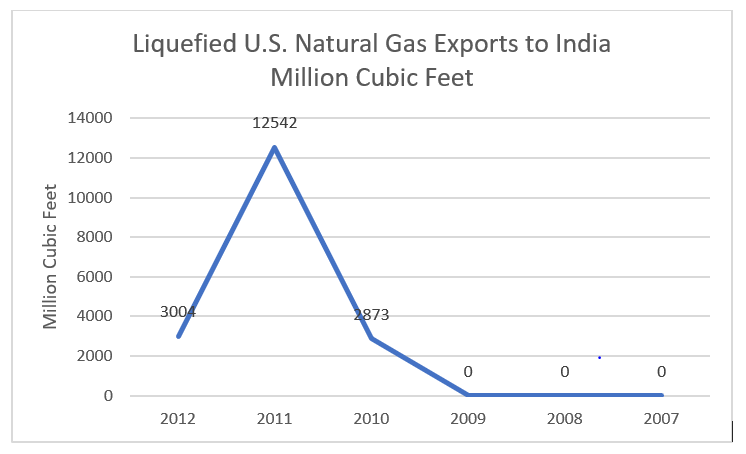 Energy leaders from other parts of the world at CERAWeek concurred with the sentiment that natural gas remains an integral component of their plans to lower emissions.

Saudi Aramco CEO Amin Nasser shared that in Saudi Aramco’s eyes, “…gas still has better credentials over other fuels, and it will grow significantly in a number of sectors, especially for power generation…”

Saudi Arabia expects to drastically shift its energy mix towards a combination of natural gas and renewables. Nassar noted that the Kingdom aims to have 50 percent of its power generation come from natural gas:

“In the Kingdom, and for Saudi Aramco, we are growing our gas substantially, and by 2030, we will have a significant amount of gas, to the point where approximately 50 percent of the grid in the Kingdom will be on renewables by 2030, and 50 percent will be on gas. We are using both conventional and unconventional gas resources to grow our volumes.”

CERAweek brought together world leaders to discuss how the world is going to meet rising energy demand while meeting ambitious climate goals.

Through the panels, speeches, and interviews, it is clear that to some of the most influential voices in energy and across the world, natural gas is a clear-cut solution.