Polling continues to show that Americans support increasing the production of U.S. natural gas to aid Europe and are more likely to vote for candidates that support robust domestic energy policies, as the energy crisis and rising inflation remain top of mind for voters.

A  Sixty-one percent of Americans are in favor of expanding natural gas production to export to European countries, according to a May Pew Research poll. While a larger share of Republicans than Democrats favor increasing domestic production for export, the support was bipartisan: approximately 70 percent of Republicans and 55 percent of Democrats said they would favor exporting large amounts of natural gas to Europe. 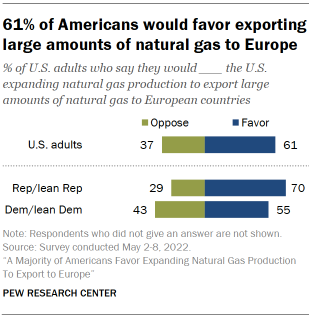 The survey also probed what kind of hesitations Americans feel towards expanding natural gas production for export. Impact on domestic prices is the main consideration:

The good news for these respondents is that historically, LNG shipments have not had major impacts on domestic prices. As the American Gas Association recently explained, U.S. natural gas prices in April rose to the highest level since 2008 (around $7 to $8 per MMBtu), yet still remained far below prices in Europe and Asia (above $30 per MMBtu). AGA further explains what is contributing to the rising prices:

“This winter, natural gas demand outpaced supply growth, even though natural gas production ended 2021 at record levels. Additionally, underground storage inventories are lower than average, and liquefied natural gas exports remain at historic levels…The difference between supply and demand has led to a net draw on storage inventories. As a result, inventories are lower relative to history, and the higher market pricing signals a need for additional supplies to rebuild stocks.”

But, as AGA discusses, natural gas supply is anticipated to grow as well:

“Like most commodities, natural gas prices are subject to supply and demand forces. Moreover, prices are a signal to the market to bring new supplies online. Production has continued to grow steadily since the pandemic and reached record-setting levels in 2021. Current forecasts show that natural gas will continue to be accessible and that production is likely to continue to grow in 2022 and beyond.”

Backing up these findings, NBC polling from May and March shows that addressing inflation and high prices – particularly high gasoline prices – are some of the most popular positions a candidate can endorse in 2022. In March, 69 percent of registered voters polled say they would be more likely to support a candidate “who supports expanding domestic oil and natural gas production to keep our gasoline and energy prices lower.” Only 17 percent say they would be less likely to support a candidate who supports expanded domestic production.

“Tackling inflation and high prices are among the most popular positions and qualities a 2022 candidate can have.”